Eurghhhh I feel so poooorly =( I was supposed to be having my sister up to stay with me this weekend, we were going to go shopping, to the Baltic, to the cinema and everything, but last night I started getting a sore throat, then I was awake all night and now I just feel awful =( It’s just a cold I think, but I haven’t had one this bad in ages. I thought last night I’d just torn my tonsillectomy scars because my throat was bleeding, apparently not…apparently my throat now bleeds when I have a cold…I don’t think that’s a good thing. I’m going to be very depressing today because I’m feeling sorry for myself and I’m bored so feel free not to read my ramblings. I had my tonsils out like a year and a half ago now (yes, a week before I started uni and therefore Freshers was agony), and since then I’ve barely had a sore throat, which I’m glad of because I had tonsillitis constantly for a solid year at least before I had them out and it was no fun =( One of my tonsils even ruptured, but I have a horrid doctor who apparently hates me, she said a tonsillectomy wasn’t necessary but eventually referred me to the hospital after I’d been to the doctors like every week for a year, when I got to the hospital I opened my mouth, the surgeon looked in for about 5 seconds and said: “Those need to come out as soon as possible.” So they did, and it hurt, but it was the best thing I did all that year probably. In fact health-wise, probably the best thing all my life, considering I’ve had bouts of tonsillitis since I was about 5, had it every year or so. I’m going to ramble some more about my health now (sorry!). I’m thinking about changing doctors now (yeh…should probably have done that before!) because when I was in having my tonsils out they told me I had a consistently rapid heart rate (it was between 110 and 130 all the time, never below 100, and it should be around 70-80). So anyway, I got referred for a load of tests on that, which came to nothing (so I still kind of have it), but they asked me during these tests whether I get chest pain at all and I was like YES I have been to the doctors so many times about this and they told me it was because of a cough/stress/old injury etc. Basically I’ve had these chest pains since I was about 15, on the left side on the lower ribs and they usually come as short stabbing pains which are agonizing (we’ve been on the brink of calling 999 so many times), and nowadays I’ve had them so much it’s more of a constant dull ache, with a feeling of discomfort all the time that’s actually making it harder and harder for me to wear waist belts and high waisted things (my favourites!). So basically they told me I have costochondritis, that is the swelling of the cartilage of the conjunctions of your ribs to your breastbone. I have recently found a fellow sufferer Sarah (who found me through my blog but weirdly she’s friends at uni with one of my best friends!) who had this picture on her blog: 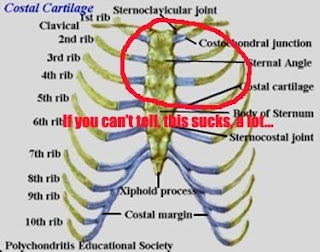 Yeh, so basically it hurts a lot. My point is though that once I was diagnosed at hospital they said my GP would deal with it….went to her, she told me to take 4 ibuprofen a day for 2 weeks, but after a week I started having stomach pains from this, plus it hadn’t been working, so I stopped. I have since seen her about it and get the same thing, just take ibuprofen. Since this isn’t very effective I just tend to grin and bear it, carry round ibuprofen gel everywhere, and that’s pretty much it. It’s now at the point where I have about 2 positions I can sleep in because everything else hurts, and I can’t have the duvet touch my ribs, it hurts. Having spoken to Sarah about it though I have discovered there are actually more options than this. She recommended ibutabs, which I’d never heard of, and you need to be referred for them, little chance of this with my doctor, hence why I want to change. Also she told me she has chronic costo, which I never heard of either, I was told mine was just an old injury flaring up (no idea what this injury was though?!), and now I’m pretty certain mine’s chronic too, so I’m hoping a new doctor will actually recognise it, a lot of them don’t or they think it’s something else since it mimics things like angina or heart attacks (yeh, that’s how painful it is). And the frequency of it has increased massively too, I’ve even had a minor attack of it while I’ve been writing this because of the position I’m sat in =( Right, I’m sorry for all that! Obviously it’s a massive problem in my life and it needed sharing with all of you at some point, so there you go! At least now I can talk about it without future explanation (well, if you managed to read all that anyway, if you did, please tell me and I’ll give you an award or something =D). Also if you want to recommend me anything exciting on the internet or anything, please tell me because I’m bored, lonely and sad because I couldn’t see my sister!
Love,