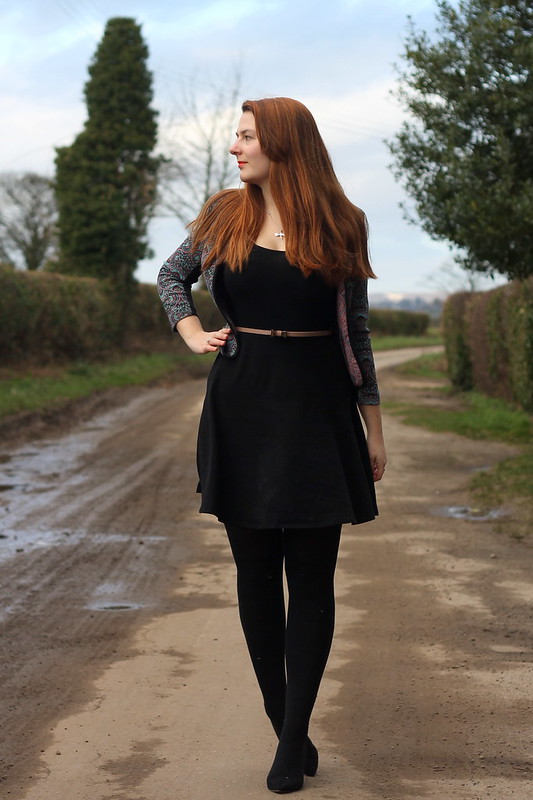 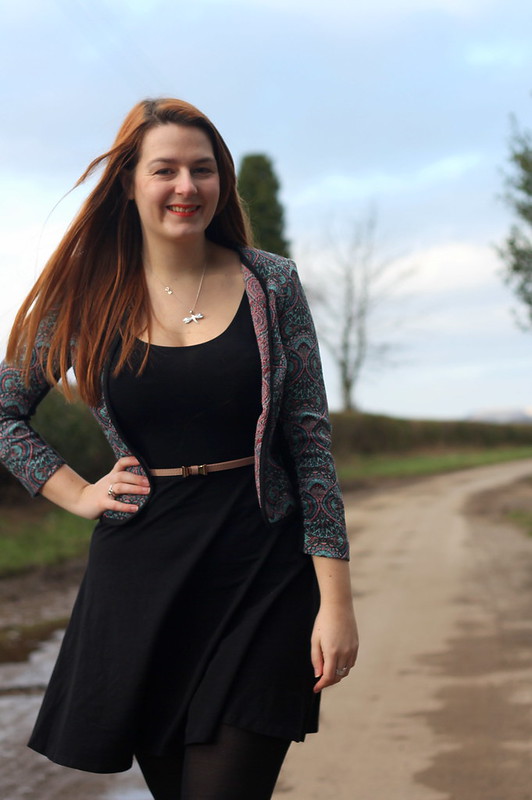 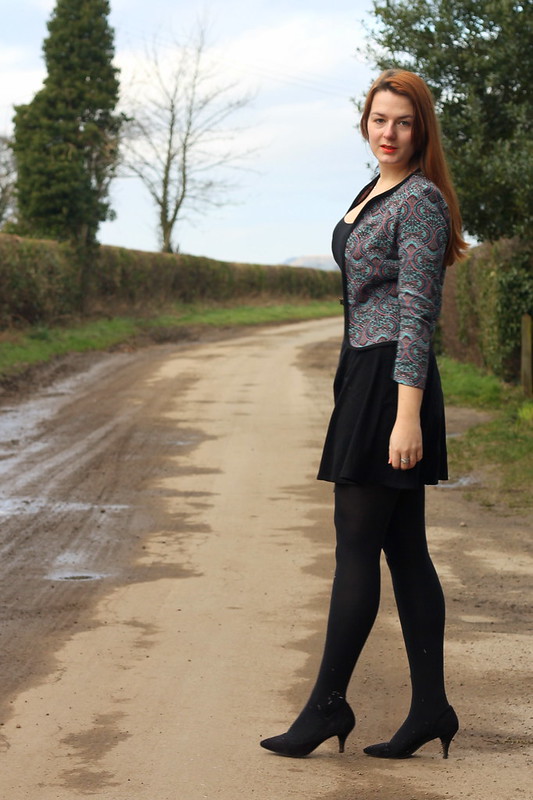 Tapestry Jacket: New Look
Black Skater Dress: New Look
Bow Belt: New Look
Heels: ASOS
I wore this outfit this week to work then out for an evening with my friends to a Chinese restaurant – I thought it was adequately dressed up enough for going out but not overly dressed up (which I usually am anyway so it doesn’t matter!). I’ve had this dress for a couple of years now; I actually bought it before I started teaching to have something to layer over blouses, but I think I maybe only wore it once or twice, and not often without anything underneath. It would have been too low cut for teaching without a layered blouse, and I think I had it in my head it was “too low” in general – I’ve been thinking about it recently and I don’t tend to wear low cut things very much because I’m wary of showing off too much cleavage. On someone else I would think it was fine, but there have been several occasions when I was younger that I was told off for wearing shirts that didn’t have enough buttons done up at school or wearing tops that were “too low” when of course most other girls were wearing exactly the same but had a lot less cleavage than I did. I was even once told off for wearing a roll neck jumper (this one) because it was too revealing, although these type of jumpers were in our dress code! Anyway, I was going to say it scarred me for life, but I think I’m being a bit melodramatic there! But it did put me off wearing anything that showed off the true size of my bust, and looking back through the pictures on my blog, you probably couldn’t tell unless you knew that I’m concealing a 28G bust under my clothes (and hair, as I’ve realised is one of my ‘tactics’ too), aside from the recent pictures in bras!! Anyhow, this dress hardly shows off much, but even Ben noticed I was wearing something much more low cut than I normally would. Looking through my wardrobe too, I realise that I’ve tried to avoid buying low cut clothes, so I’m going to try to stop doing that in future because it rules out a lot of options that are actually quite flattering on me! 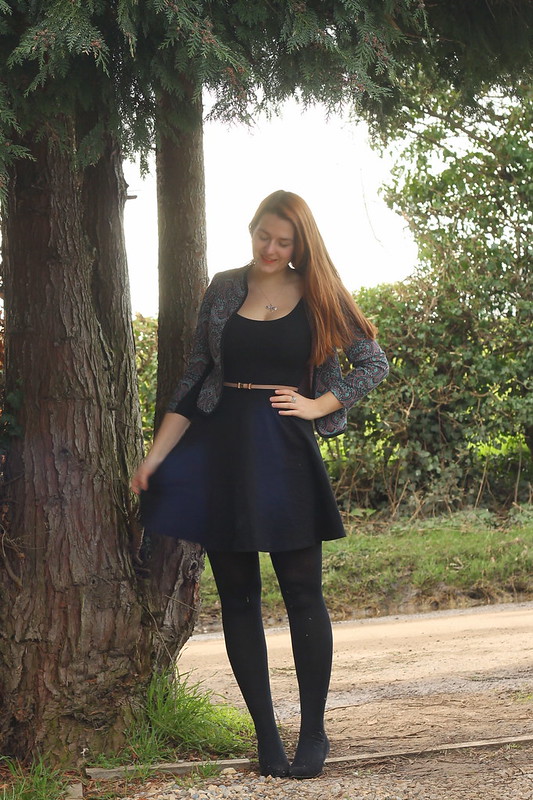 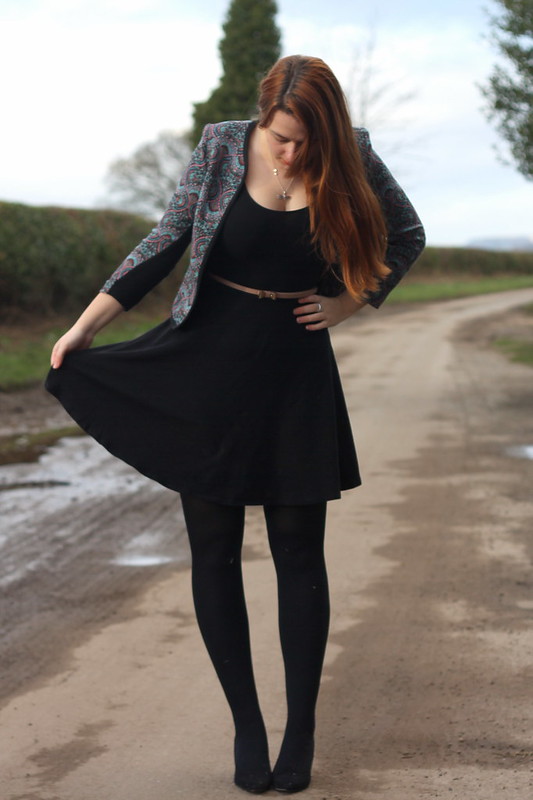 Right, done with all that ranting now! The newer part of this outfit is the jacket, which I’ve worn a couple of times to work now, last time with a plain black midi skirt that I got at the same time. I wasn’t sure whether to get the jacket, but I had a New Look giftcard that I’d been wanting to spend (to get it out of the way!) for a while, so decided to go for it. And I really love it! There have been similar around recently from everywhere from Primark to ASOS and Topshop, but this was £29.99, looks good, feels good quality and is nicely structured too.
In terms of shoes, I’m still obsessed with mid height court heels like these at the moment – as I’ve said before, they’re perfect for work because they’re not over the top high (which I can’t walk in anyway!) but still look fairly smart and stop my back from hurting from sitting all day! I have a couple of pairs of these plain black ones – these from ASOS and a pair from New Look – but I could do with some wedged heels like these too that are a bit more sturdy.
So as I said, I wore this outfit out for a meal with my friends. I was supposed to have choir that evening but forfeited it to see them since it was the only day we could manage between us, and one of us lives fairly far away. Plus I had a maternity bra to give to one of them to review on Big Cup Little Cup, which was kind of important as you’re not exactly pregnant for long! The restaurant is one of my favourites but I don’t go there with Ben or family anymore as apparently they’ve all gone off it, so it’s the best to get to go with my friends!
I finally managed to get some good outdoor photos again too for this post! I’d had a hospital appointment during the afternoon so I ended up being home a bit earlier than usual meaning it was still light! It’s only just dark when I get home at around 6pm now, so I’m looking forward to a couple of weeks when it’ll be light enough to get photos outside again after work. It took me a while to find my tripod for these (I swear, things just keep going missing in this house!) and nearly gave up, so I was really glad I did because these pictures turned out really well, so looking forward to getting more like this again! 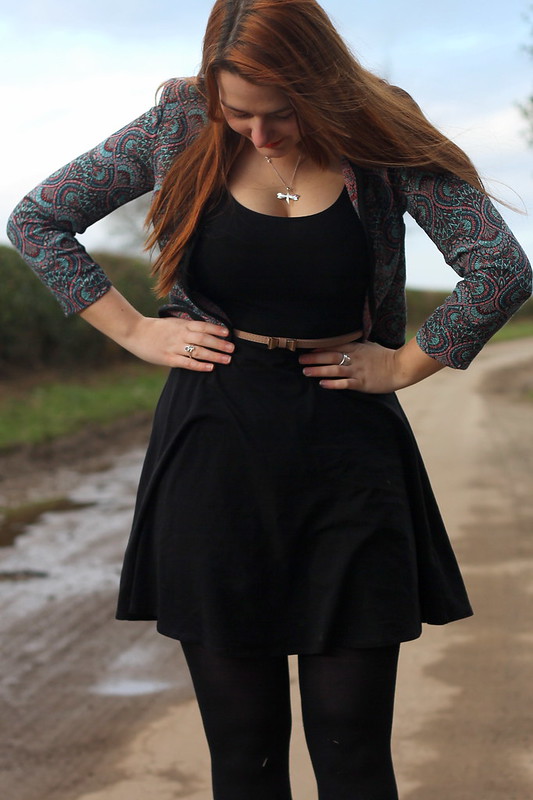 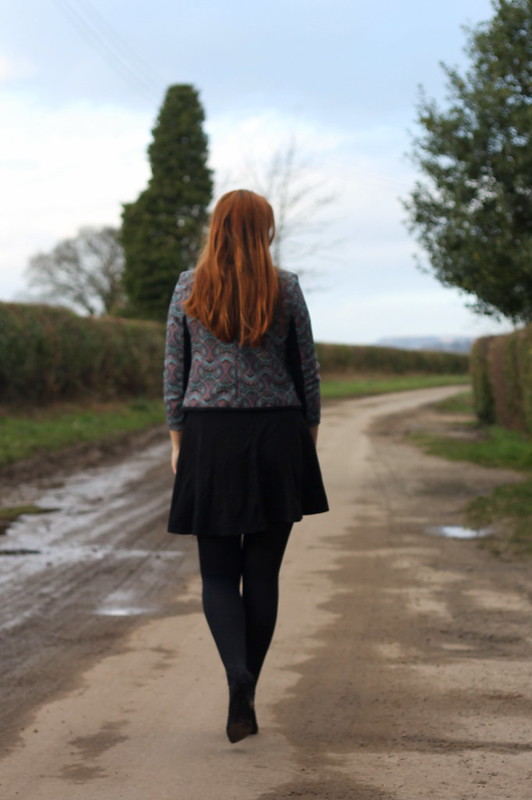