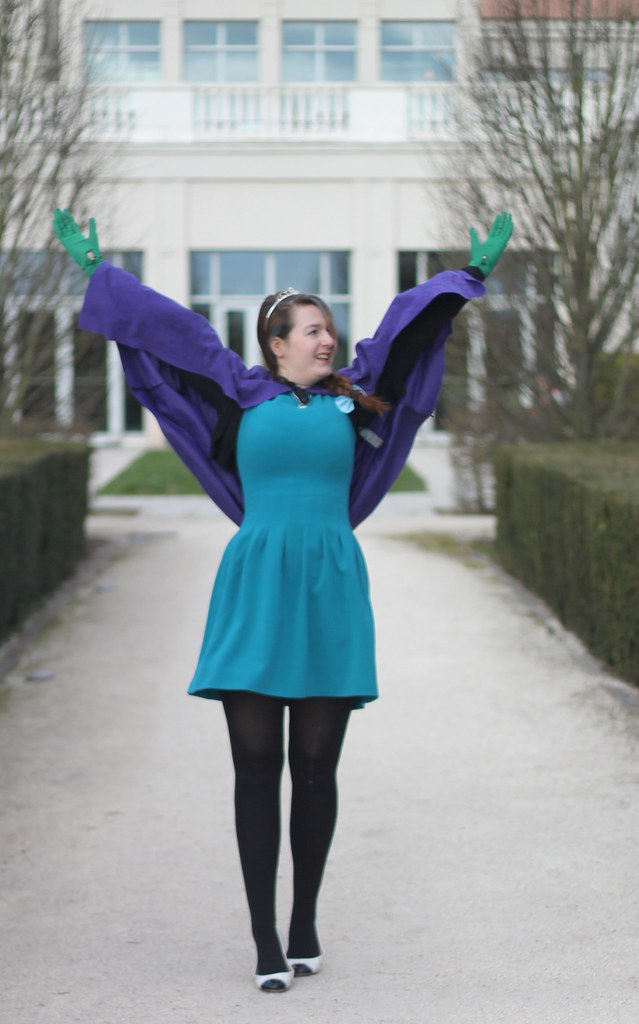 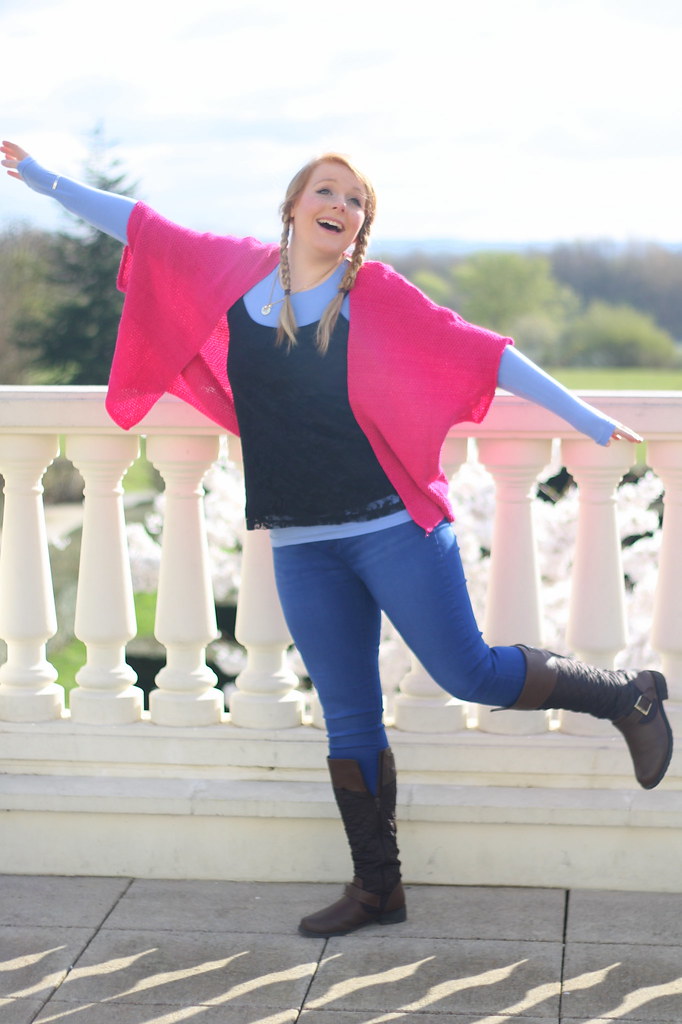 You might remember that a couple of weekends ago I went on a little trip with my sister, a trip to Disneyland Paris! It was our Christmas present from the parents, who managed to keep it as a surprise right up until the last present. We were told to leave the two flat square presents to open until last as they were our ‘main presents’, so we went excitedly through all the others and finally reached those. We tore off the paper to reveal….two calendars, mine a Minnie Mouse one. Now that was lovely, I like calendars and love Minnie Mouse, but we didn’t really see how a calendar was a ‘main’ present (not being selfish at all, just confused considering we’d already had bigger and better presents than those!). So my mum said, “I hope you like them! We’ve written in the Disney dates, look and see!” (We already had a trip to Florida to Disneyworld booked in April). So I started flipping through the pages and came across “Go to Disney” written in…March?! I twigged at that moment that something was going on, but Beth was still a little confused!! We then found the envelopes which held the confirmation of the booking at the Dream Castle Hotel at Disneyland Paris!! And finally, on March 21st the day came!
Last year I went with my friends to Disneyland Paris, and that was my first trip there although I’d been to Disney in Florida several times before. We decided on that trip to do a day dressed as Princesses, and you can see that post here. So my sister and I decided to do the same, only this time we would dress as the two new Princesses, Anna and Elsa from Frozen! My sister’s hair is pretty much the same colour as Anna’s, and being the little sister of the two, she’d reminded me of her the second we started watching the film, so it was a given she was going to be her. In reality though, I’ve got a lot more of Anna’s mannerisms – ie. the clumsiness, craziness and bursting into song at random. But I went for the older sister role of Elsa even though I didn’t have white hair!
So, we took a lot of pictures, a lot a lot! I’ve cut out quite a few, but I’ve still got a lot to show you! So I’ll just throw all the pics on of each costume/outfit and explain a bit about them, hope you enjoy 🙂 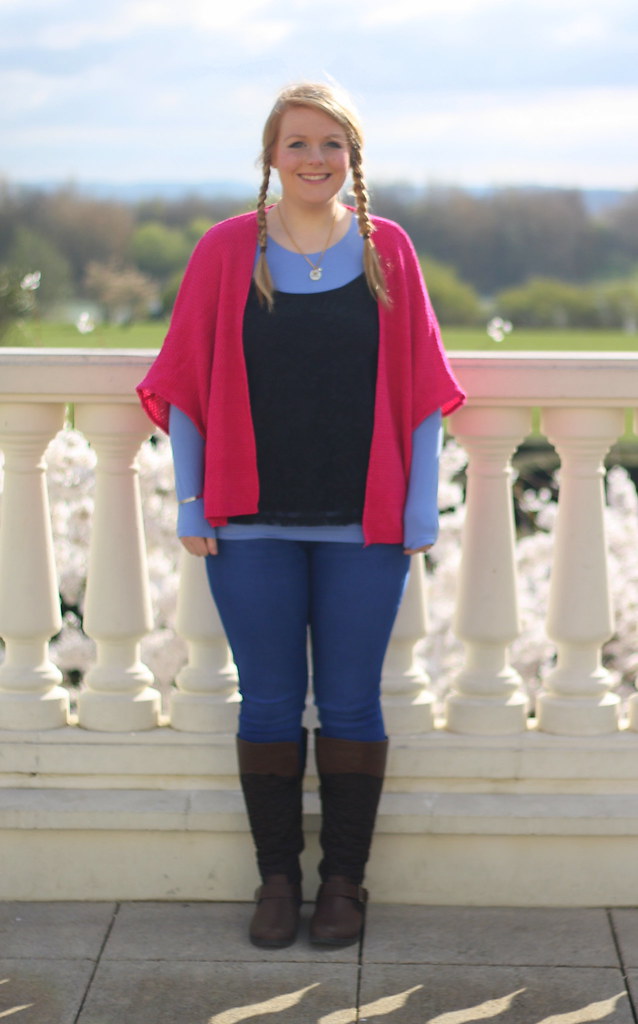 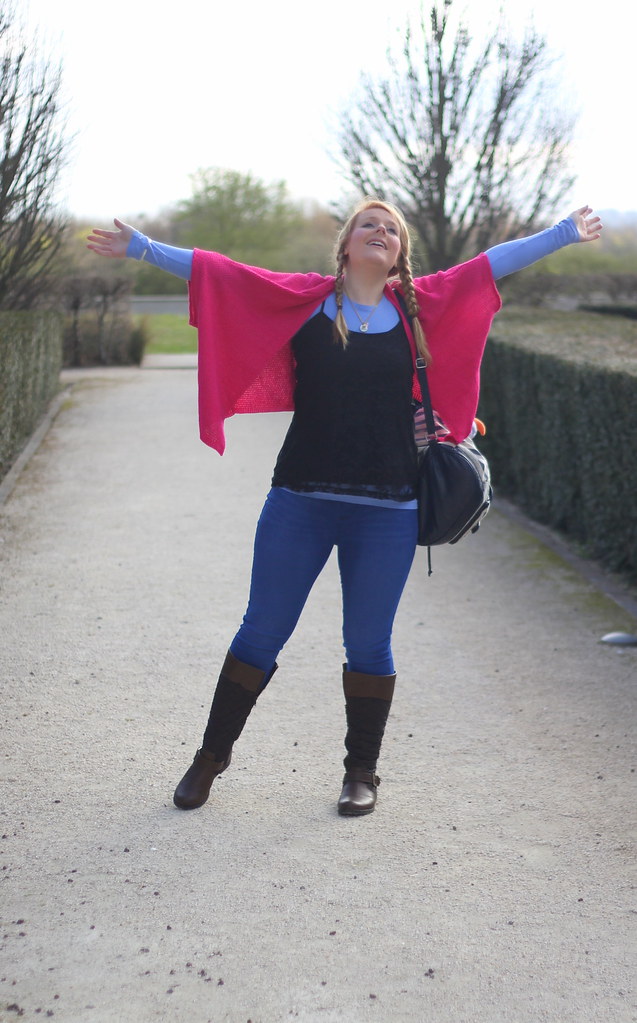 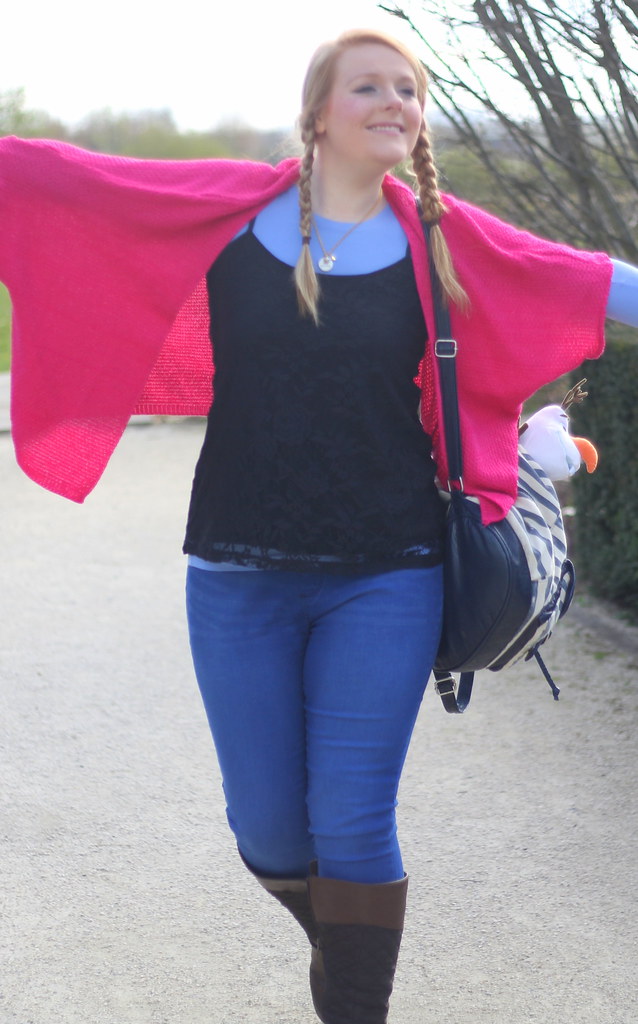 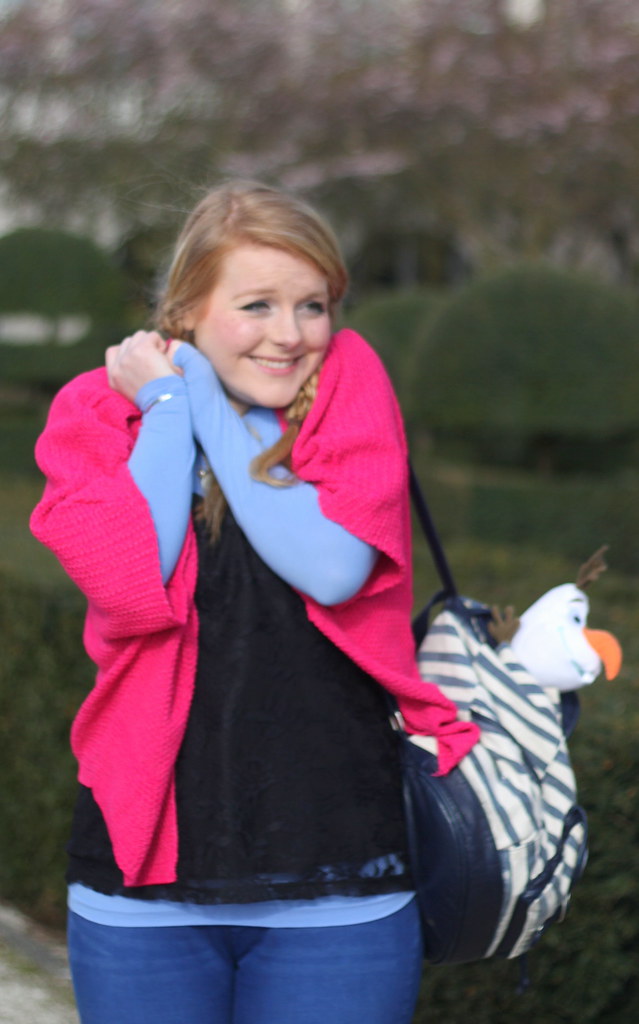 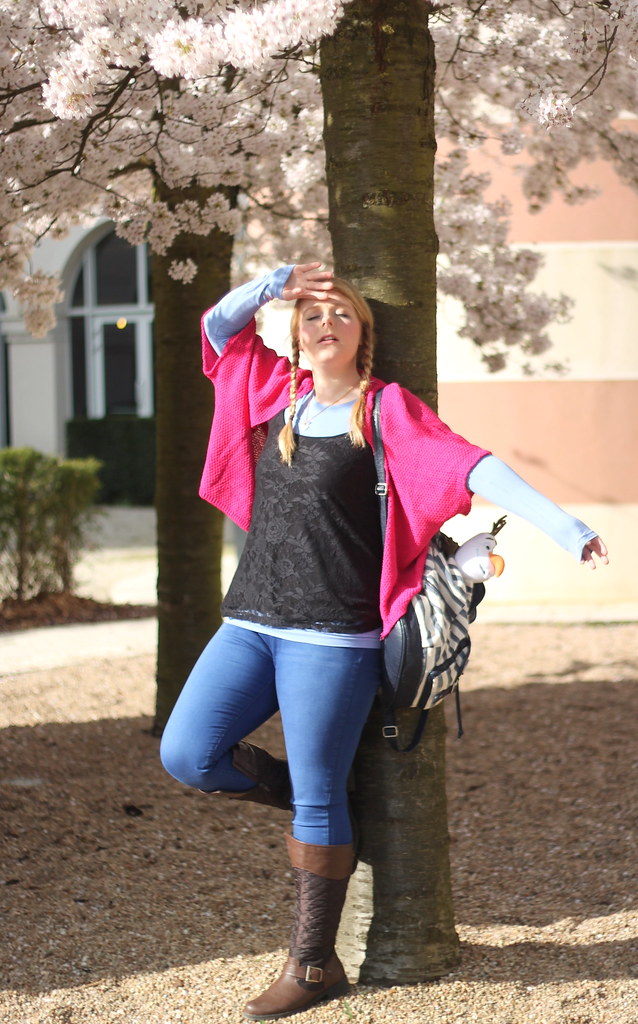 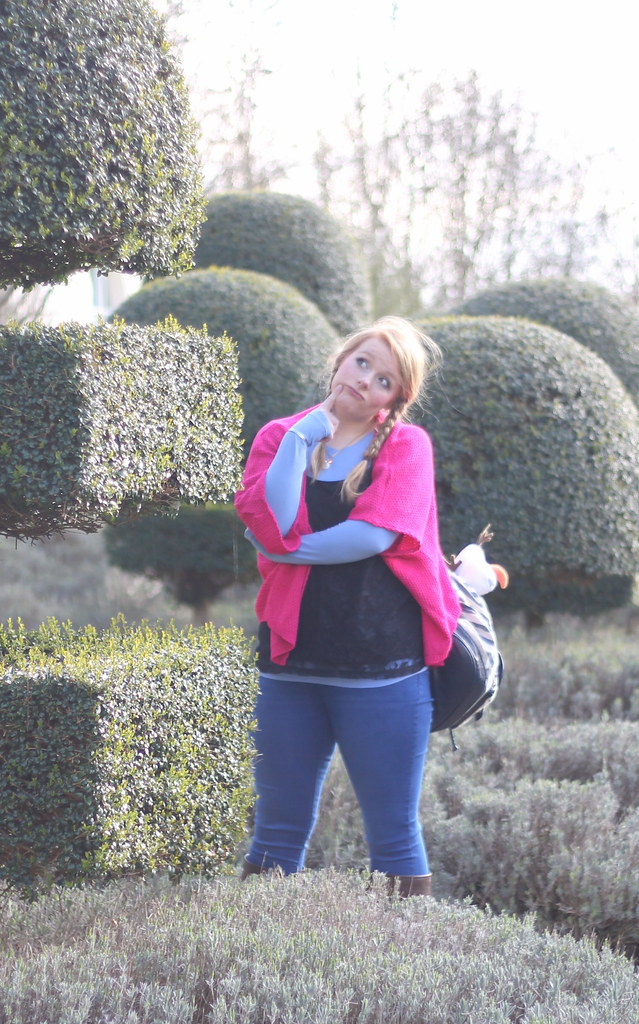 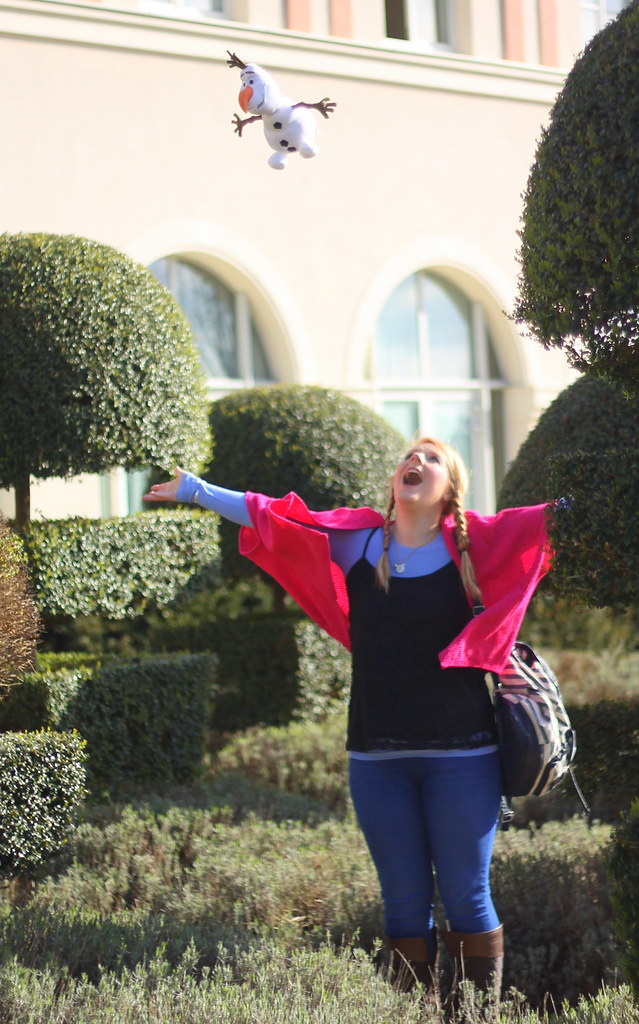 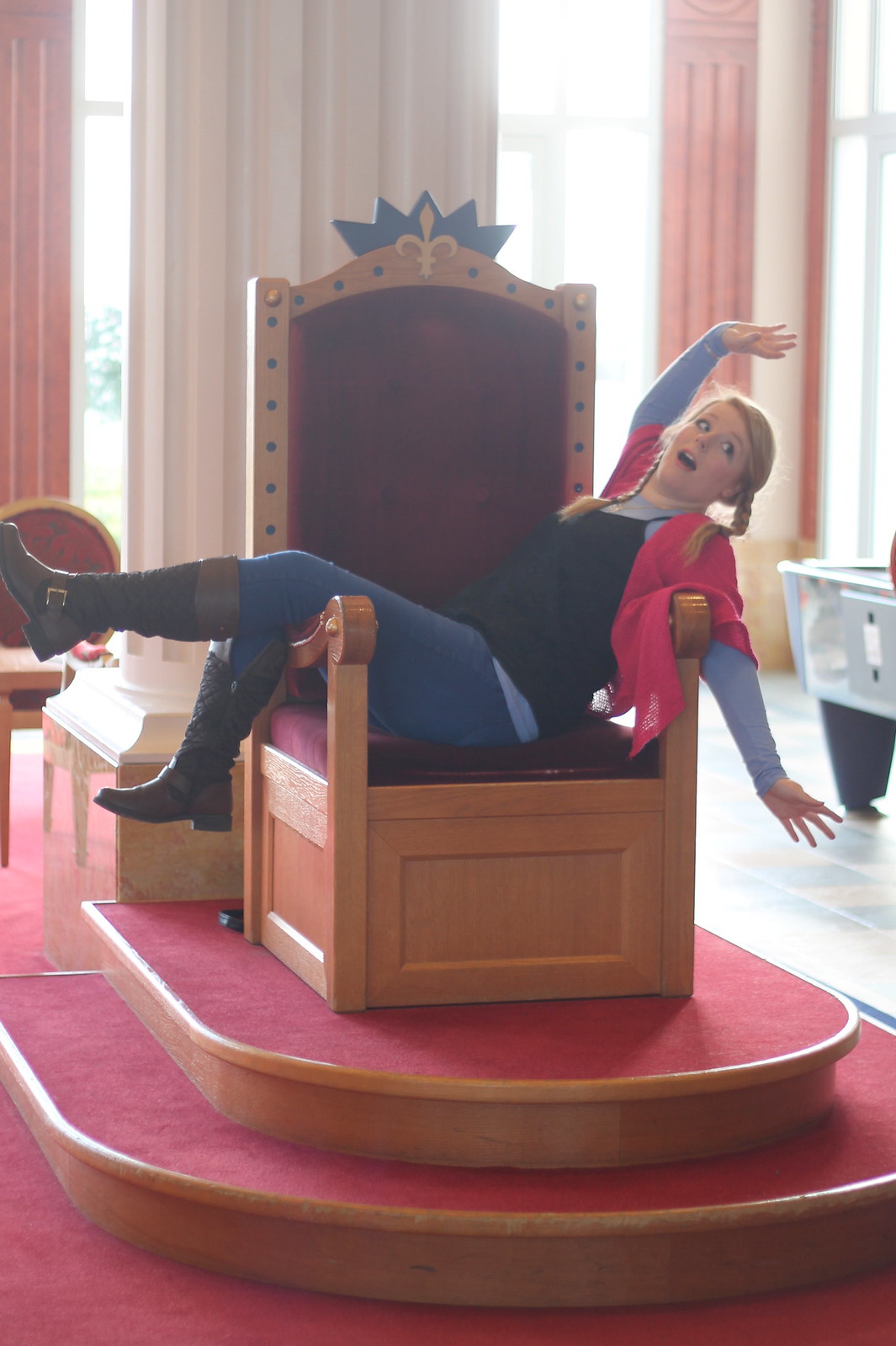 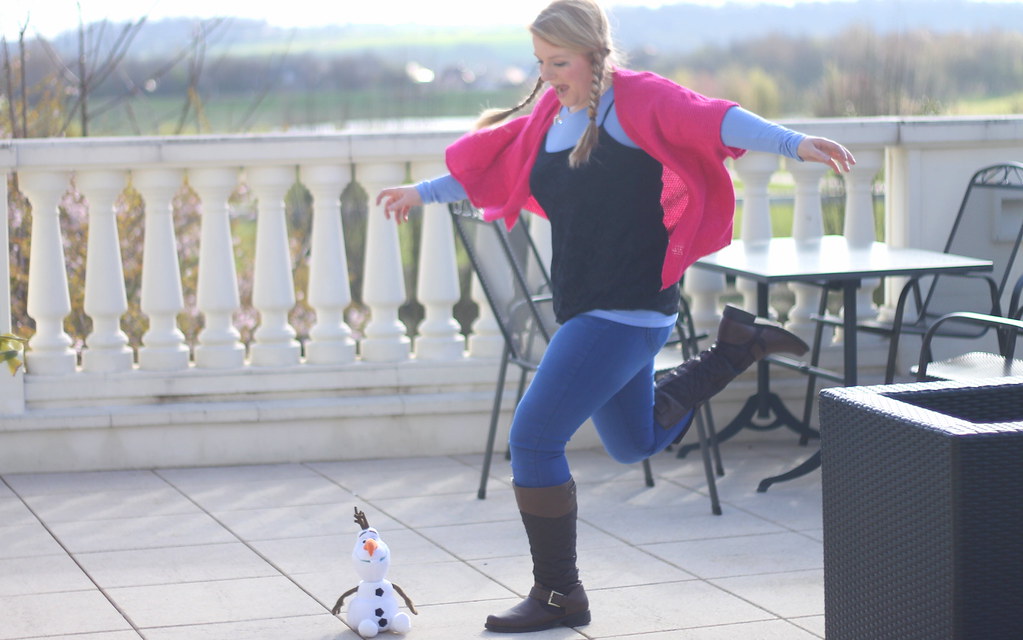 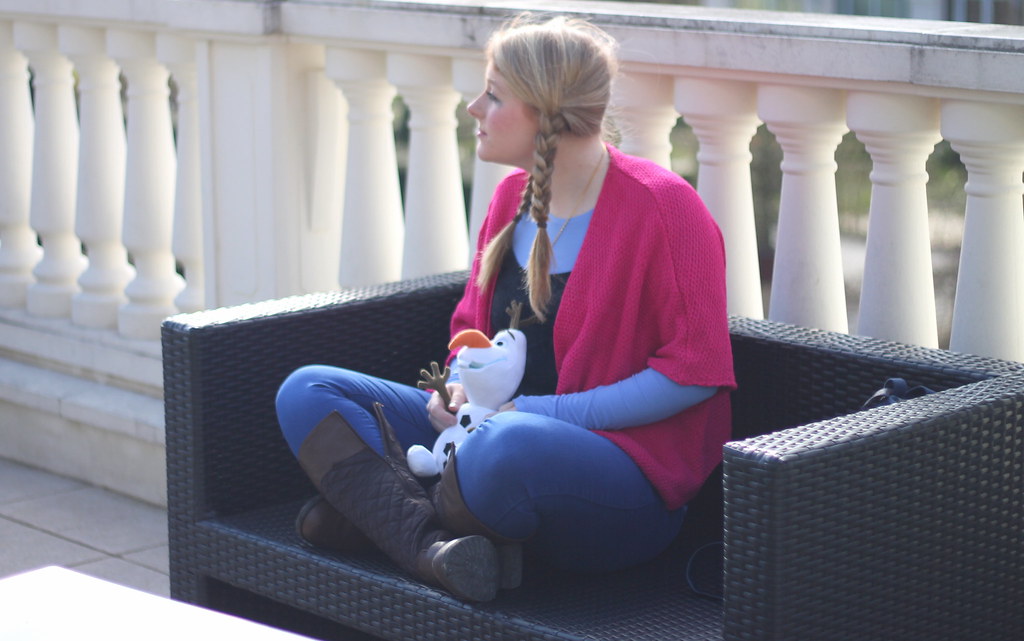 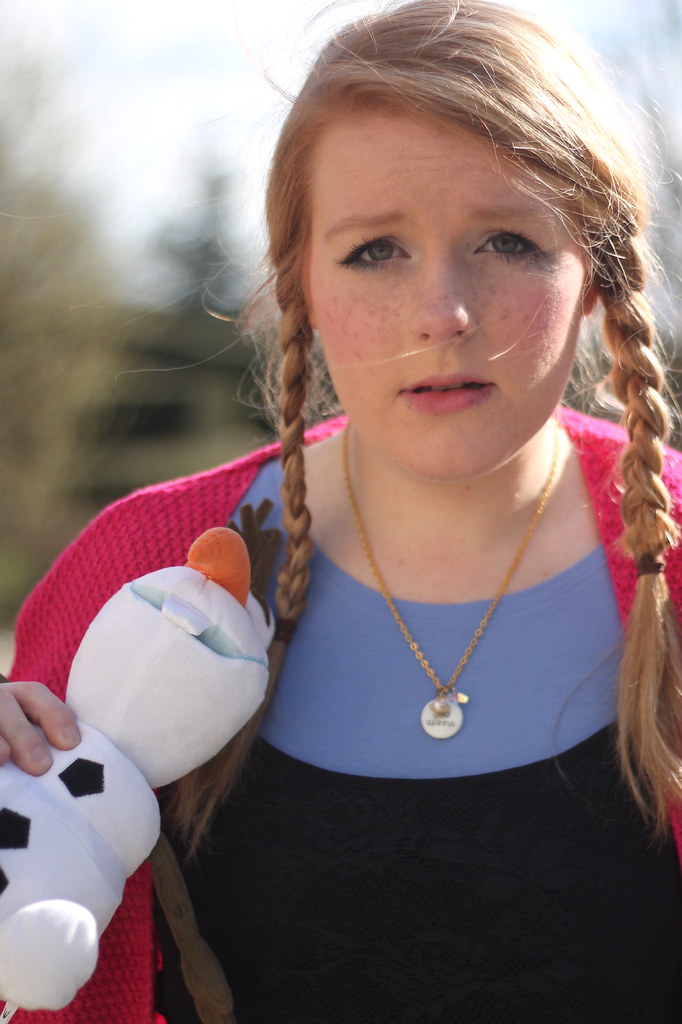 So first up is Beth as Anna. We obviously didn’t go for full on actual costumes with the proper cloaks and full length dresses because we were going to be spending the day in the parks and it just wouldn’t have been practical, and would have been expensive to put together! Beth decided to replace Anna’s blue skirt with blue jeans instead (from Dorothy Perkins) and layered a lacey black vest top (Dorothy Perkins again) over a plain blue long sleeved top (from Gap), with my Tesco boots and finished with a pink cardigan (from Boohoo). We went shopping the week before we went to complete our outfits. She also put her hair into plaits (no colour changing needed!) and did some awesome make up with freckles with a brown eyeliner pencil. I was really impressed by her make up because mine was definitely not up to standard!! She’d also bought an Olaf soft toy the day before that she carried stuck out of her rucksack!
Anna was a lot more fun to pose than Elsa. If you’ve seen the film, you’ll know how crazy she is! I was trying to get Beth to do everything from dancing to “Fetchingly draped against the wall, the picture of sophisticated grace”! I think she pulled it off pretty well actually! There’s also a kicking Olaf pose (watch the film!) thrown in there too, where she, ahem, actually kicked Olaf, much to the small child’s dismay who was watching!! 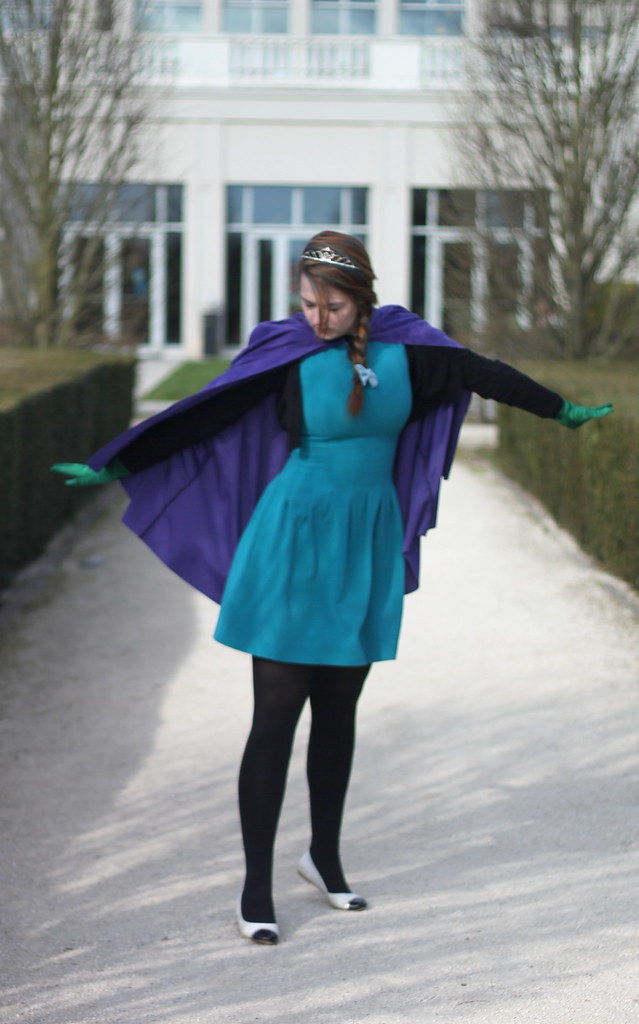 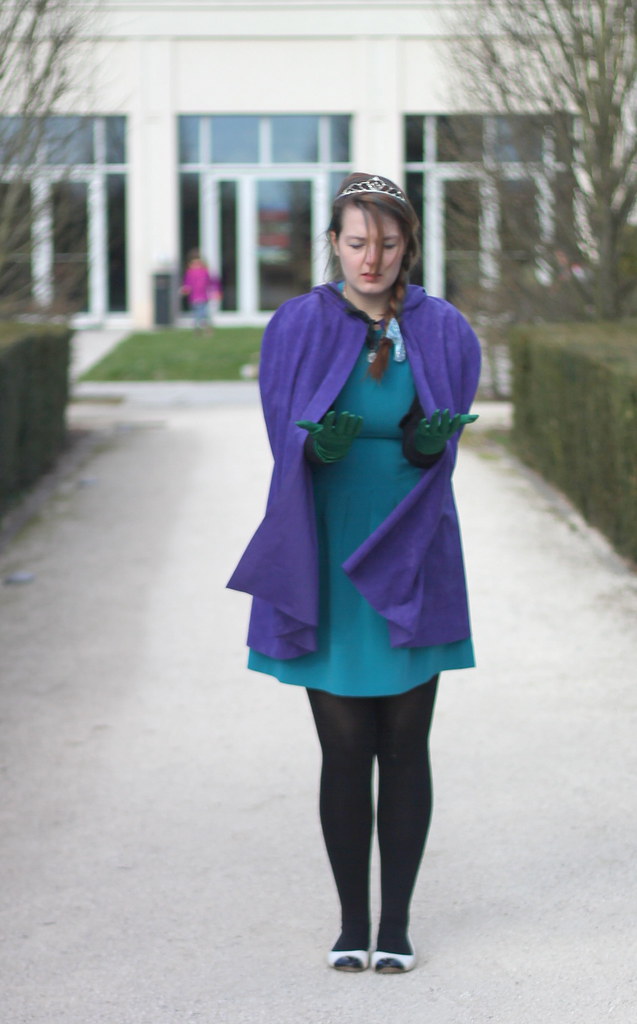 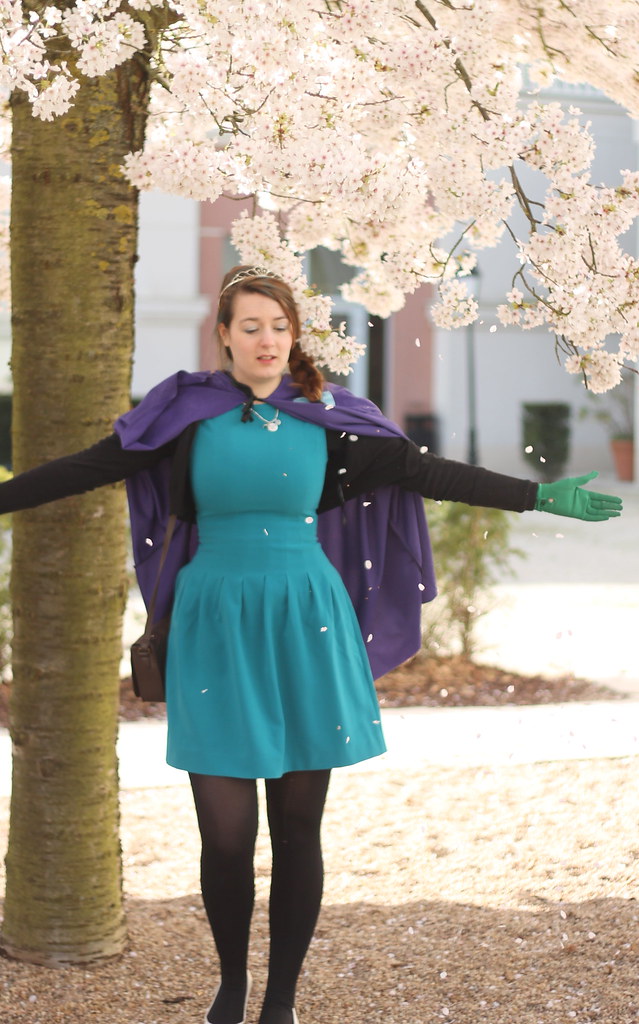 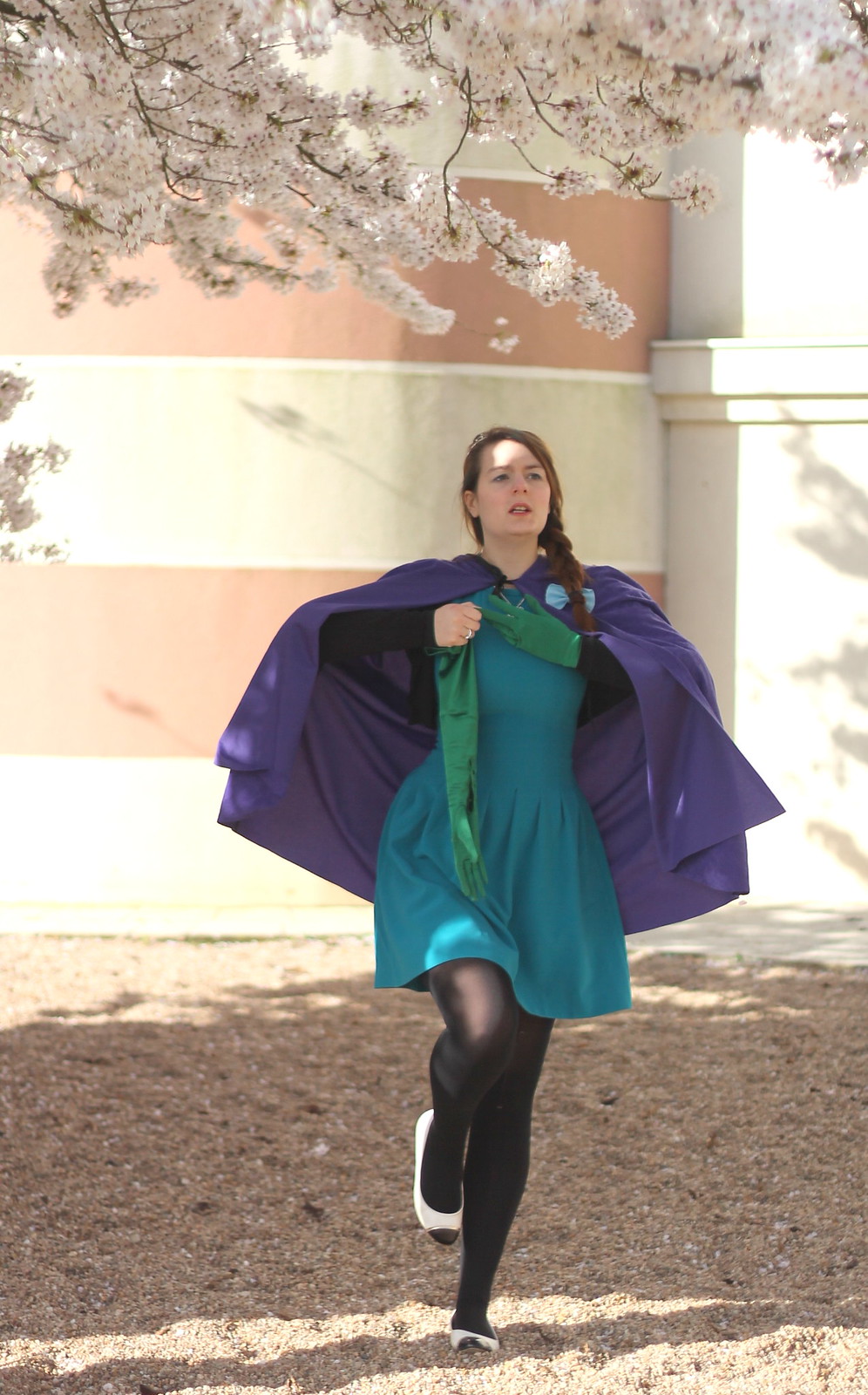 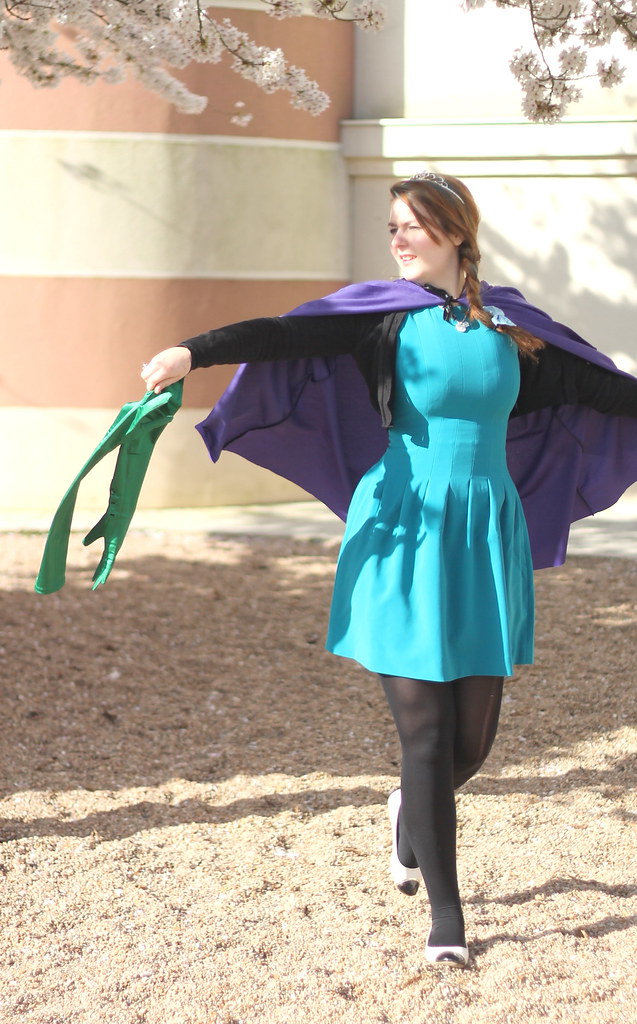 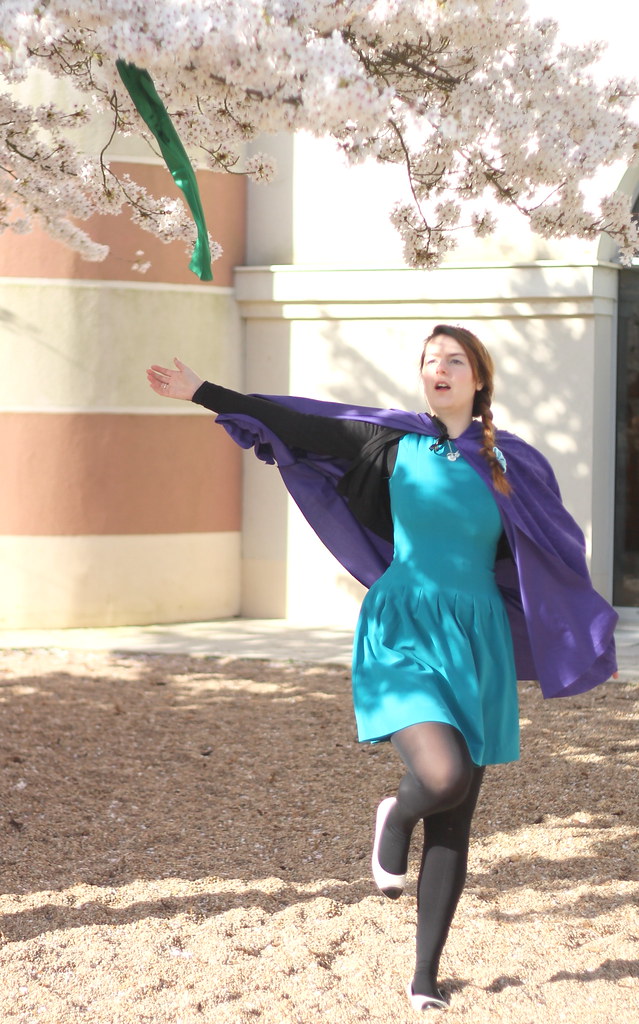 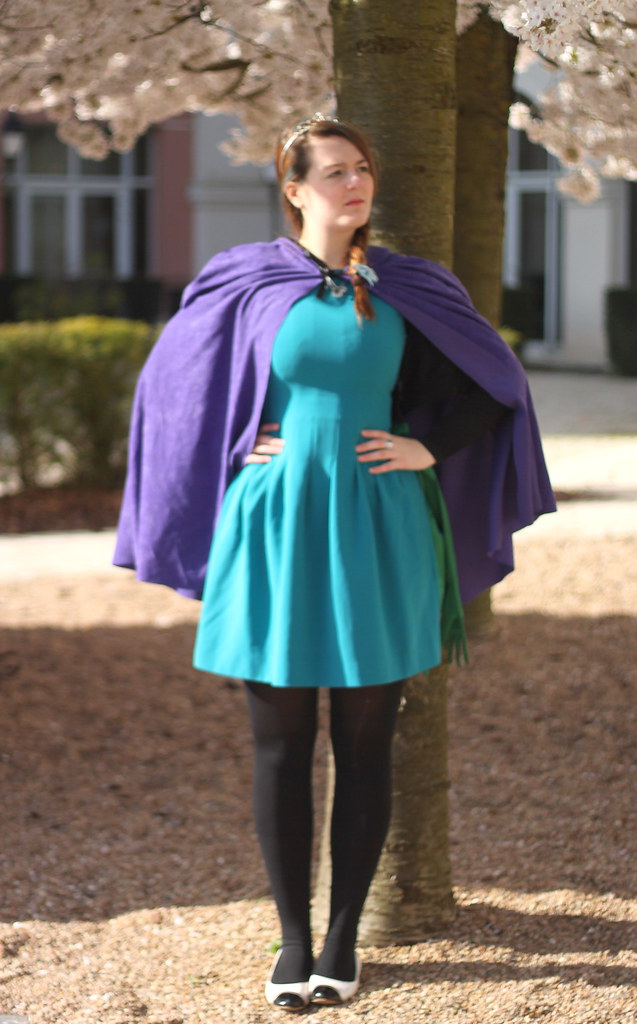 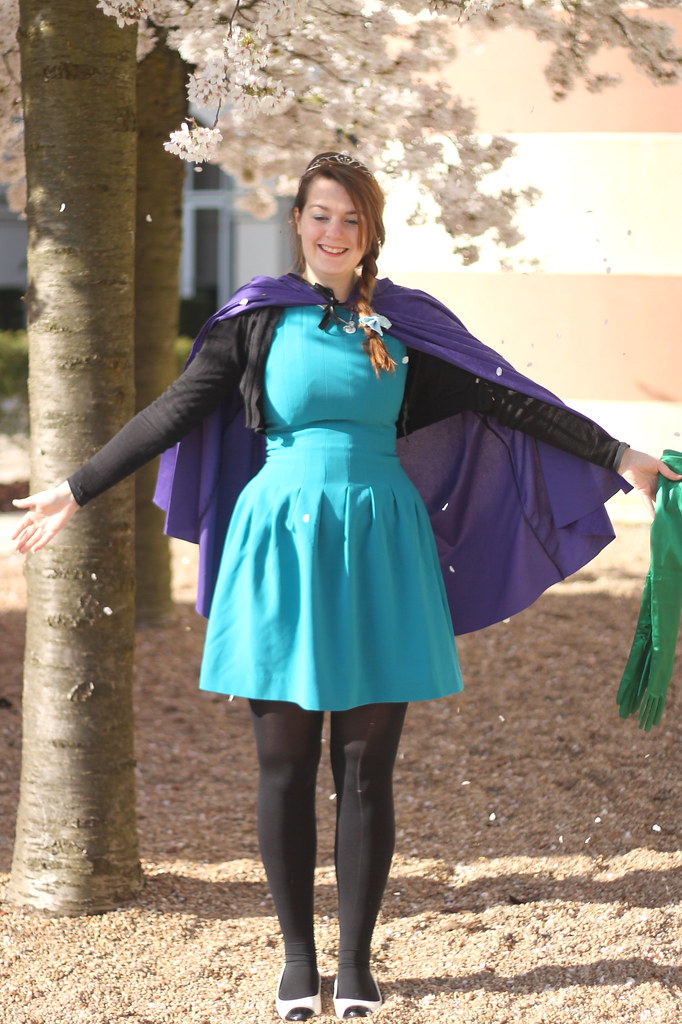 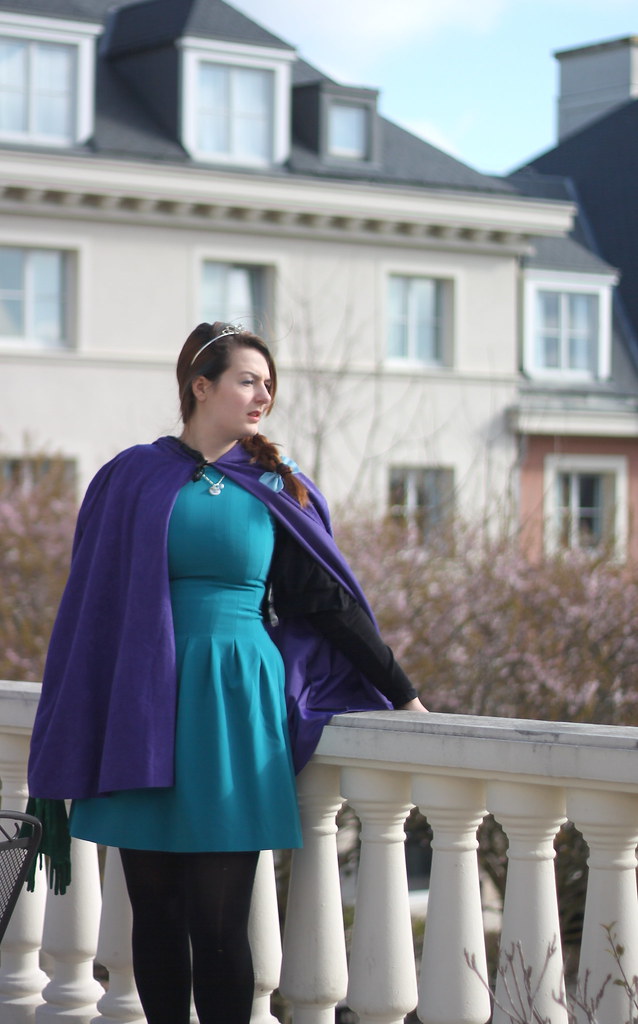 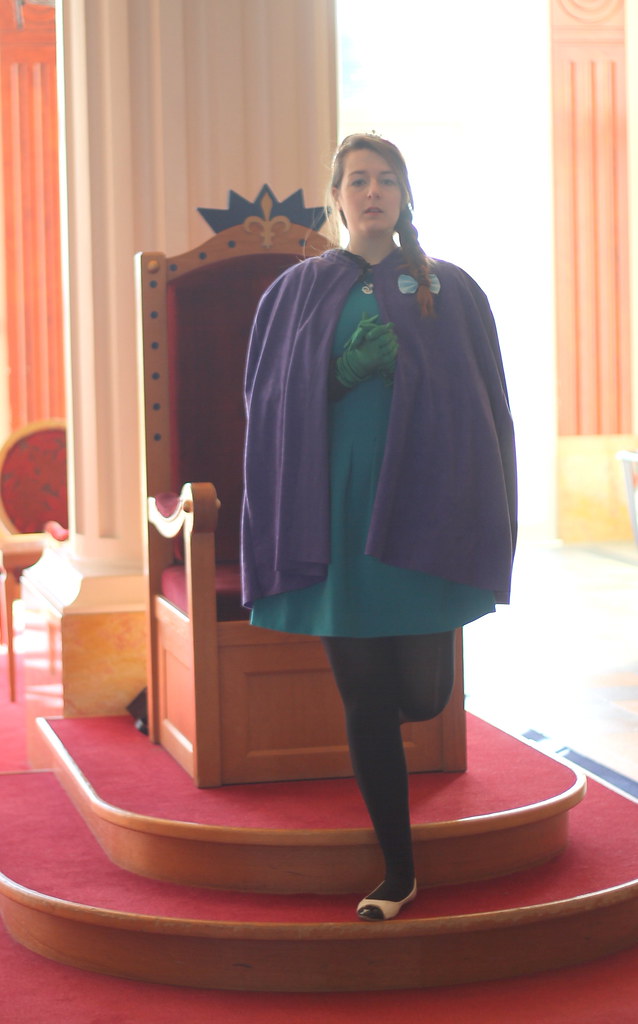 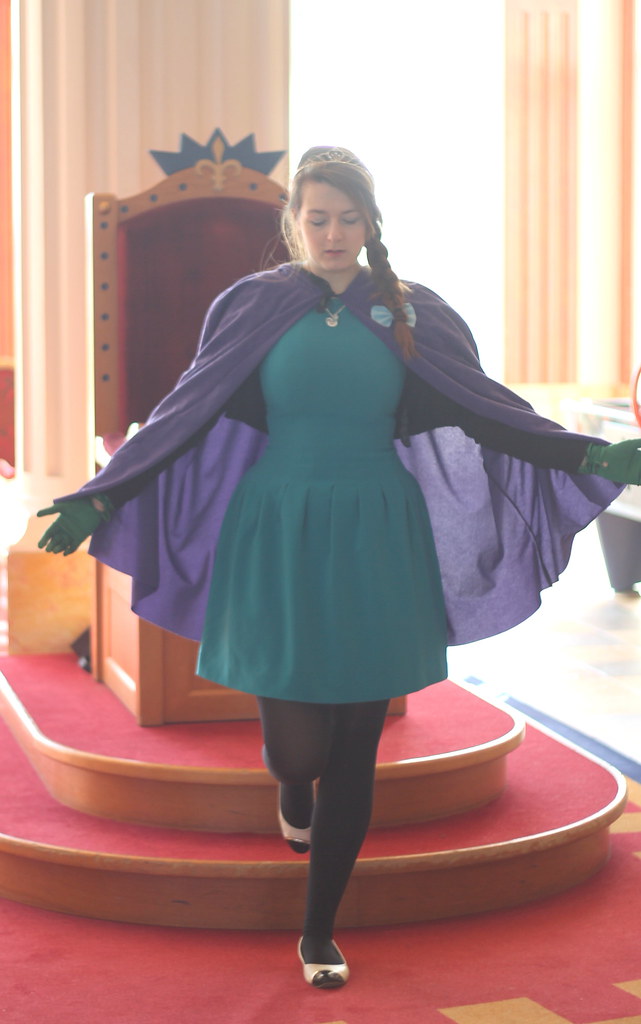 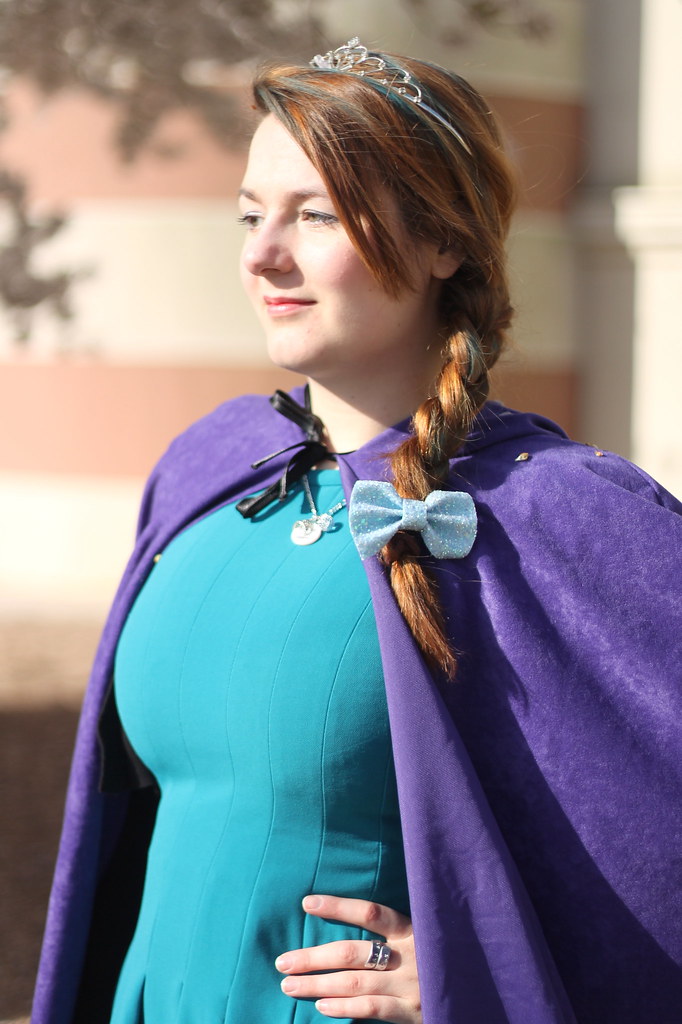 As I said, Elsa was a lot harder to pose! Aside from the tearing the gloves off and throwing them into the wind, and stamping on the ground and throwing my arms around to create a frozen palace, it was difficult to be so “frosty”! We tried to get the blossom to create snow, but not sure it worked that well!
I went for Elsa’s coronation outfit rather than her amazing sparkly blue dress, just because I thought sequins, sleeveless etc. might be a bit impractical for parks all day long and was too hard to find! So, I decided to go for a dress, but not full length because I’d get tangled! I found this one at H&M the week before we went. I then added an old plain black top underneath and a black cropped cardigan on top (because it was chilly!), then found a cape on eBay for only a few pounds, and a pair of (authentic vintage) green silk gloves on eBay too for less than £20 – they go all the way up to the middle of my upper arms and have buttons to fasten them – pretty amazing!
I also added the tiara I bought at Disneyland Paris last time, plaited my hair and streaked it with blue hair chalk from the Body Shop (reviewed here) for a more frozen look since I don’t think my hair would be easy to change to white!! Then I added the sparkly blue bow for fun, and we both wore necklaces that my sister bought as gifts – mine says: “Let it go, can’t hold it back anymore” and Beth’s says: “Do you want to build a snowman?”, and I also got her a bracelet with the same words! I did attempt some blue/white make up, but it didn’t go too well, so it just looks like my usual make up really!
So what do you think of our Frozen outfit interpretations?! Yes, I did wander round in a cape all day, and yes, we did get little girls stopping to look at “The Princesses” – I felt very special!!