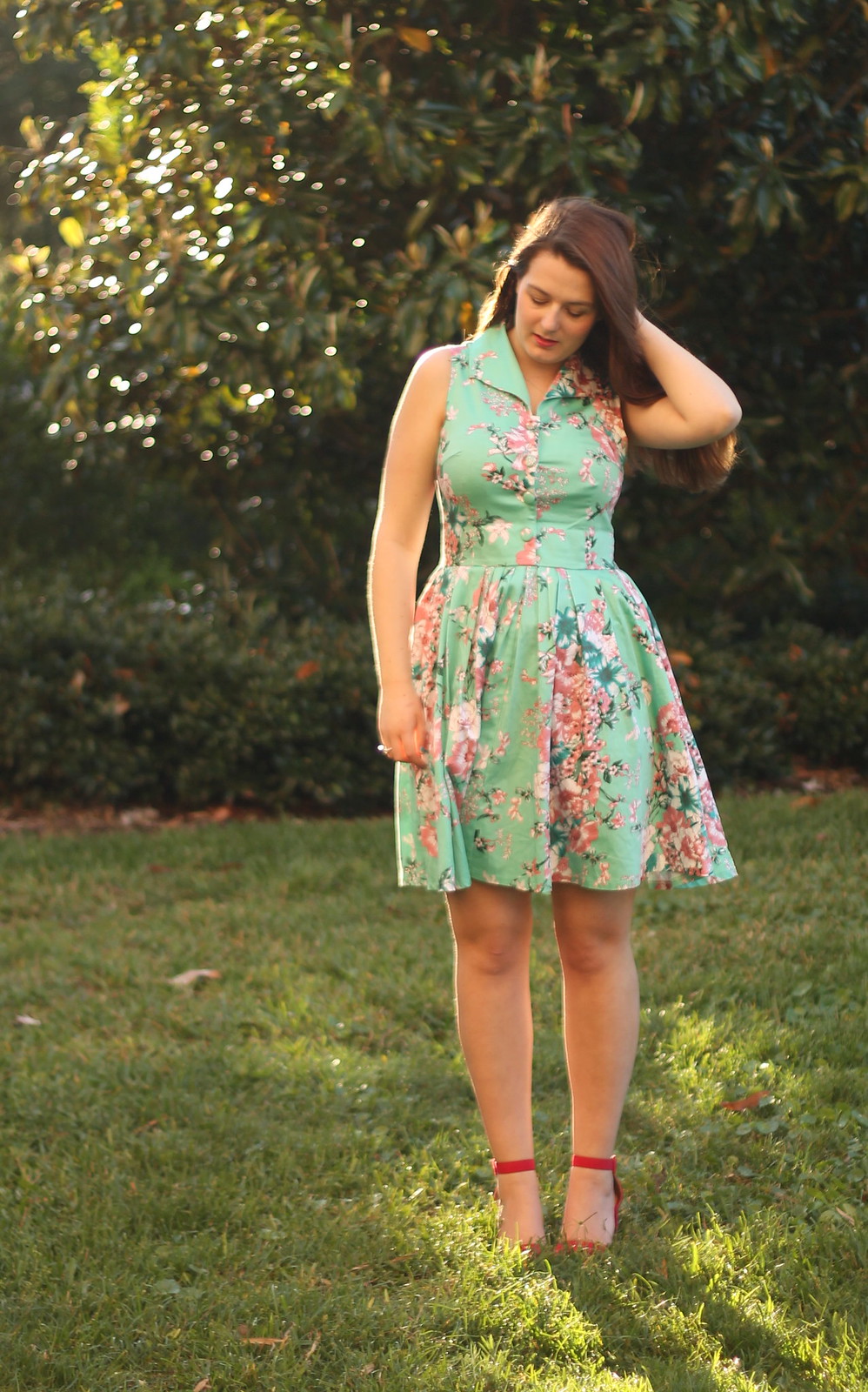 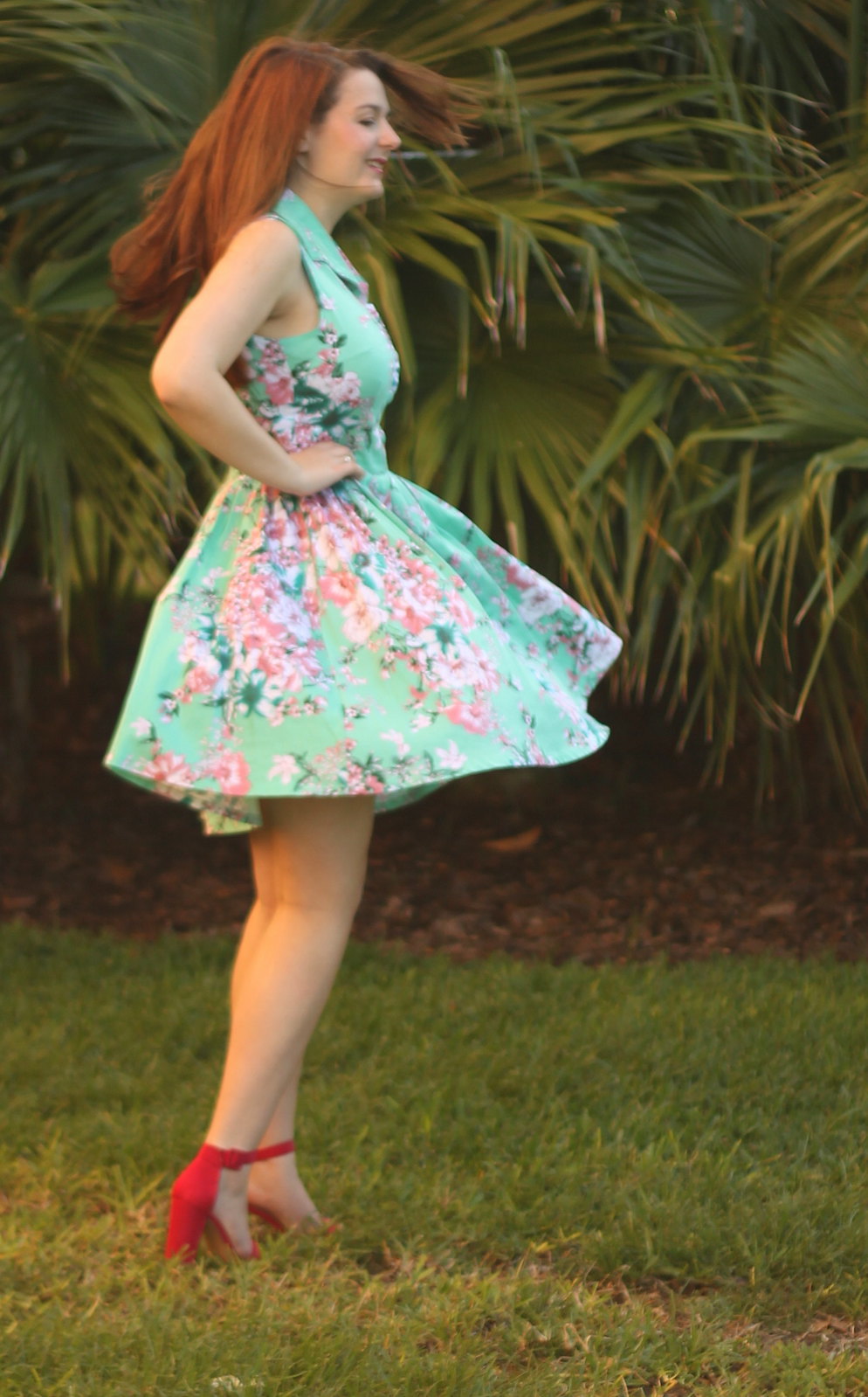 Dress: c/o Voodoo Vixen
Strappy Heels: Primark
I didn’t exactly take many outfit photos in Florida (make that a total of 2, ummm maybe 3, over a fortnight and a half!), but here’s one set of photos I did manage to take! And this evening has quite a story behind it too. When we were travelling down to Manchester where we stayed in an airport hotel the night before travelling, my mum told us to make sure we didn’t eat too much on the Saturday when we were in Florida. This was suspicious – it means they’d planned something. So of course, I spent the next few days begging them to tell us what they had in store for us and trying to figure out what it must be – I went through everything from assuming it must be the infamous Kitchen Sink at Disney’s Beach Club Resort to the Slingshot ride in Orlando (eek!). It got to that evening and my mum gave us a clue, to wear “tropical” clothing. No clue still what we were doing, but considering some sort of beach party (even though we were miles from the beach!), I put on my “tropical” dress (which you last saw here), and we piled into the car. It soon became apparent that we were driving towards Disney (a route we know well!), then we went through the Disney gates….and through the Magic Kingdom gates!! I still hadn’t caught on until we drove through into the Polynesian Resort’s car park – it turned out they’d booked us in at the Ohana restaurant, a Hawaiian themed all-you-can-eat restaurant!
I’d actually stayed at the hotel the first time we went to Florida when I was 6, and I just about remembered it, so it was so exciting to go back. Unfortunately (and this was very unfortunate because it’s very rare that we have a poor experience at Disney!), we didn’t have the best meal due to a grumpy server (come on Disney!) and some not quite up to scratch food. Nevertheless, the food was still yummy and plentiful, including Pineapple-Coconut Bread, Salad, Pork Dumplings, Honey-Coriander Chicken Wings, Pork, Shrimp, and Steak on a Stick, and Banana Bread Pudding with a caramel sauce (so yummy!). 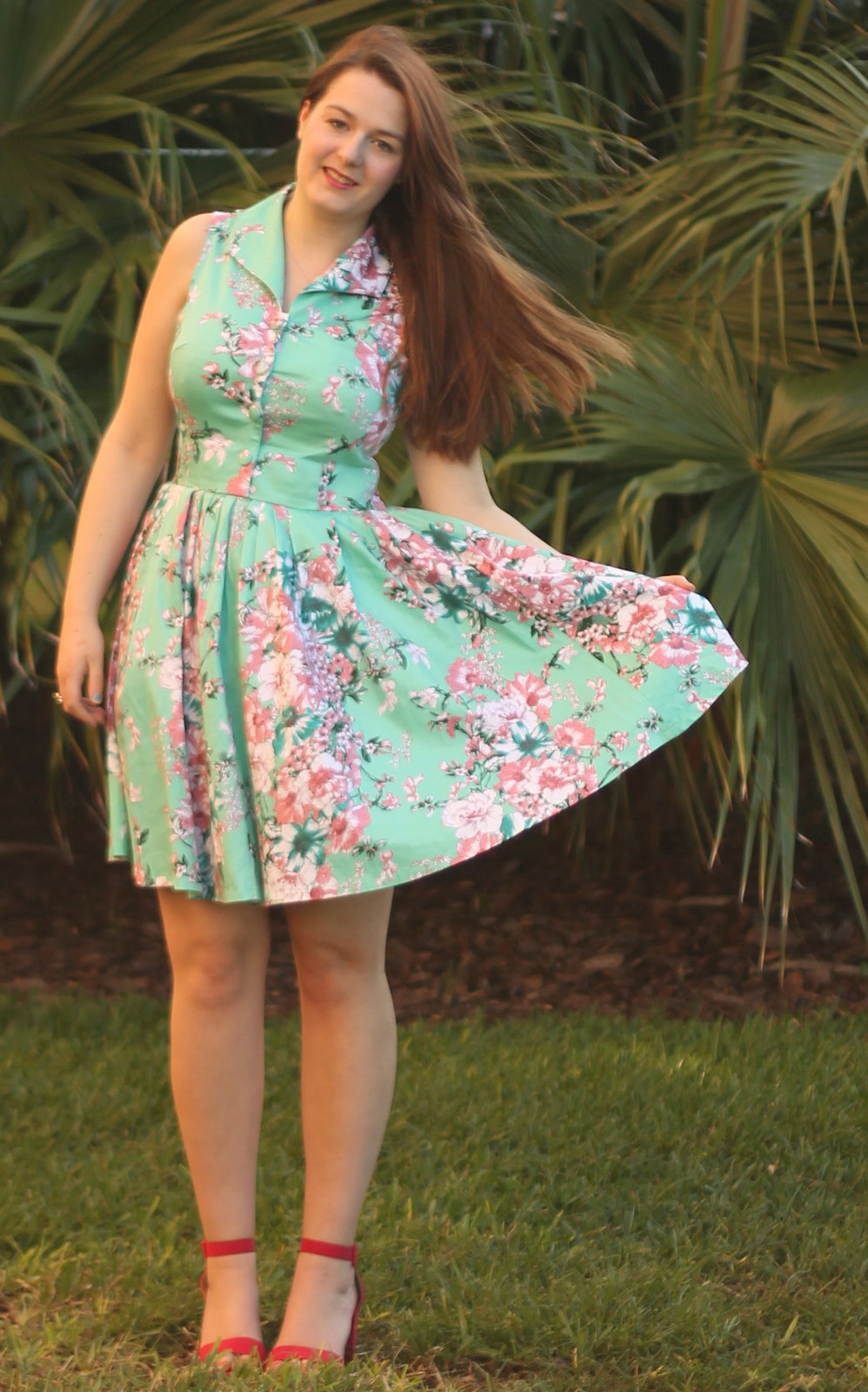 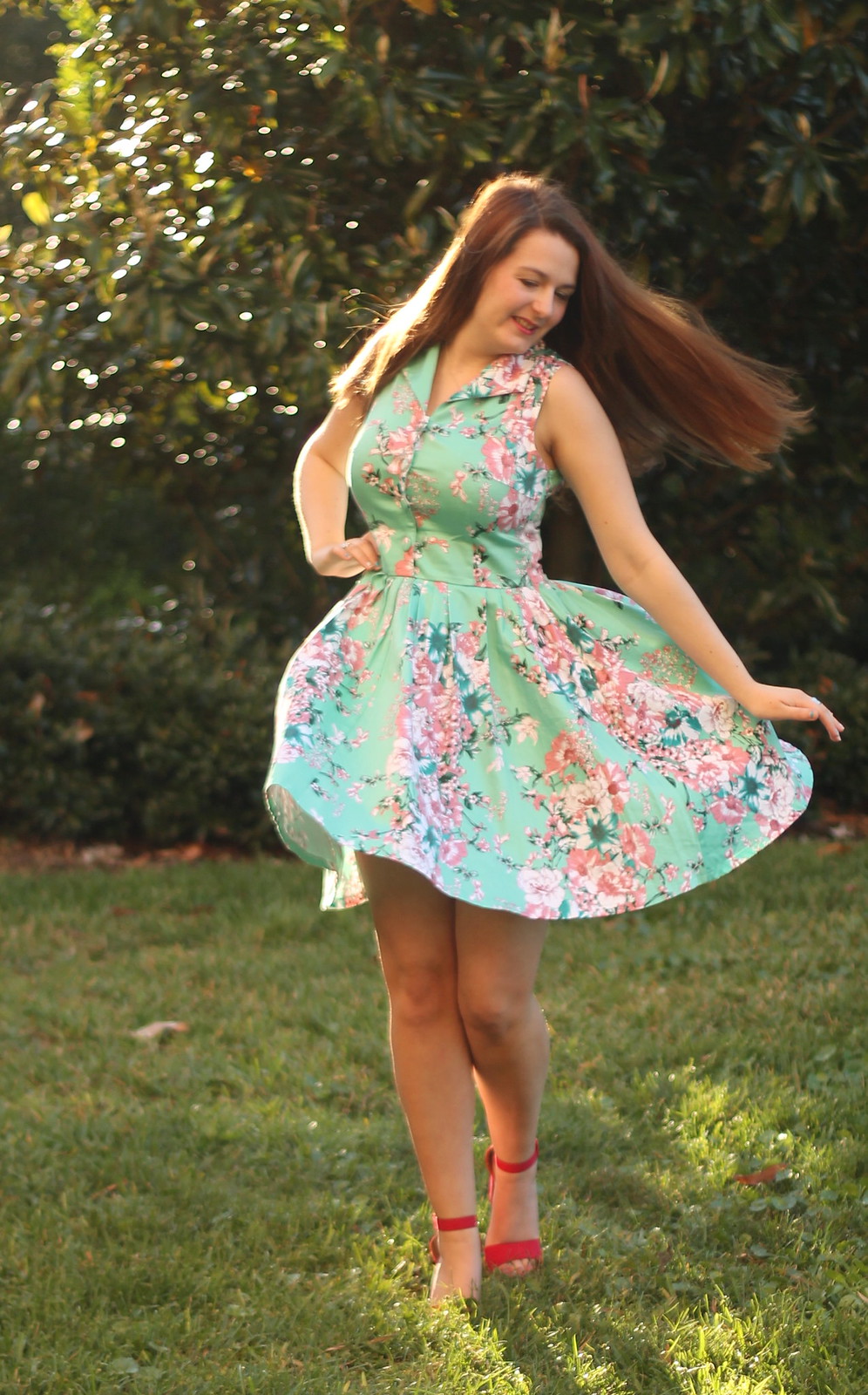 So as I said, my dress was just perfect for the occasion, and I hadn’t even planned it! I bought the heels a couple of weeks before we went to Florida specifically to take them with me, and they were really cute, but had a problem: the metal bit on the buckle (what’s that called?!) kept slipping through on one shoe, so it kept coming undone! I ended up walking through the hotel with one shoe completely undone and looking like some crazy person who couldn’t figure out shoes! They’re still pretty with the outfit though!
After the meal, we went down onto the Polynesian’s beach which is on one of the Disney lakes. We were able to watch the Magic Kingdom fireworks from there, and the music was piped through speakers so we could hear it while watching. It was a little bit weird because we were so far back from the park that there was like a 5 second delay between seeing the firework and hearing the bang! But it was a lovely night for one of our first Disney nights of the holiday (and I’m missing it already!). 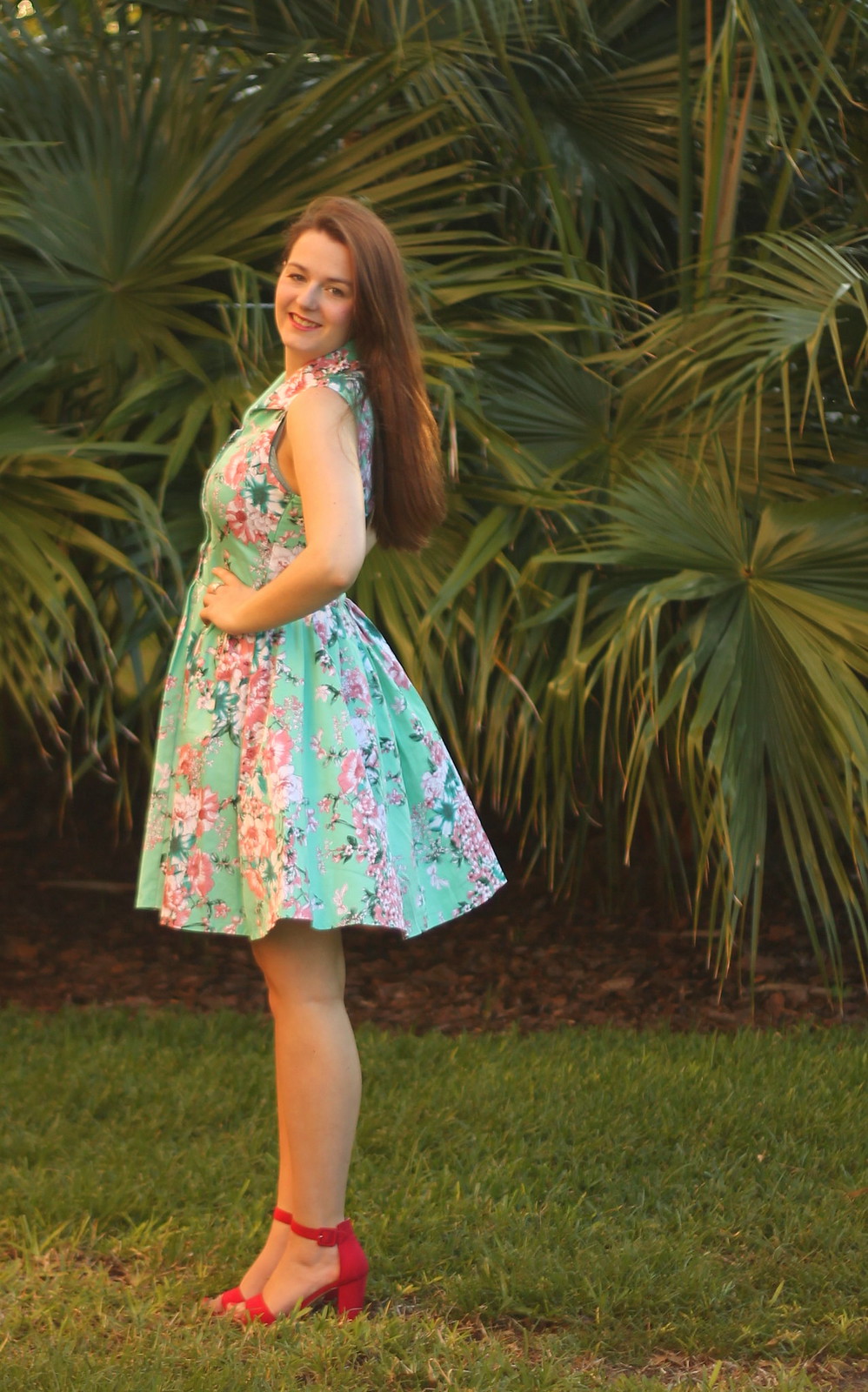 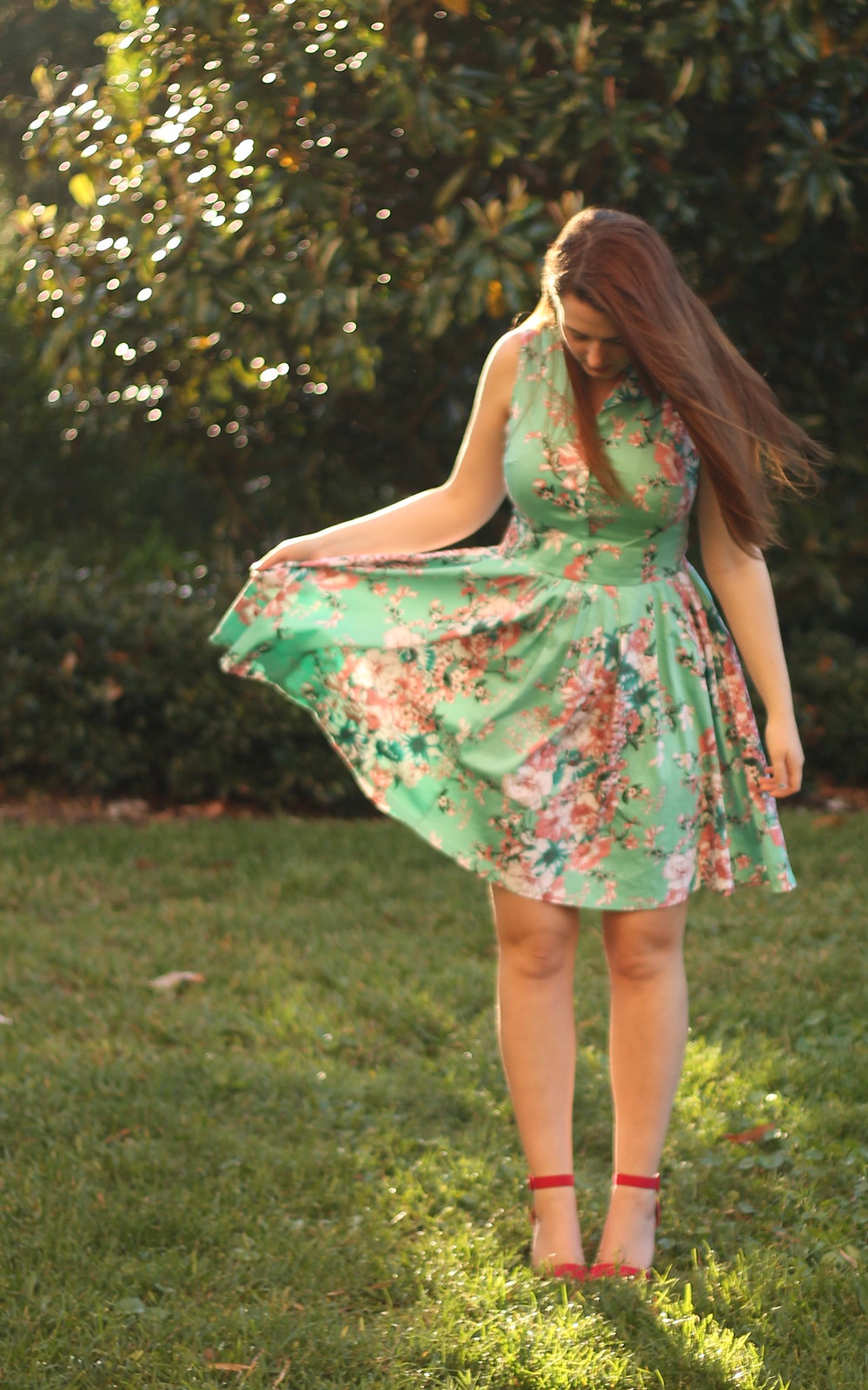