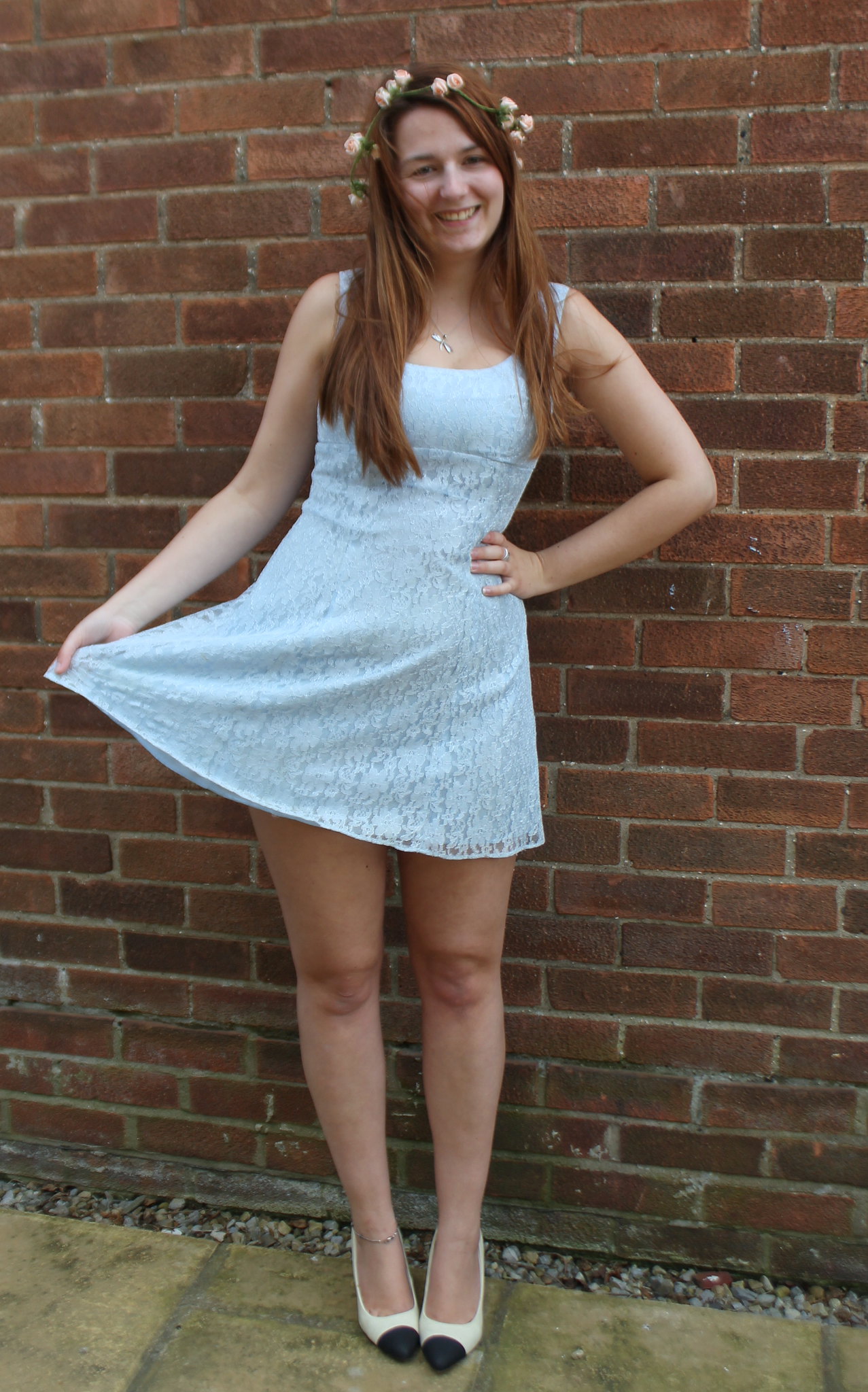 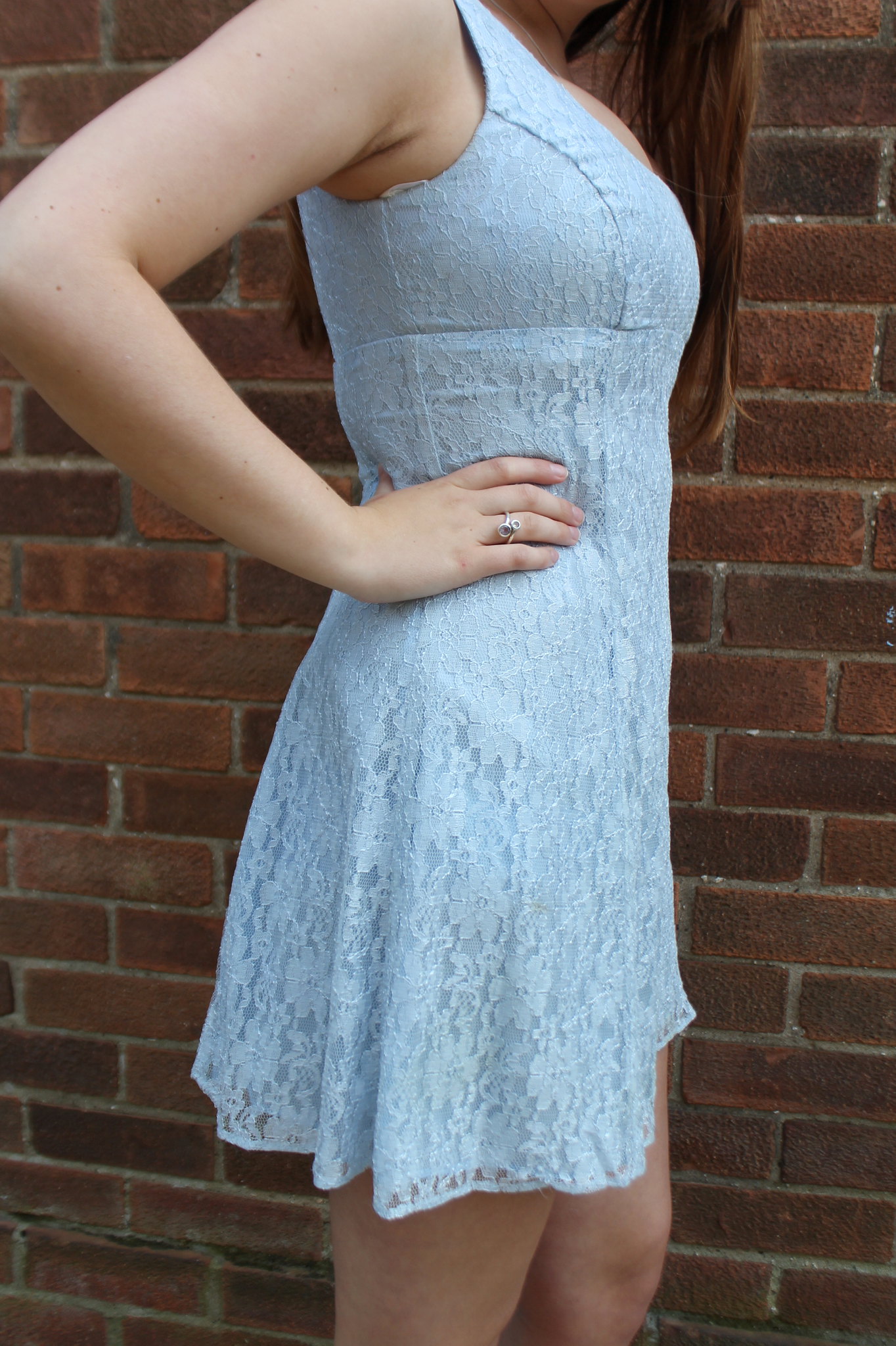 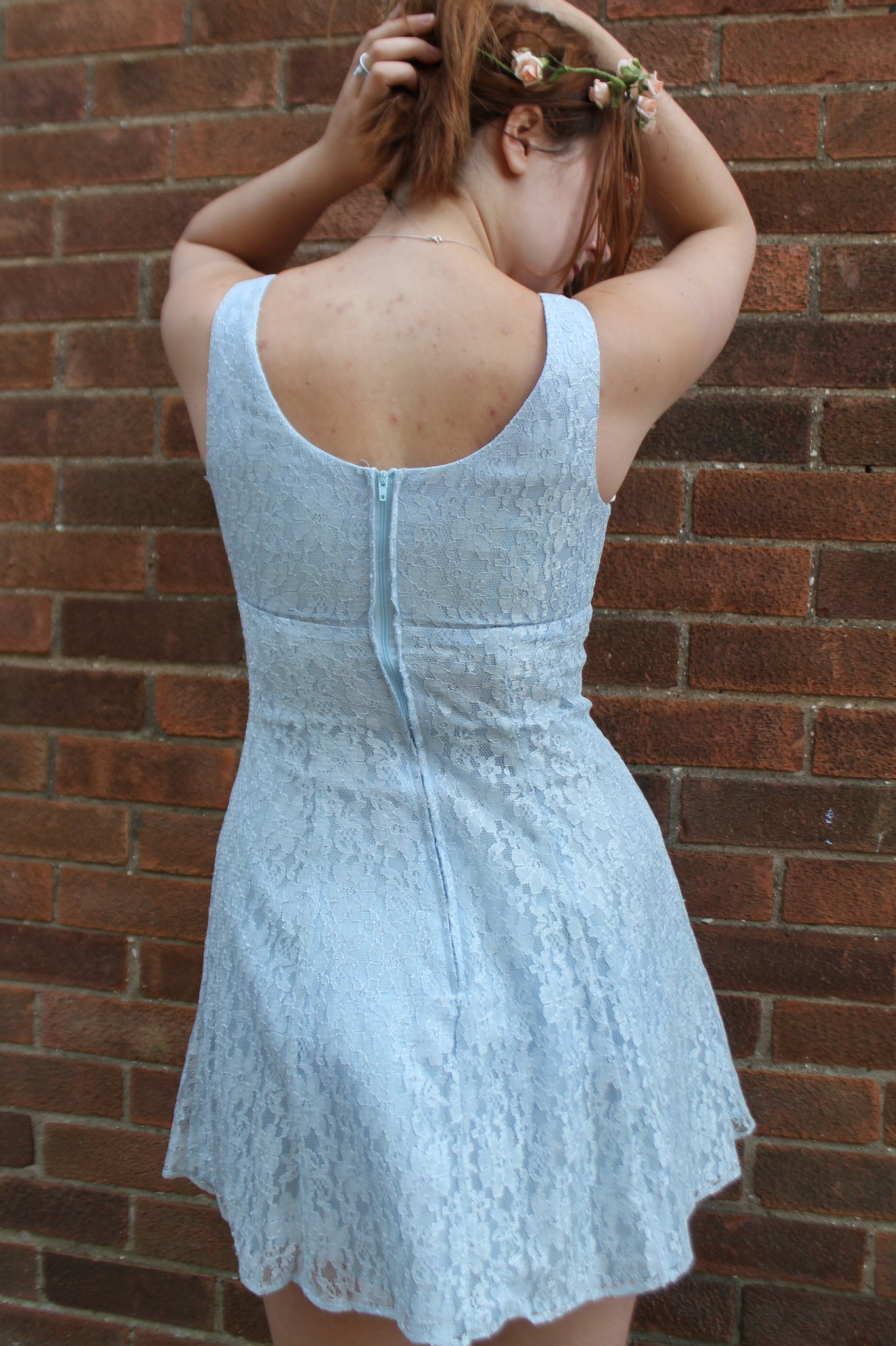 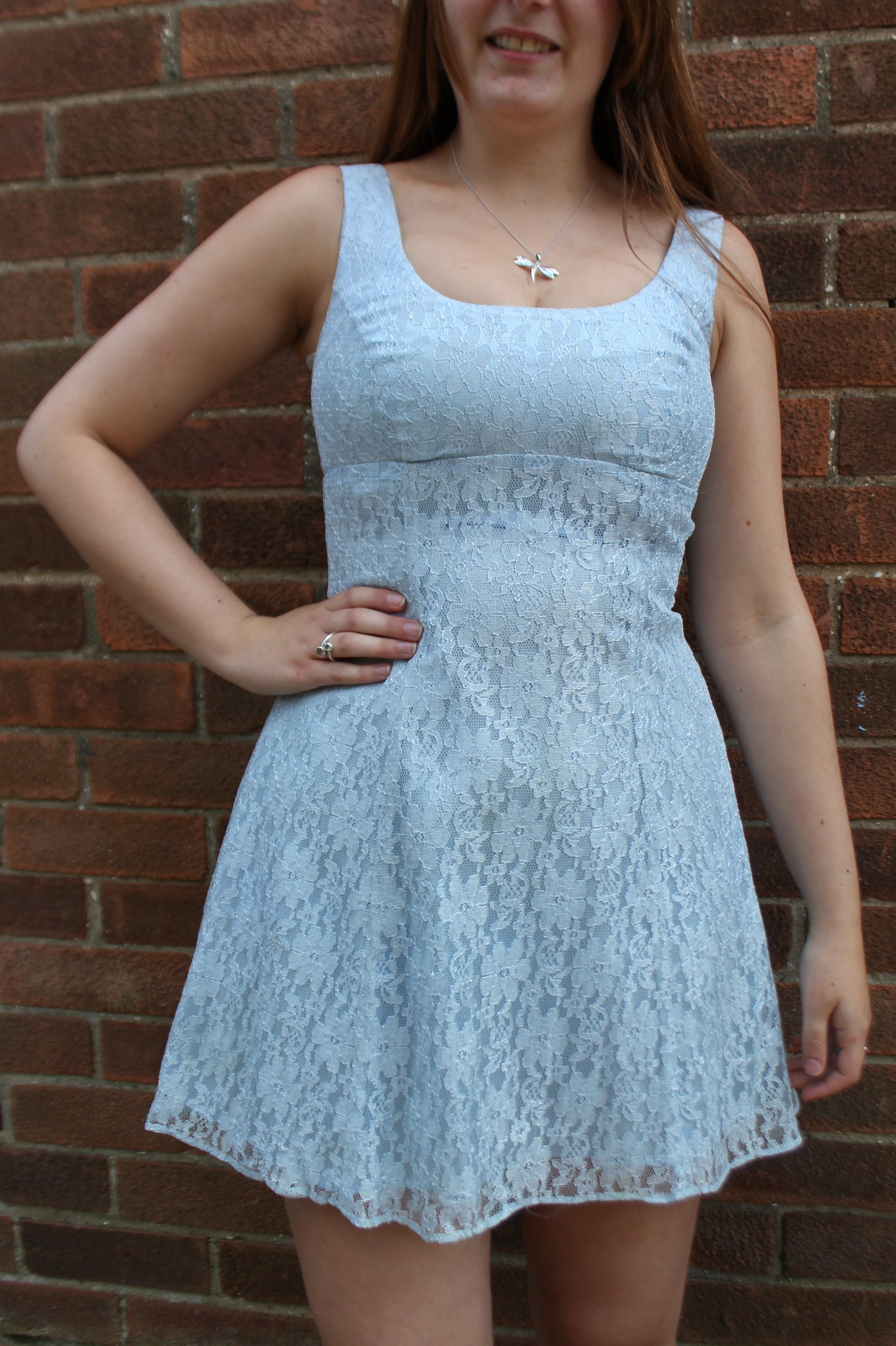 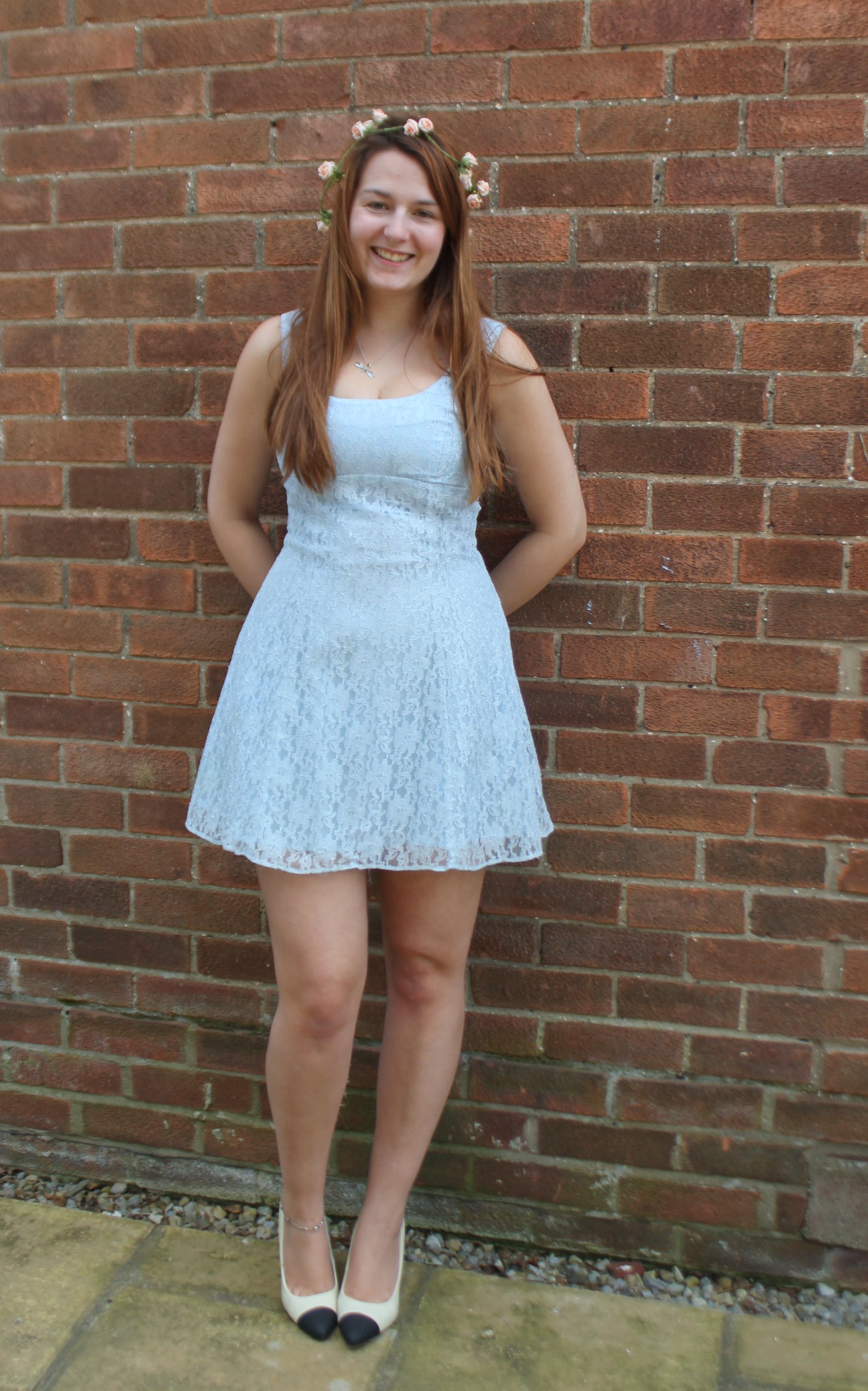 Vintage Dress: Buy here at ASOS Marketplace
Floral Crown: Primark
Heels: Primark
This is another of my items for sale at the ASOS Marketplace, and one I’m very reluctant to part with! I bought this last year from Lauren’s shop and wore it in a blog post here. While I absolutely love it, it’s just that little bit too short for everyday wear, and that little bit too tight in the bust, even though it may not look it, it seems to be very deceptive in that area and makes even my G cups look small!
It seems to be a vintage dress from the 90s, with a very typical babydoll shape with the waist hitting right under the bust. It’s the perfect pastel baby blue for summer, and has gorgeous lace over the top of a lining. As I said, I really don’t want to sell it, but with my overflowing wardrobe (even after it has been almost halved!) and my spending habits, I really do need to. I’ve got it up on ASOS Marketplace here for £18.99 but am accepting offers on it, as I am with almost all the items.
So, life in Sian world at the moment is going well, just going along with everything right now! I did a bit of shopping at the weekend at the York Designer Outlet where the only wearable thing I bought was a pair of M&S mid-heels for £10.50 – I’ve already worn them to work twice and out for a meal, and they’re definitely winners! I also bought a few things at the Body Shop. It’s not somewhere I’d usually go, but it was there so I decided to look, and they had an offer on where I ended up getting 40% off because I’d bought 3 things – pretty awesome! And of course, there’s a Cadbury shop and a Lindt shop…it’s fair to say I got a bit carried away and ended up with 10 Creme Eggs for £2, a huge bag of misshapes for £3.65 and a whoooole box (like a big, big box) of Pick ‘n’ Mix Lindors for £11! And I haven’t even eaten them all yet, so I’m pretty impressed. On Sunday Ben and I went down to York again, just to pick up a few things, and I ended up buying some hair rollers in Argos. I’ve wanted some for a while and decided to get some then – they’re the Babyliss Thermo-Ceramic hair rollers and only cost like £25. I’ve tried them out twice and they seem really good – you get really big bouncy hair with little effort. I’ll definitely do a review sometime, but only once I’ve got the hang of it because I’m kind of making it up right now.
I’ve also had choir again this week with Fran, practising for our concert in a couple of weeks. This one is going to be taking place in the Abbey at my old school which will be really weird, but I’m definitely looking forward to it. We’re singing Haydn’s Creation which I am positive we’ve done before, but this is really confusing me. Fran and I had missed a couple of rehearsals because of work and colds (booo), so in this rehearsal, we started right at the end of the book, and we didn’t know the songs. Fair enough, we thought, we must have it confused with something else. Until the end of the rehearsal, when we turned back to the front of the book to practice one of those, and I knew it well enough to sing without the music in front of me…I flicked a few pages and discovered I knew not only that one, but every other song until the few at the end. What on earth is going on?! If we’d have sung it at school, surely we would have done the whole thing?! And we knew the ones at the beginning so well too – I’m sure we’d remember if we didn’t do the second half or something – weird. Anyway, it makes it easier since we’ve missed rehearsals and the concert’s only a couple of weeks away!