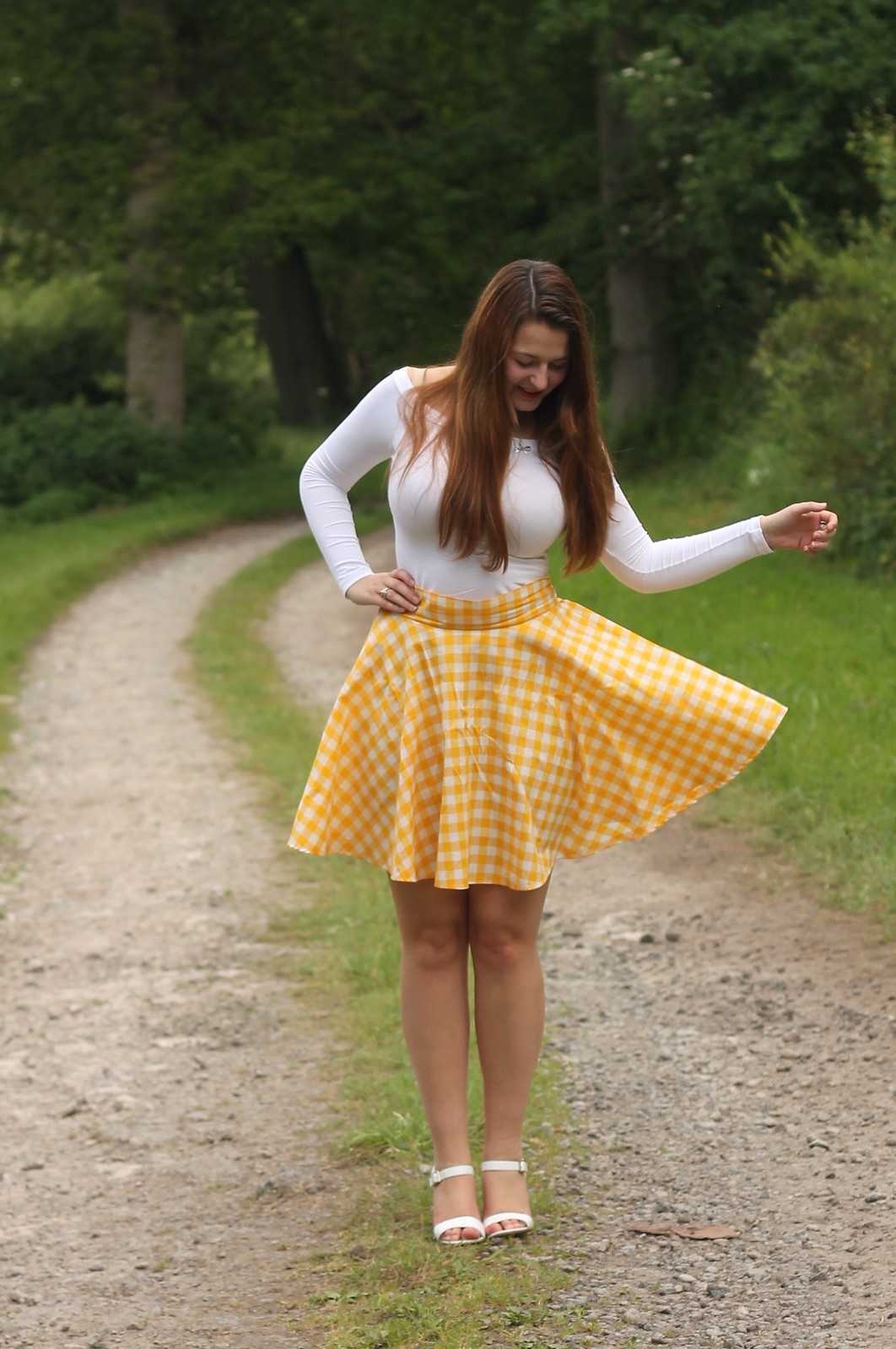 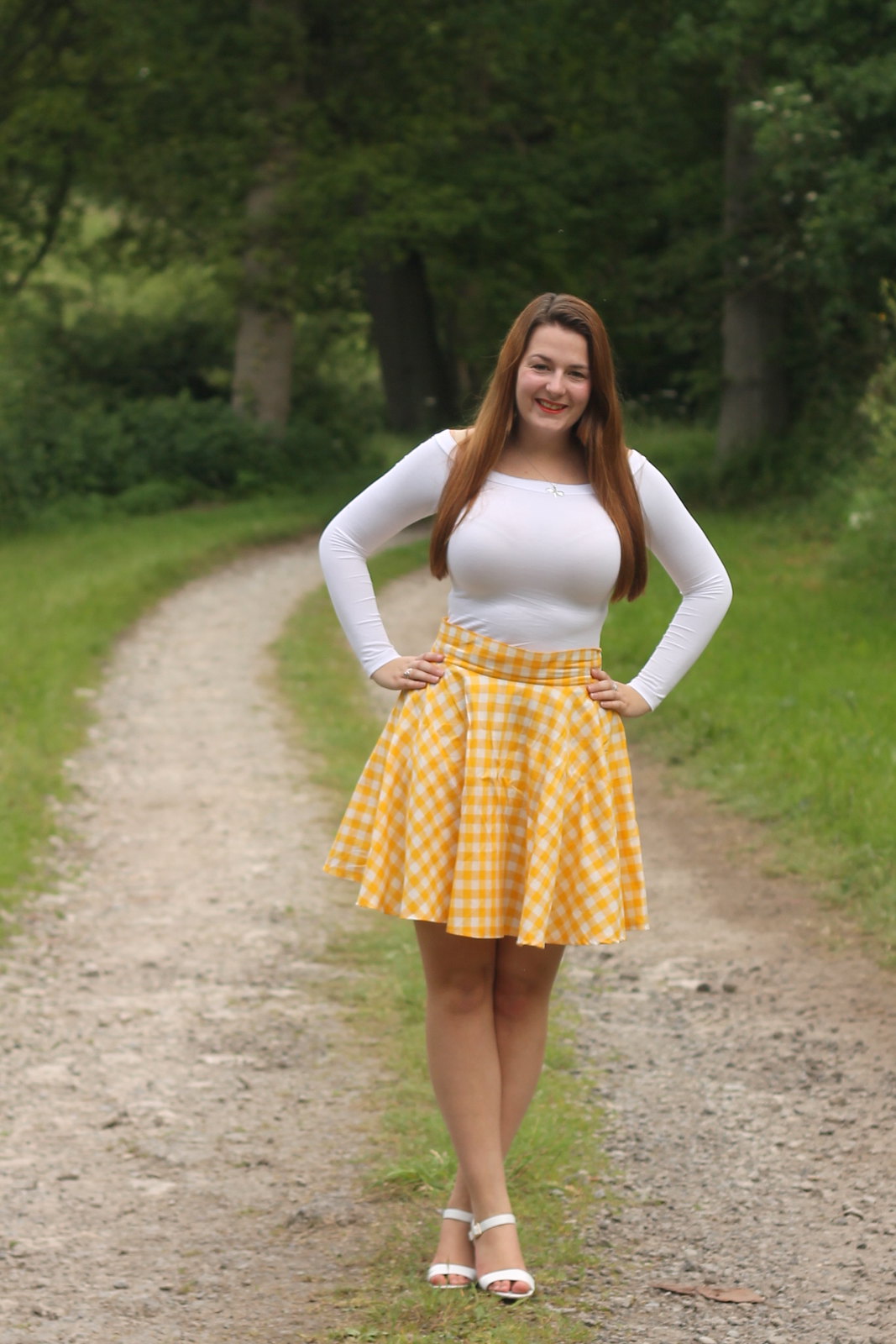 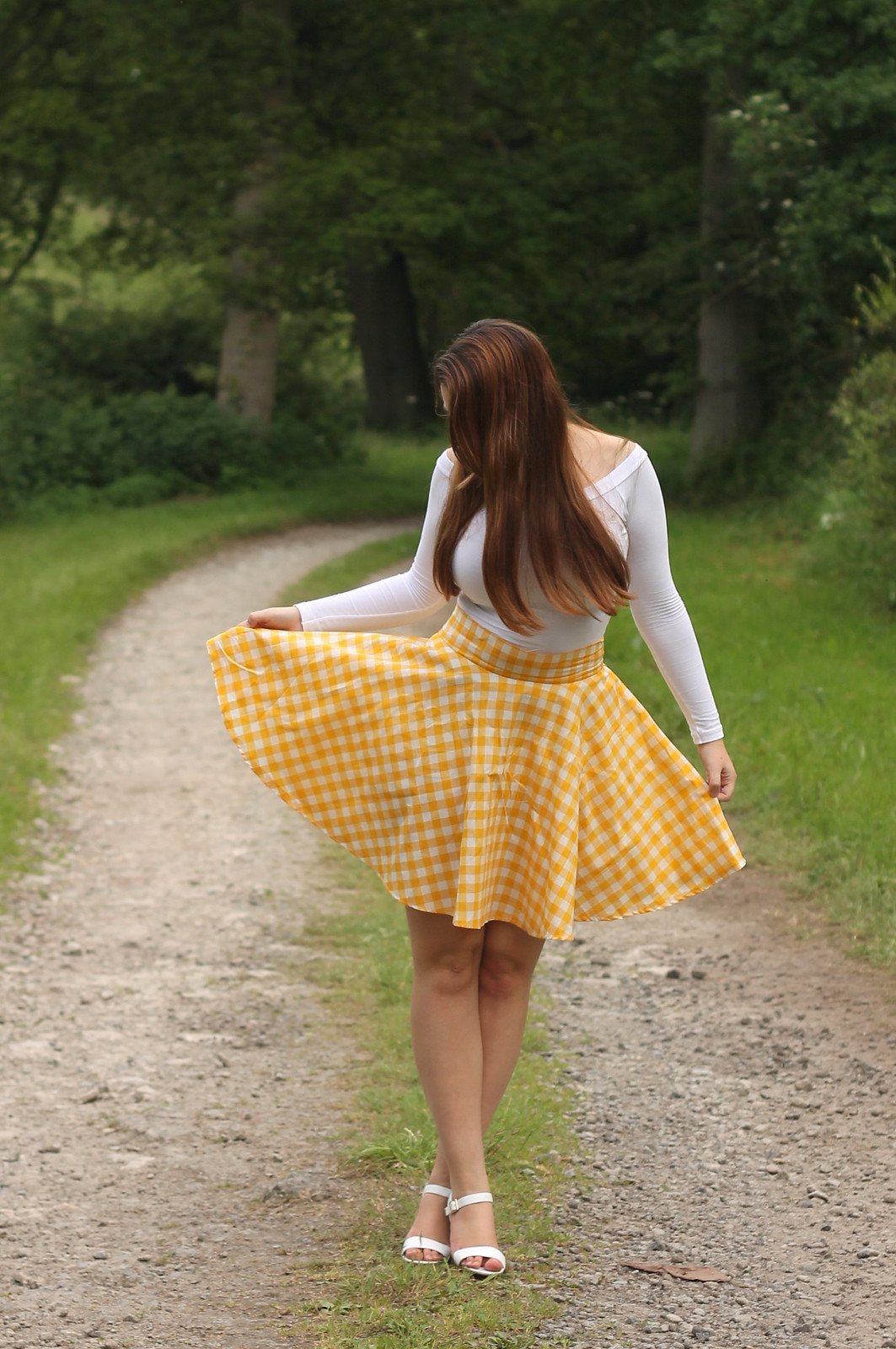 I think you probably won’t be surprised by this post, considering I’ve been alluding (or just shouting about!) my new circle skirt making talent (not that great of a talent, but it’s still something!) for my last few posts, and you saw a sneak peek of one here. And finally, I’m here with an outfit post of my first one, and actually my favourite so far. This was my first attempt at making a circle skirt, which is actually a much easier process than I thought, but it also included adding a zip which I hadn’t yet attempted (spoiler: it wasn’t as bad as I thought at all). The sizing is slightly off, being a tiny bit big in the top of the waistband because I overmeasured my waist measurement, but I sorted that out in my next attempt by bringing in the top of the waistband around the zip, so that one fits perfectly, but I still prefer this one anyway!
The fabric came from an old friend of my mum’s who has recently moved into a home. When clearing out her house for her, they came across a small stash of fabric, some of which has been partially used, and some never used. It could be decades old, so I’m calling it my “vintage fabric stash” even though I’m technically not sure how old it is. The handwritten price labels and super cheap prices for large pieces of fabric do suggest that’s it’s pretty old though! This gingham was absolutely perfect for this project though and worked really well considering gingham is apparently right on trend at the moment, although I’ve always been partial to a bit of gingham, even insisting on my parents buying me a gingham school dress when I was little despite my school not having gingham school uniform! 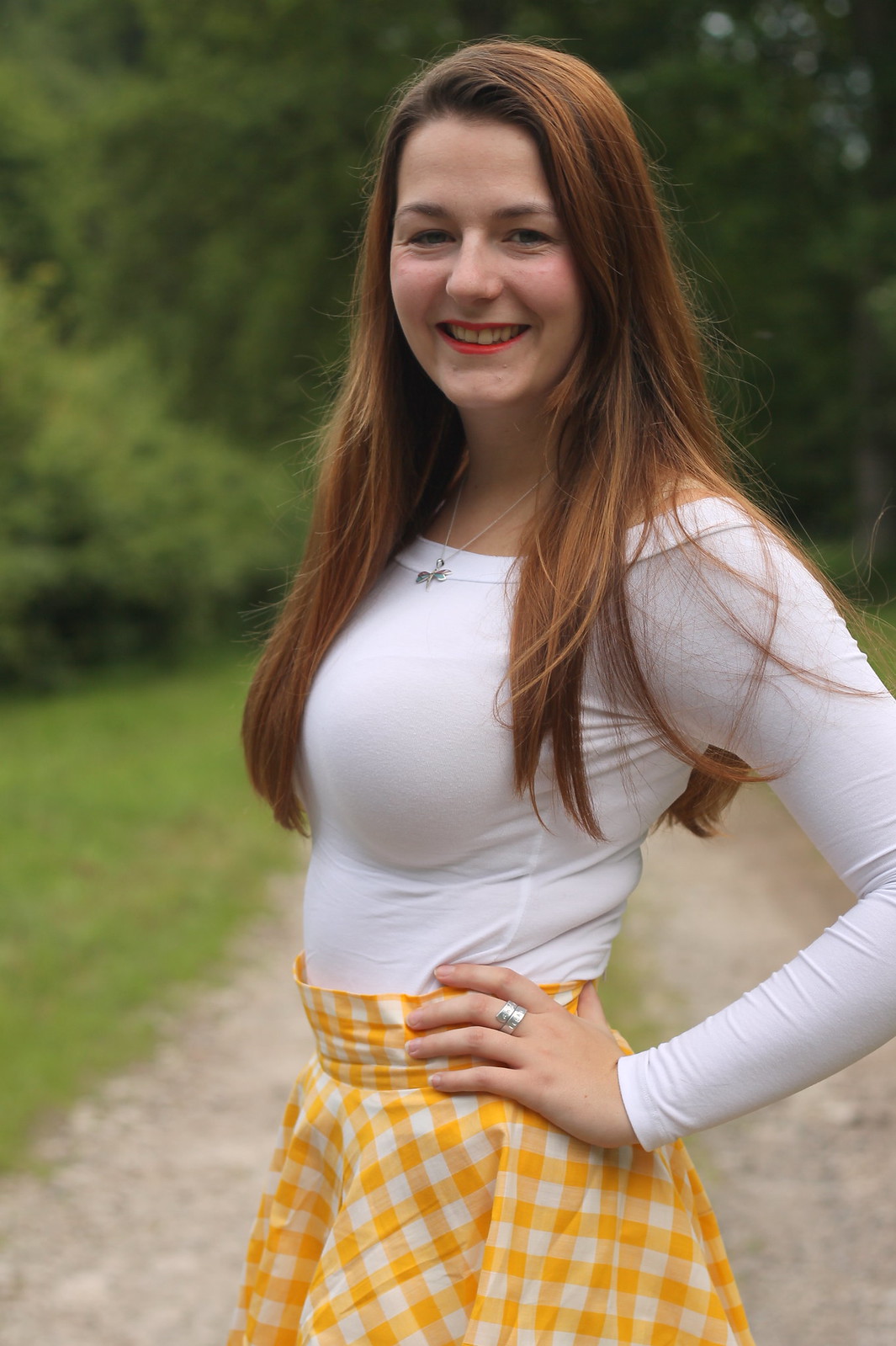 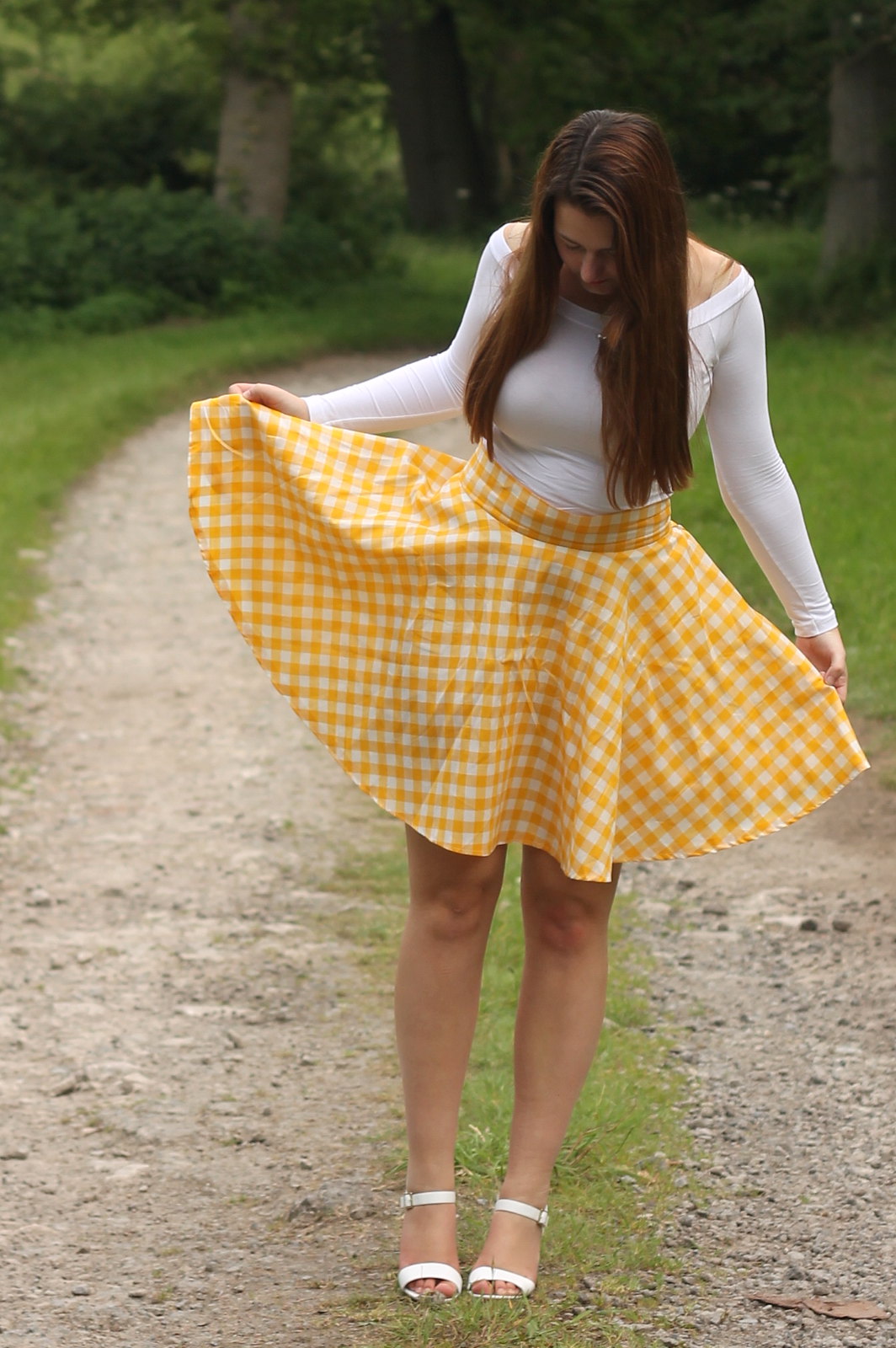 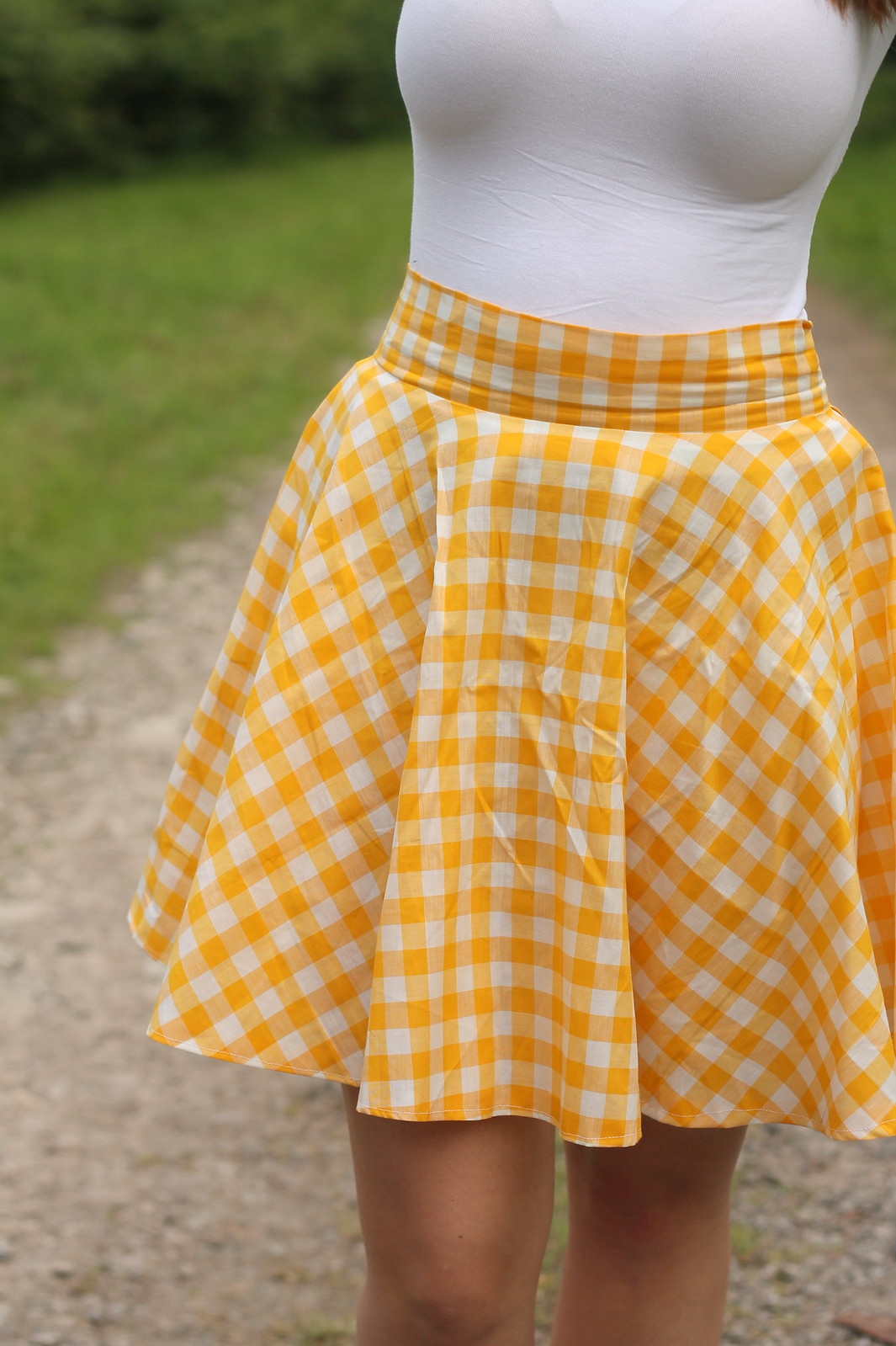 I apologise for the massive amounts of creasing on the skirt – I wore this to go to my parents’ last weekend for a BBQ with my baby cousins, and the first thing my mum said was: “Couldn’t you have ironed it?” Well, actually I did iron it as soon as it was finished right before putting it in, but then I sat around in it for a while before getting into the car to travel to my parents’ house, so I’m sorry, but it got creased – these things happen! I persuaded Ben to stop along the way somewhere so we could get some photos of the outfit.
I’ve been wearing these off the shoulder tops from ASOS almost exclusively recently – I ended up buying another white version since we don’t often put on a white wash (with there just being two of us and the fact that I shouldn’t wear white too frequently…I’m a bit clumsy that way), and I also have a black one. The shoes are new but definitely a new summer staple. They’re part of an upcoming collaboration with New Look, but I just had to wear them a couple of times before getting the post up. They’re perfect because they’re really summery, go with pretty much anything and have a nice heel height that’s good for work, although they do make my toes a bit chilly, but I guess that’s to be expected with sandals! In the same order that I got these, I also bought Ben some chinos, but he didn’t like them, so I’m being a bit cheeky – I sent those back for a refund, and I’m planning to use that money to buy another pair of these sandals in pastel blue rather than getting Ben a different pair of chinos!
And back to the skirt…again. I have big plans now! As I said, I’ve already made another out of some heart print fabric which fits better but is very slightly shorter. I also spent the end of last week making a couple of teeny tiny circle skirts for my cousins with elasticated waistbands rather than zips, which was another new thing to learn. Mollie’s is in a red polka dot fabric (just like Minnie Mouse she says!) and Eva’s is the same yellow gingham as mine. I presented them to them at Eva’s first birthday this weekend and forced them to try them on – luckily they fitted perfectly! Mollie then insisted on wearing hers underneath her dress for the rest of the evening, so I was pretty pleased with myself! I’m also hoping to try out making a longer version too, but that means making it in two halves that need to be sewed together as the width of the fabric dictates the maximum length, which is what I have been making. And finally, I’ll have a tutorial up in the next week or so to show you how I put it together so you can try it out too 🙂 I’m also planning on making a few for my friends to practise my skills a bit more, then hopefully I may be starting up something to sell them – let me know if you’d be interested in buying one at some point in the future! 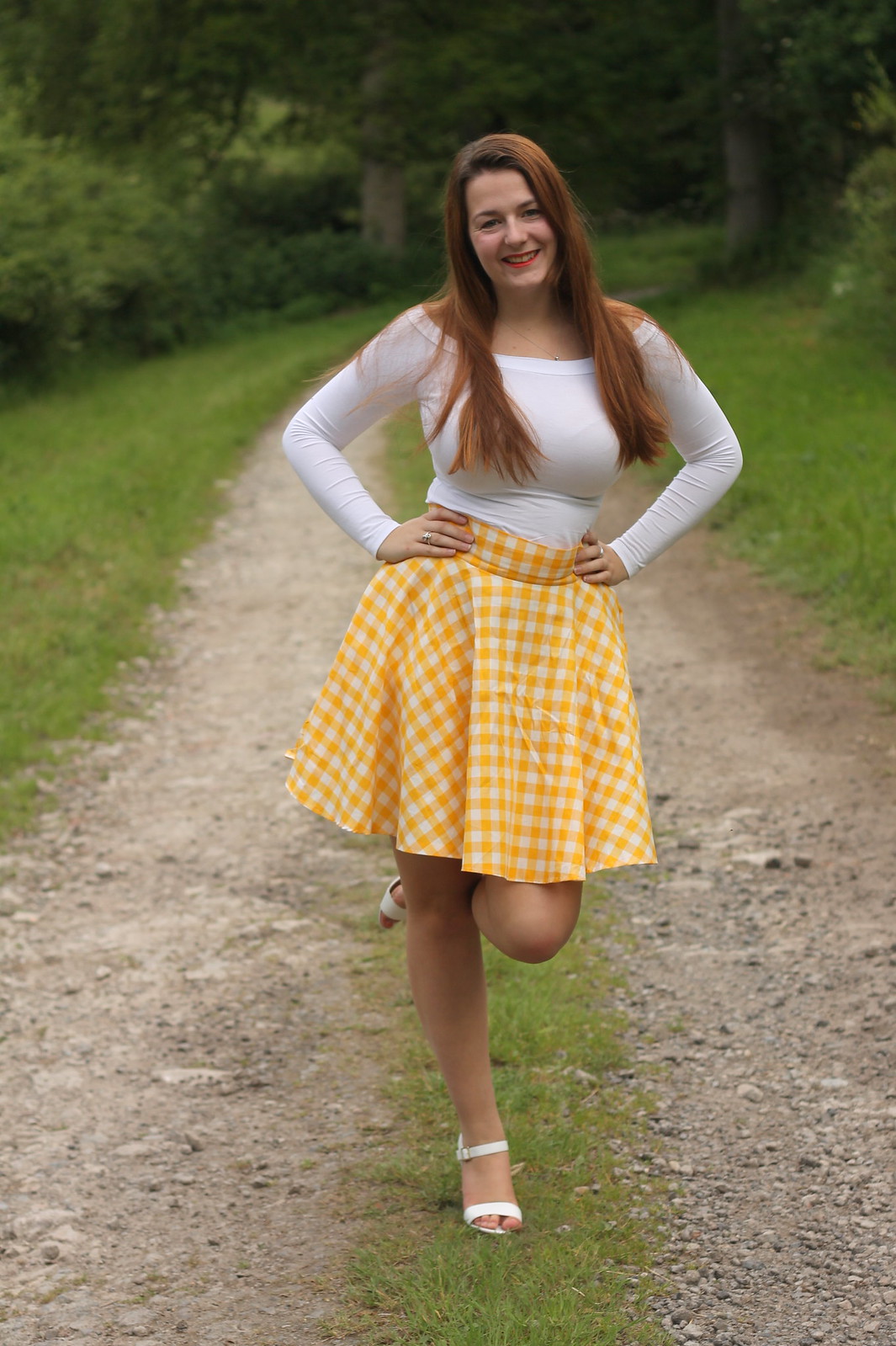 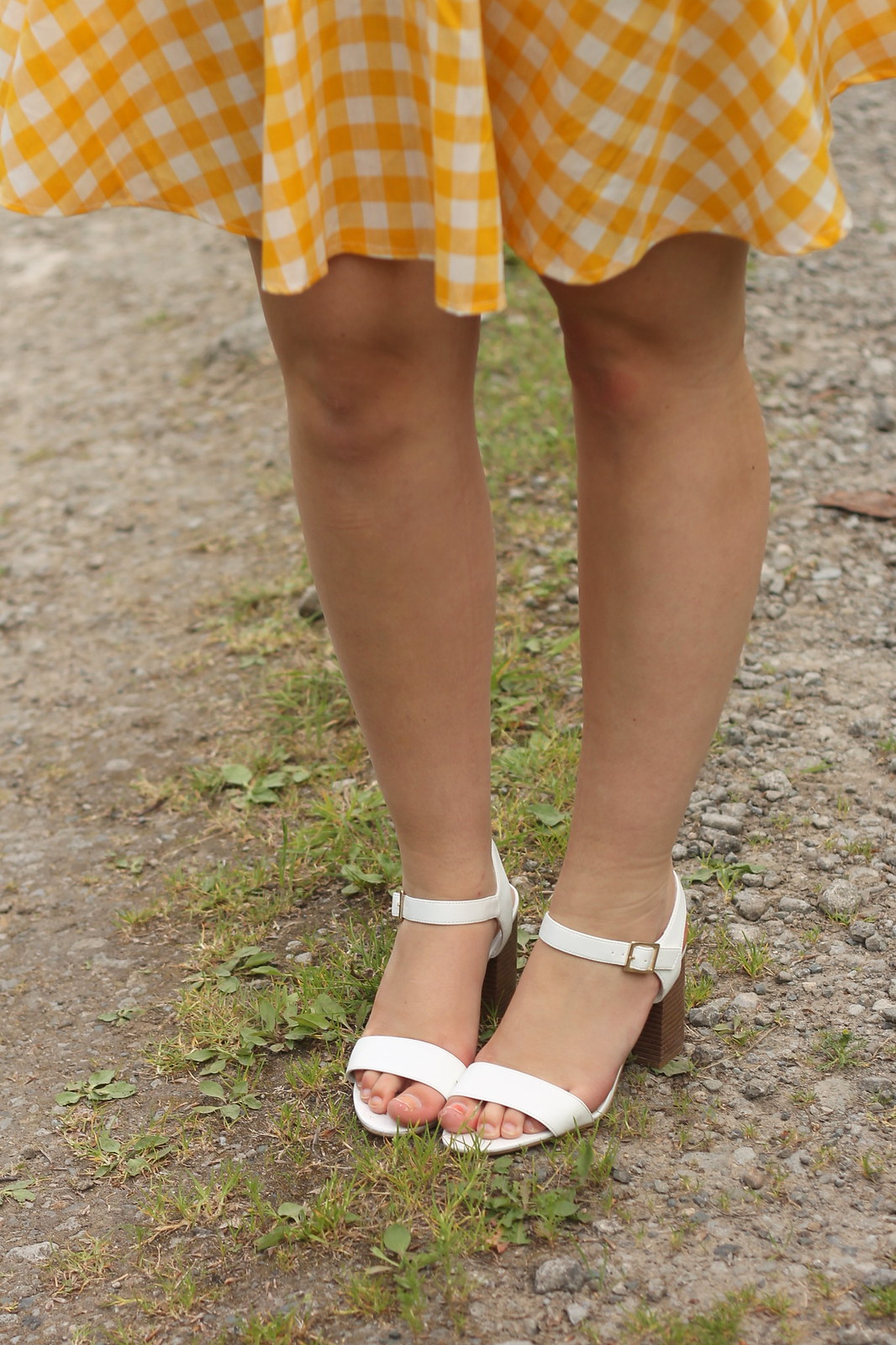 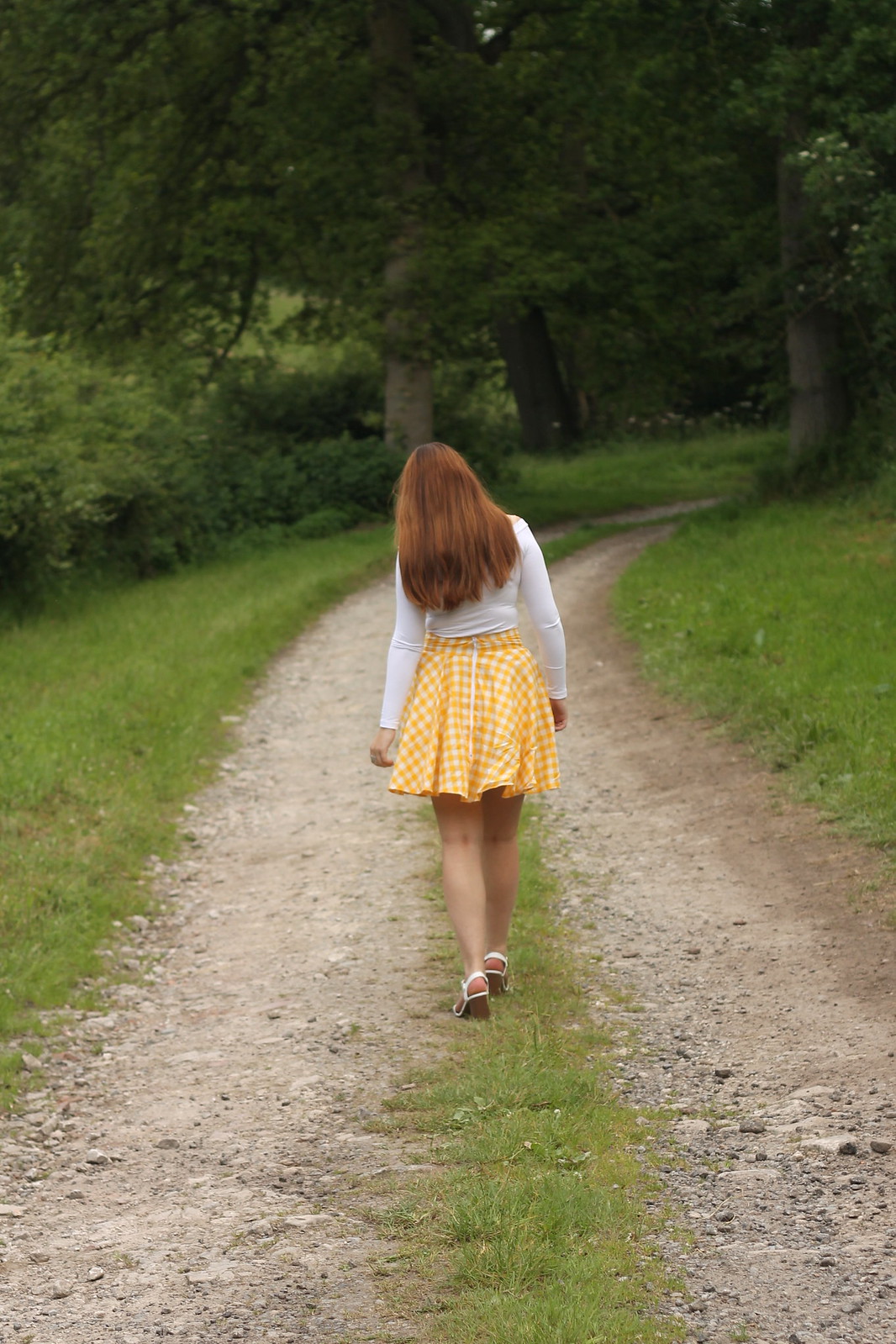