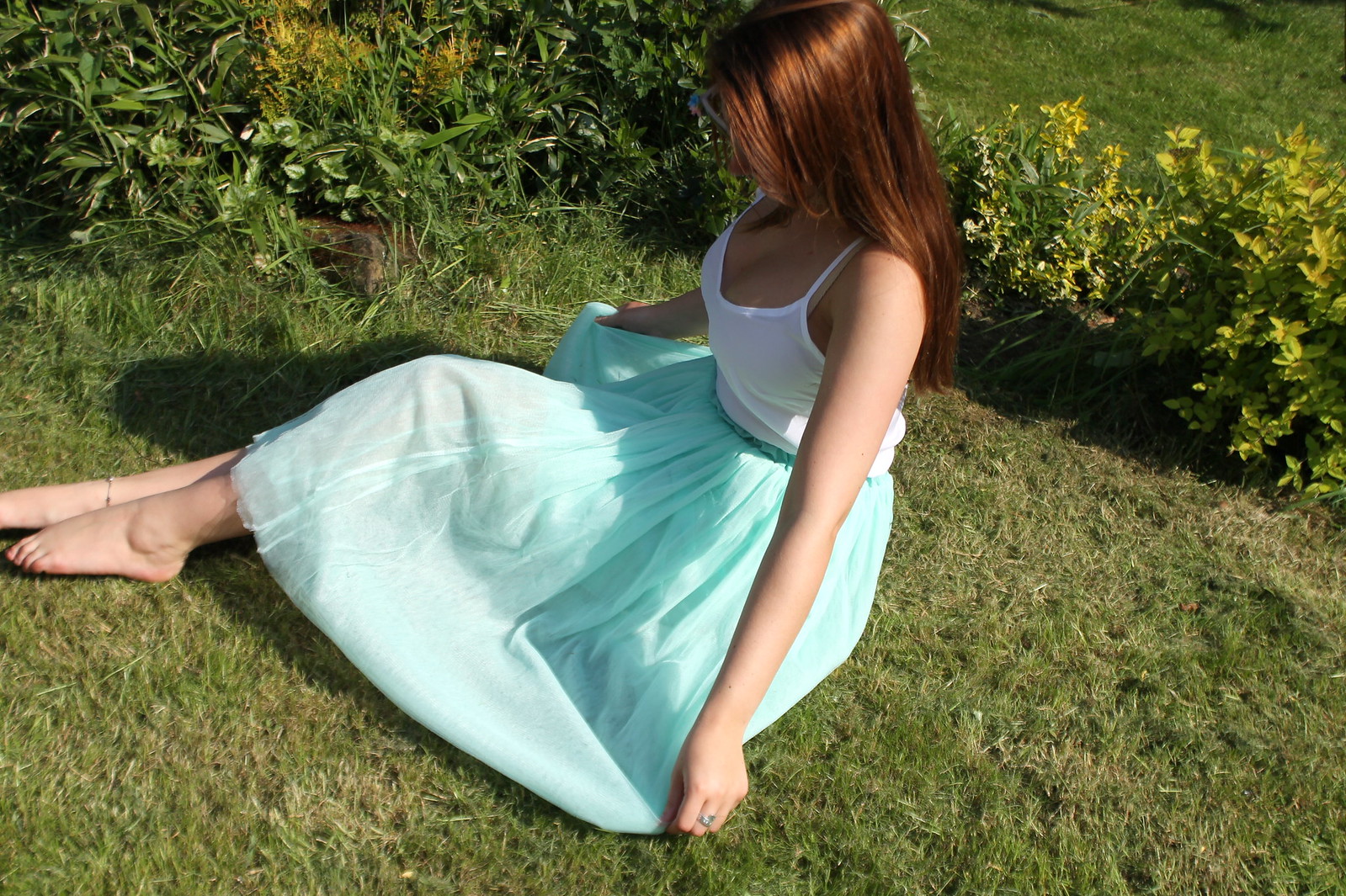 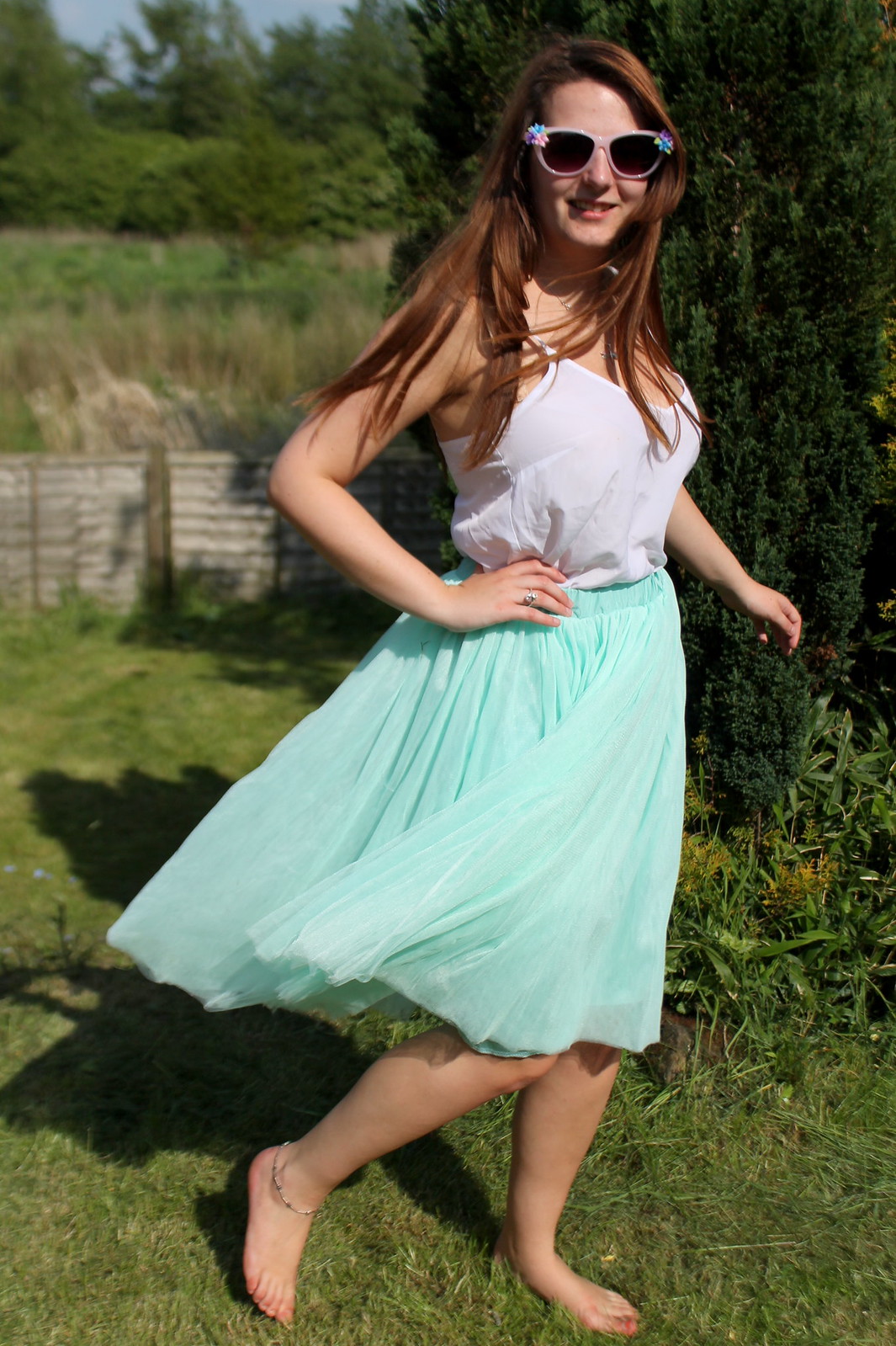 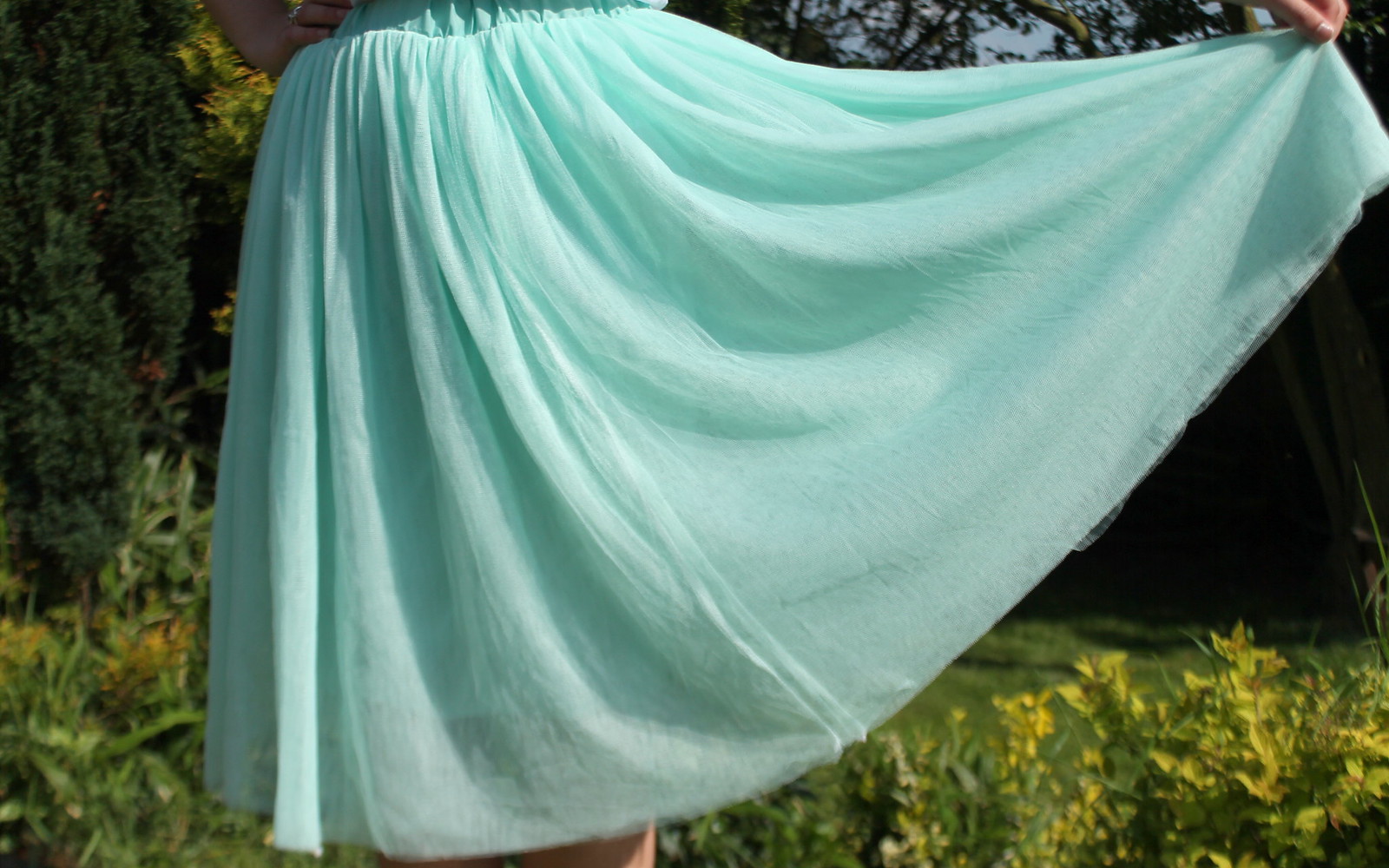 Sunglasses: Primark (similar-ish)
White Cami Top: ASOS
Mint Tulle Skirt: Available to buy at ASOS Marketplace
This is another my and Charley’s created outfits for my ASOS Marketplace listings! I bought this tulle skirt a while ago after going crazy for all those dreamy pictures you see on blogs and Pinterest with tulle skirts looking just amazing. It turns out that you can’t really wear things like that on a day to day basis to work in an office or just around where I live, so the skirt, sadly, has to go. It’s listed for £7.99, but I’m accepting offers PLUS I have a 10% ASOS Marketplace discount code for my items right now, just enter: ANGEL10 at the checkout 🙂
We decided to go floaty-fairy, lying in the grass in a dream, kind of style for this outfit. I could have done with some super photo editing on them to get the style just right, but I’m not so great with Photoshop (read: it took me 2 hours just to create a simple button for a blog the other day), so that’s a bit out of the question right now! But with a loose flowy top, bare feet and pastel pink embellished sunglasses (yes, I really do wear these places, and yes, my sister does get embarrassed!), I think it fulfilled the floaty-hippy-fairyness look we were going for! 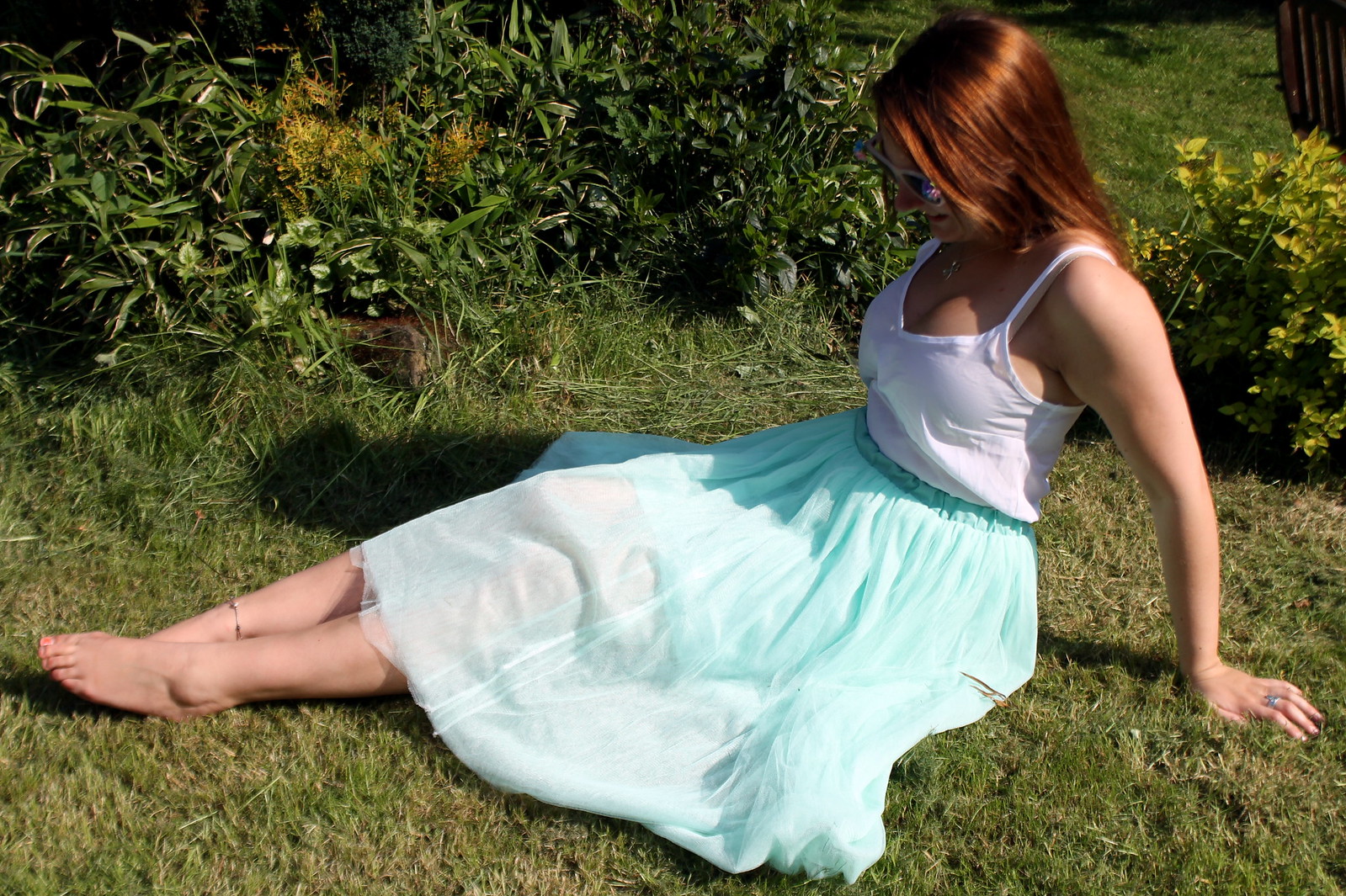 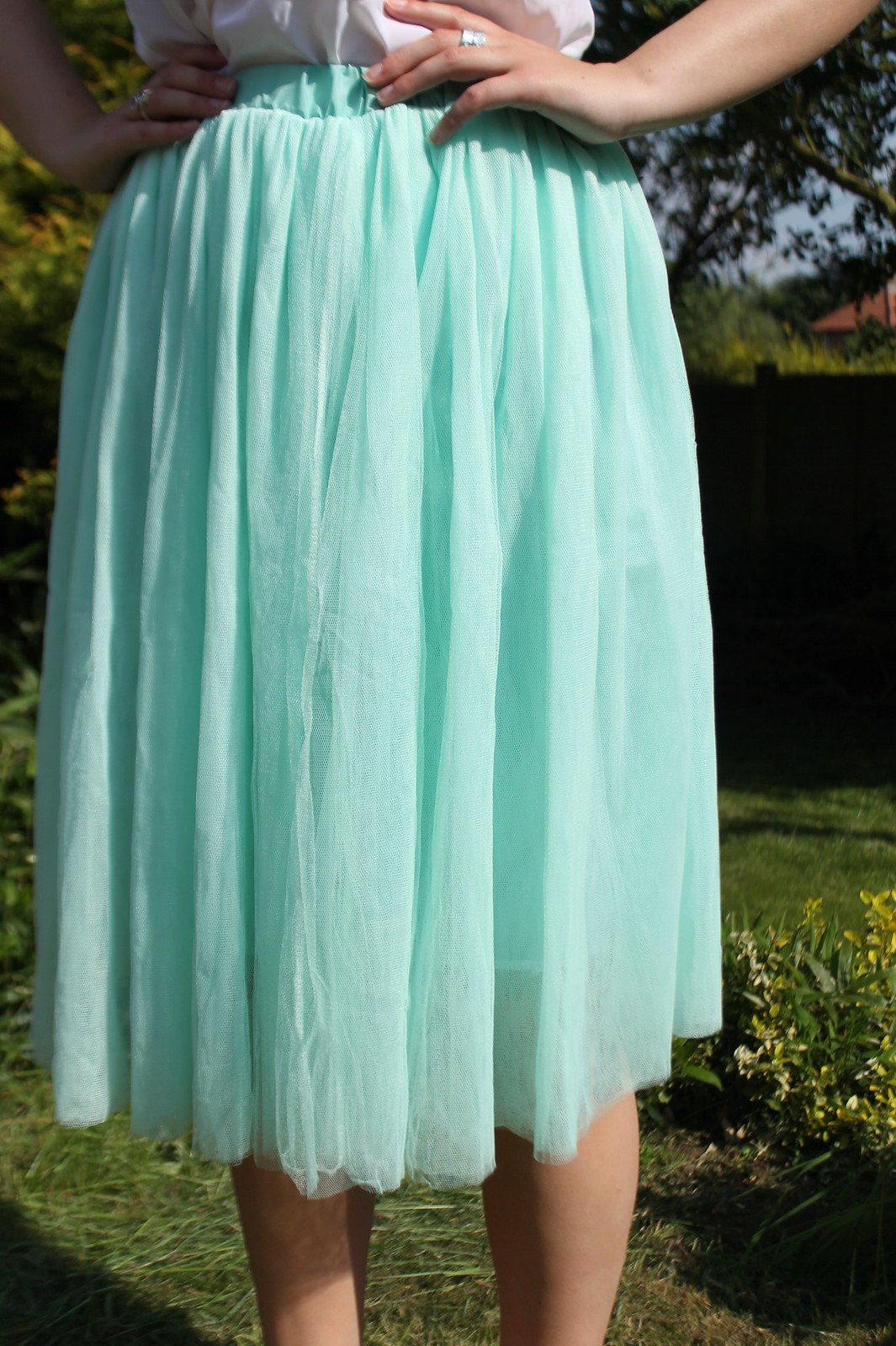 I’ve got a fairly busy weekend coming up, with a BBQ at my mum and dad’s house tomorrow night with my aunt, uncle and baby cousins (one of whom is 3 and a half now, so not so baby anymore! Remember when she was though?!). I really need to get some more pictures of them, particularly Eva who is nearly 1 now and hasn’t featured yet on the blog! Then on Sunday, I’m singing Haydn’s Creation in a concert at the Abbey in my old school! It’ll probably be a little bit weird singing there again, but I’m excited. I sing in my local choir, and about 10 of us from that are joining forces with the choir from Ampleforth for this concert. Charley is away with her play at the moment, so it’s just Fran and me for this one, and Fran has moved to the altos as they were lacking, so I’m alone in the soprano section (not totally alone, obvs, I just mean without my friends!).
I also managed to a bit more shopping last weekend with my sister. We went down to York to look at more independent and boutiquey type shops and were very pleased with what we found. My aim was to go to Bowler Vintage because I”m still looking for pin up and repro style clothing which I knew they stocked – I was a bit confused, because last I knew, this shop was Purple Haze, but Charley and I were discussing this amazing vintage shop she’d been to in York called “Bowler Vintage” and from her description, it was in the exact same place as Purple Haze. The confusion was solved quite simply in that they had just changed their name and added an upstairs for women’s clothing rather than having men’s and women’s all on the bottom floor – simples. I ended up leaving with, um, a whole outfit – woops. I did say I wanted to buy clothes I love though, and I loved these. This Hell Bunny dress along with a navy Hell Bunny cardigan and a 25″ petticoat (which you can also buy at Modcloth) made their way into shopping bags to come home with me, and I am definitely not regretting buying them. I’ve already worn the outfit twice, sans petticoat though since we went to a local pub and to choir practice and didn’t want to knock people out the way.
I was thinking I might try to do an sort of guide to independent shops in York sometime, since it’s a super unique city and has loads of quirky things. I know people say this about their cities all the time, but York is kind of different – tiny, cobbled, shambled (literally) and actually filled with small shops that deserve some love. We discovered a couple of amazing places at the weekend, so hopefully I’ll get the chance to get down there and photograph them a bit at some point. 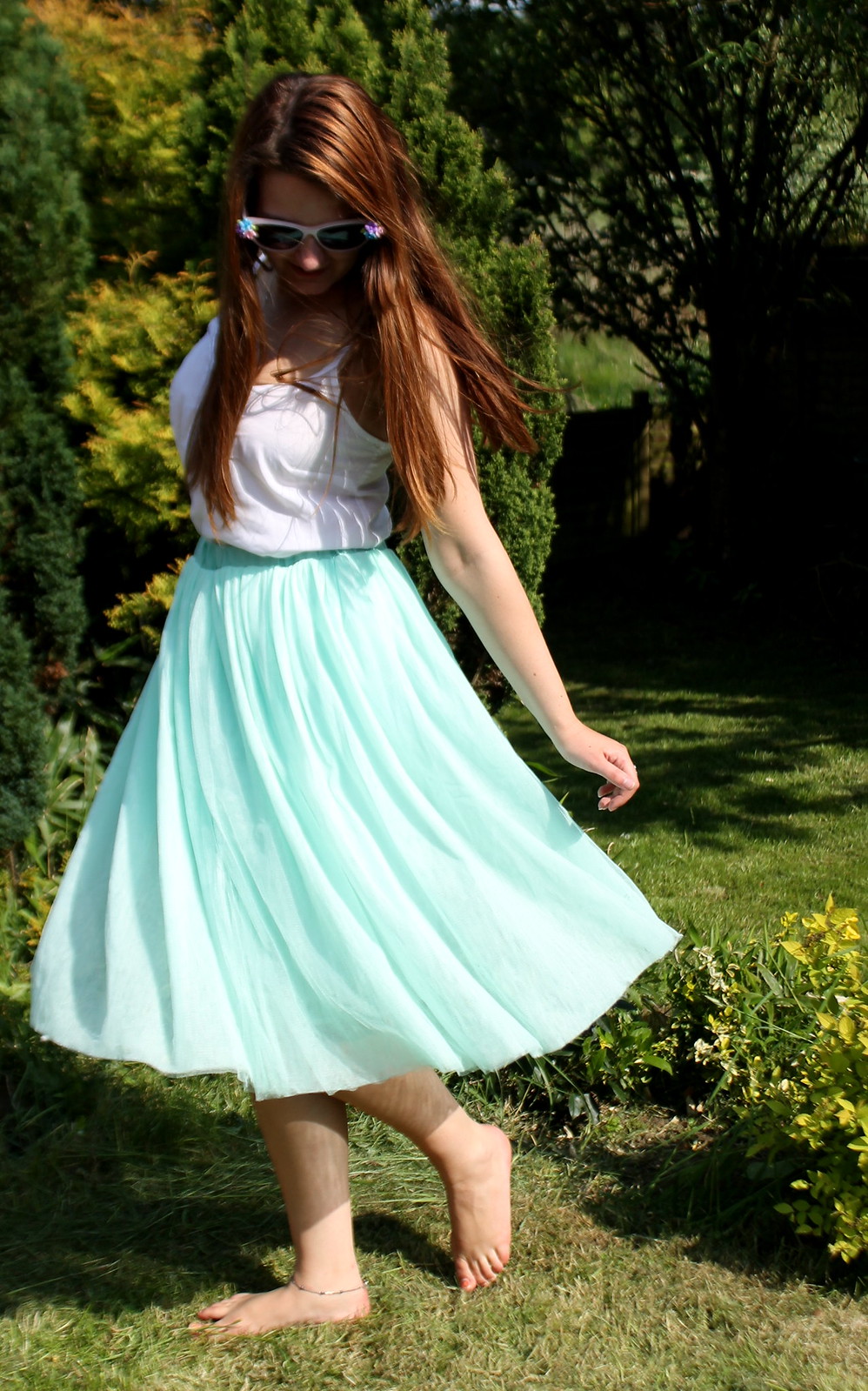 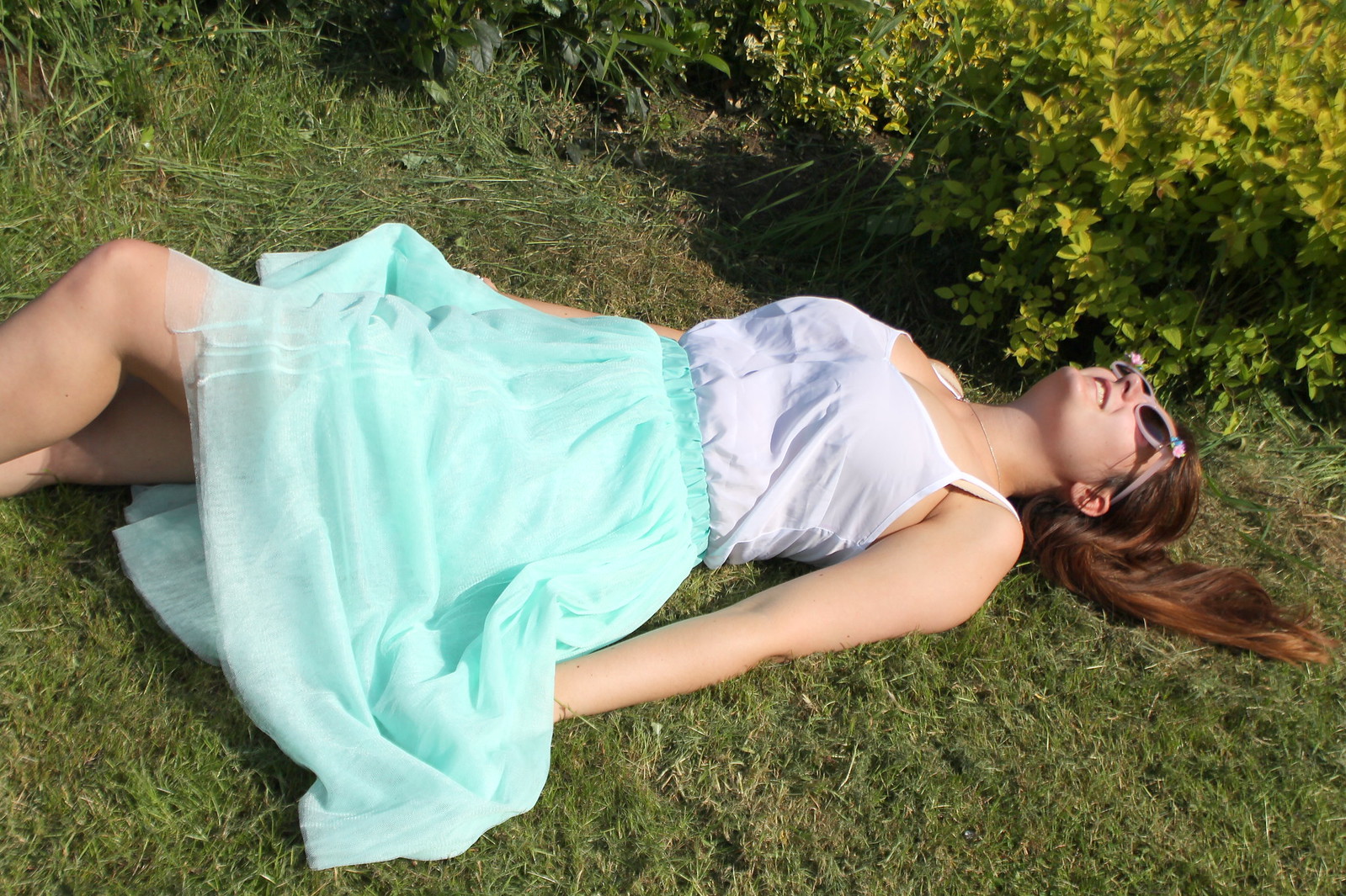