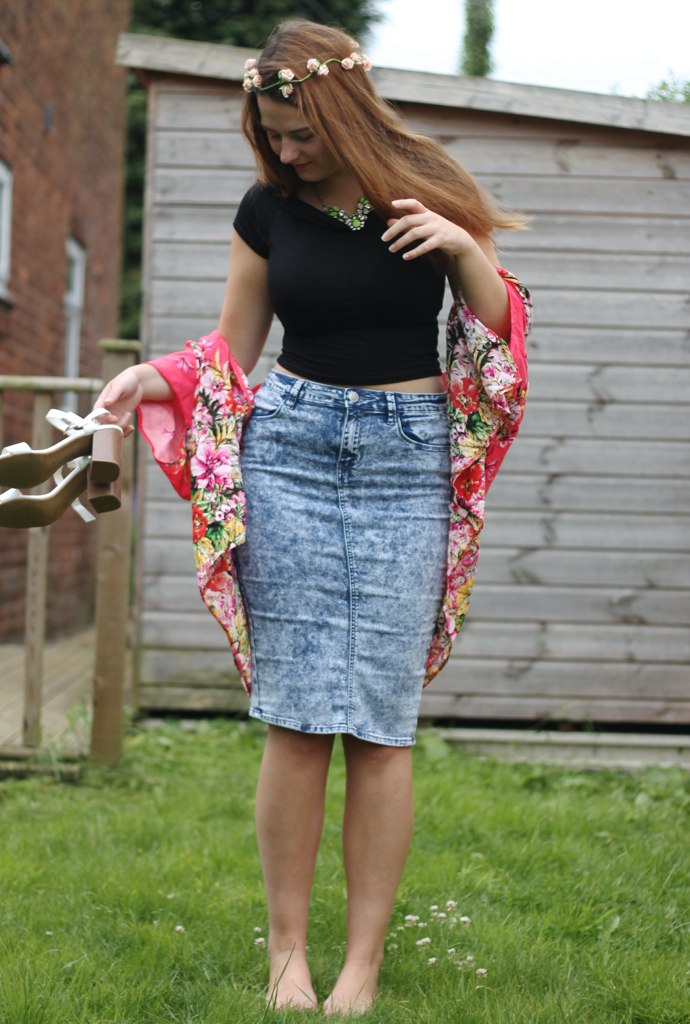 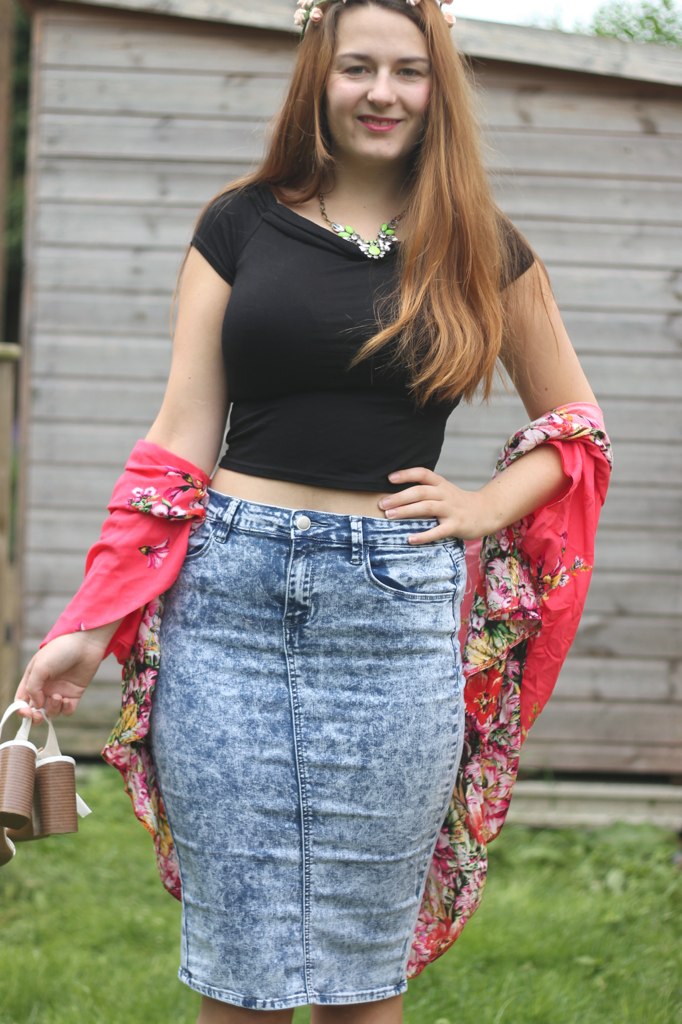 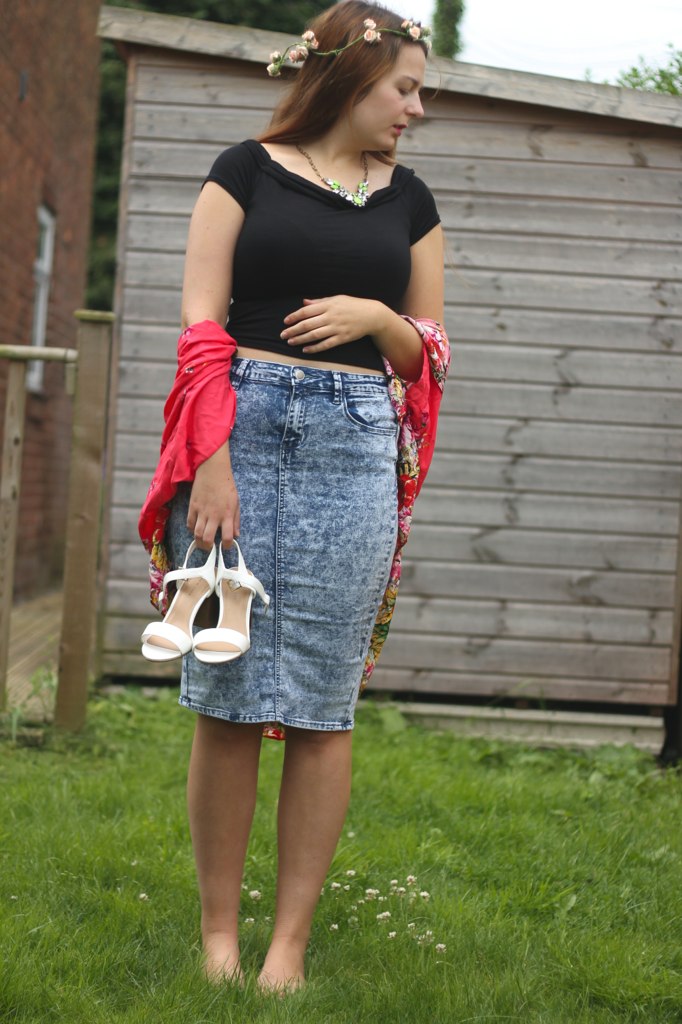 A very New Look outfit today, and for a reason! I was asked to put together an outfit to match up with New Look’s festival fashion range, including their Festival Fashion timeline. As you probably know, I’m not a big one for festivals – the muddiness and crowds tend to be a bit too stressful for me, and that’s not even mentioning my aversion to particularly loud music – I’m such an old woman! But I’m not one to turn down a fashion challenge, especially one which includes festival attire, something I am a big fan of (even if the outfits you often see put together in magazines aren’t exactly festival appropriate!).
So, I tried to put together my outfit based on the timeline New Look had provided for me. I knew I wanted a kimono in it, and when I saw the heeled sandals they had in, I knew I had to choose those too. So all I needed to complete the outfit was, well, some actual clothes I suppose. I wanted to make sure they wouldn’t be things I’d just wear for these photos then never wear again, so it needed to be something not to “out there” and nothing too short, as I’m not a fan nowadays. I decided floaty dress wouldn’t work with the kimono, and I couldn’t find anything lacey or crochet-y that would work, so I decided to go with this. So, what eras have I taken inspiration from for the outfit? The floral crown and floaty kimono are apparently part of the Bohemian trend popular in 1969 and Woodstock; this was the original plan, to go all out Bohemian, but I ended up changing half way through! The skirt screams of 90s festival fashion, 1992 at Reading according to the timeline, with its acid wash; and the neon necklace is modern “Neon Boho” apparently. Then the crop top is pretty modern I’d say, and the sandals, “Tropical Beach” maybe? To be honest, I just liked them and wanted them too! The crop top is actually from the teens range, because I noticed it was longer than all the grown up versions, and fits like a size 10, so is actually pretty perfect for me! 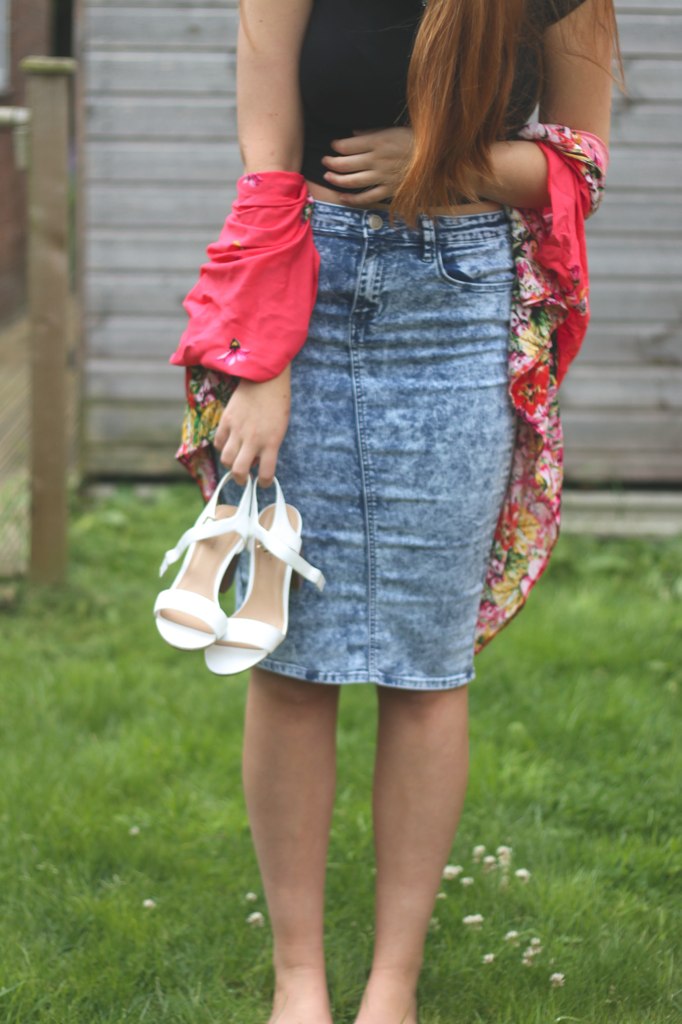 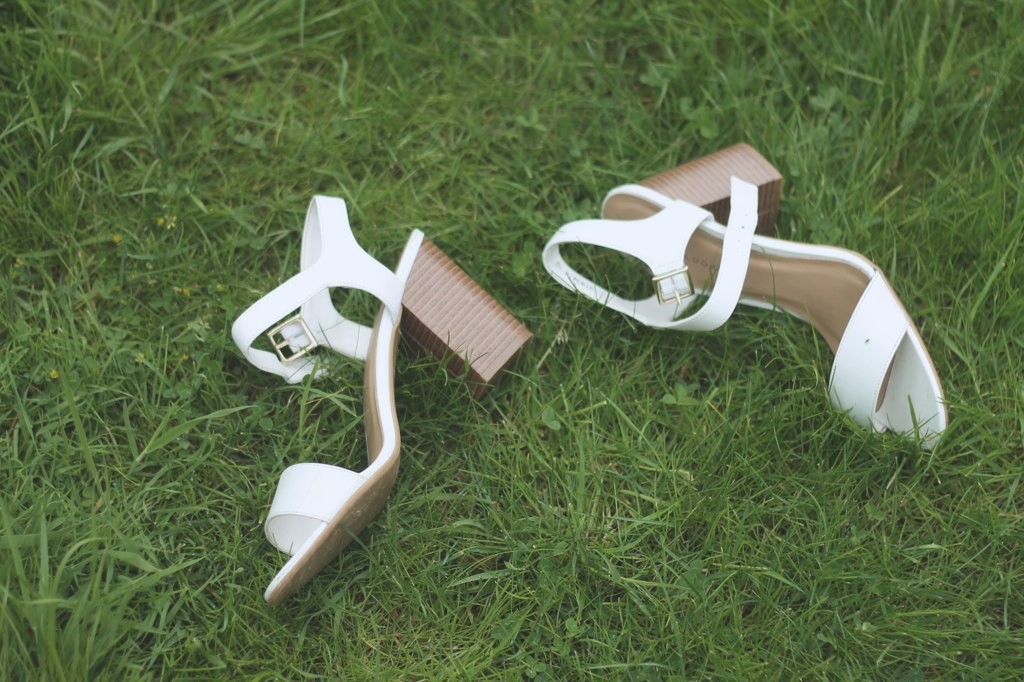 So, you might notice that I’m not wearing the shoes… and for a good reason! As I’ve spoken about recently, I’ve started running recently, and now had to stop. Somehow I’ve managed to sprain both of my ankes (yes, both!) while running. I did notice some pain in my last run, but then my feet went numb, so I thought “Ah well, the pain isn’t there at least!” and kept going. Yeh, pretty silly, I know. I have to run on a fairly uneven field surface, so I have had a couple of twists and tumbles on the furrowed ground, but thought nothing of it, but I think I managed to do that while my feet were numb and didn’t realise. It wasn’t until later in the evening that the pain set in, and now I’m kind of having problems walking, and moving, and just generally doing anything. It’s very odd because the pain feels like a bruise from the outside, but is above the ankle bone on the outside, and I’m unable to rotate my ankles at all. I’ve spoken to my doctor and apparently it sounds like a classic sprain, most likely a high ankle sprain, which explains why it’s above the ankle bone. So, I took the tubigrip bandages off for the photos, but there was no way I was putting the shoes on. I pretty much just kept my feet in place too before hobbling back into the house to put my feet back up again – the things I do for this blog! If they’re not feeling any better soon, I’m going to have to go in to see someone properly about them because it’s really frustrating now, and very sore!
I also had to have a blood test on Friday, so it wasn’t my best day ever! If you’ve been around here a while, you’ll know my veins and I don’t get along too well. At hearing there’s a needle in the vicinity, they will immediately retreat deep into my flesh and not come out, to the extent that when I had my gallbladder removed it took 16 attempts with a needle, and finally one of them hitting the ligament in my wrist and damaging a nerve, so they just knocked me out with gas. So I now immediately warn any blood-takers as I enter the room and spend the time before ensuring that my hands and arms are as warm as possibly can be to at least have a chance of finding a vein somewhere in there. And of course, this time was no different! It took the normal nurse, the practice’s senior nurse and a doctor, called out of his appointment, to finally get some blood out of me. I’m used to it being a hassle now, so I’m prepared, but it still doesn’t stop me feeling a little bit worried that they might just hit another nerve *ouch*! Luckily, it wasn’t too bad and they did get the blood out eventually. The good thing seems to be though that the veins are so far below the surface that I don’t tend to bruise easily at all, so all the stabbing doesn’t leave me with bruises at least!
Anyway, that’s about it for now! Another “Sian week” to be honest; these happen frequently! We’re also tortoise-sitting for Charley at the moment, which is fun, but we have to make sure the cats are away from him and not trying to eat him (not sure this could happen, but you never know). It’s been the Tour de Yorkshire around here recently, so lots of excitement, but we haven’t actually seen a lot of traffic! It did go through Ripon where I work, but it was yesterday, so I didn’t have to battle any traffic luckily. Today it went through York and near where Ben works too, so that was also exciting. 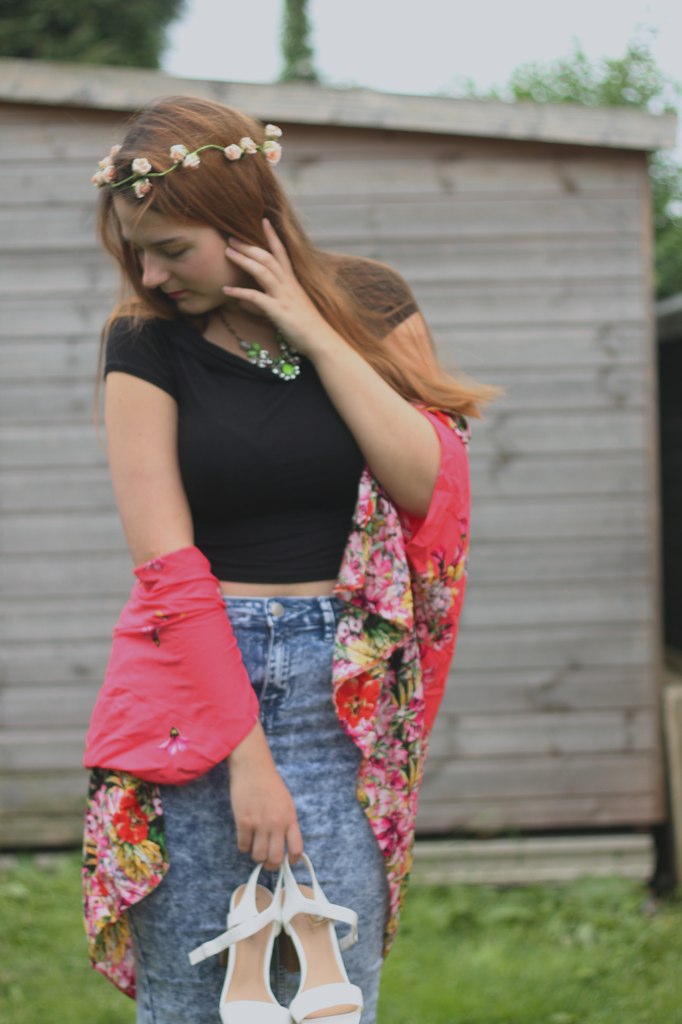 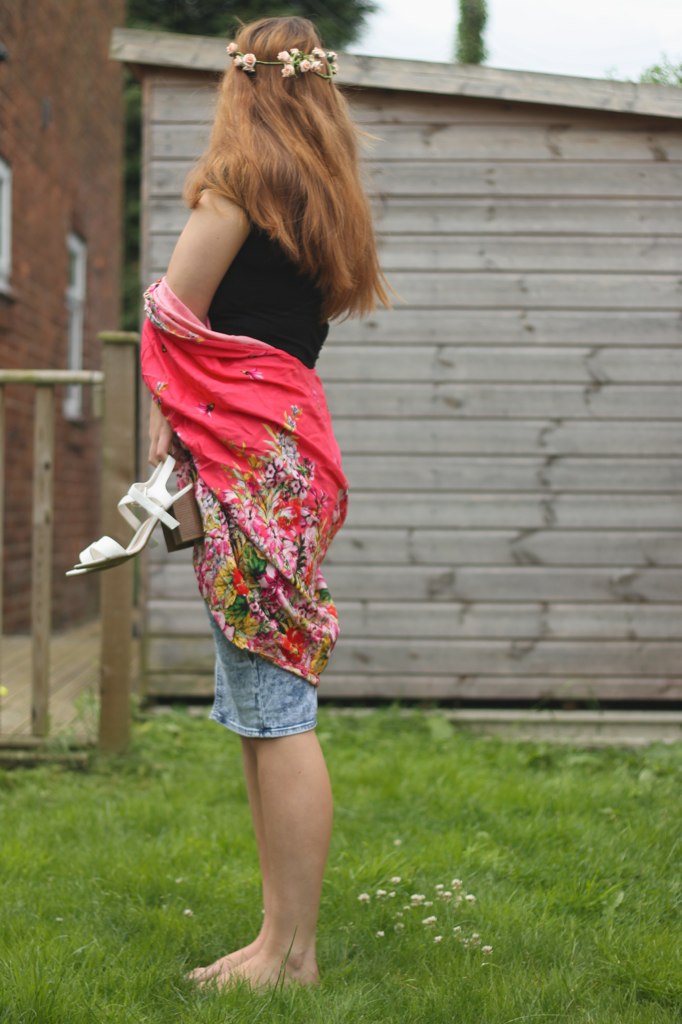