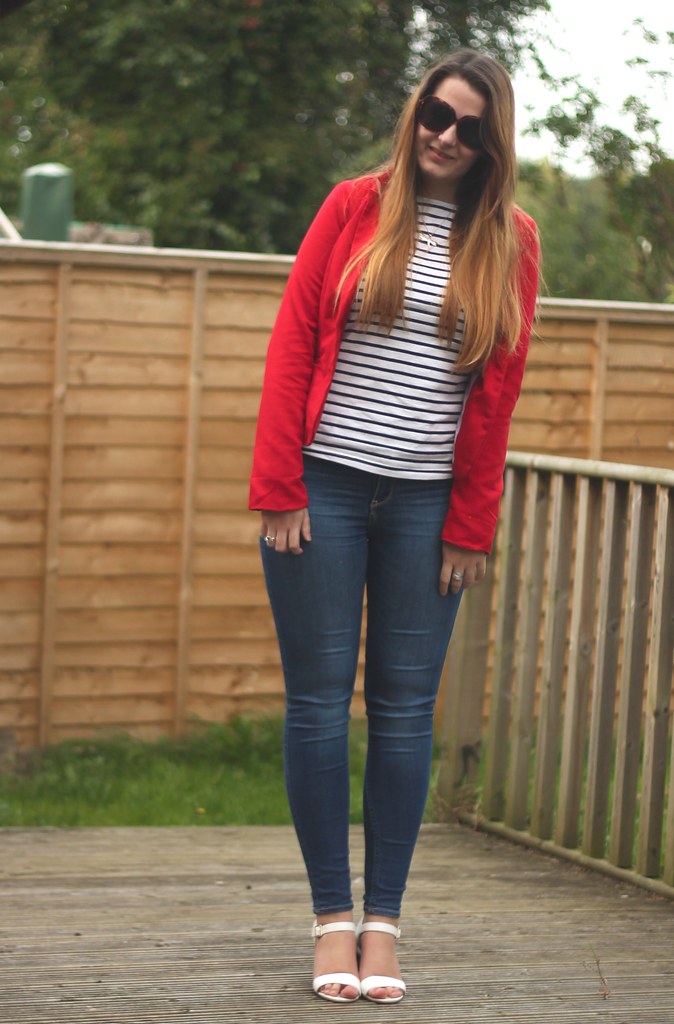 Look at this, I must be getting back into blogging again – an outfit post on the same day I wore it! It’s actually a fairly simple outfit from me for once too. It was just something I wore for work on today made up of pieces I’ve had for a while and wear over and over again. The blazer came from a shop in Canada called Sirens when I visited with my family two years ago – I don’t wear it as often as I should, considering it goes with quite a lot of things, but it’s a little bit tight across the shoulders so I don’t have much movement in my arms when I wear it! I have actually worn it once on the blog before, here back when I was a teacher and talking about my first experience of evening/night duty at school (and there were several more to come, all as stressful and tiring as the first!). The jeans have also shown up in the past on the blog before, unsurprisingly since I wear these about once a week or every couple of weeks – one more dressy outfit and one dressed down. The stripes with red is a classic look that I’ve recreated time and time again – I’m not going to search for all of the examples of that now, but here’s what I thought of as my most “fashionable” outfit when I was at uni, before this blog even existed! I received the top a couple of months ago from Joules and have worn it several times, but have only just managed to photograph it. It’s great for dressing down comfortably as it’s nice and loose but a thick material too, so it’s comfortable and warmer than most other tops I own. Weirdly, I had to get this in a size or two smaller than I’d usually go – this is a size 6, and as you can tell, it’s still baggier than I’d usually wear. I think it’s supposed to be slightly oversized, but after I’d seen them in store, I decided to size down as far as I could as oversized tops don’t generally work well on my figure since my waist is my smallest point by far and not accentuating it can make me look a bit swamped.
I decided this should be a “transition” outfit, something you’re probably fed up with hearing about already at this time of year! I thought wearing jeans with a blazer to cover up from the chill, but paired with summer sandals for the last time before it gets too cold, would work well. I’m not entirely convinced by transitional outfits – for me they usually just consist of my usual wear but with tights or a warmer jacket over the top. 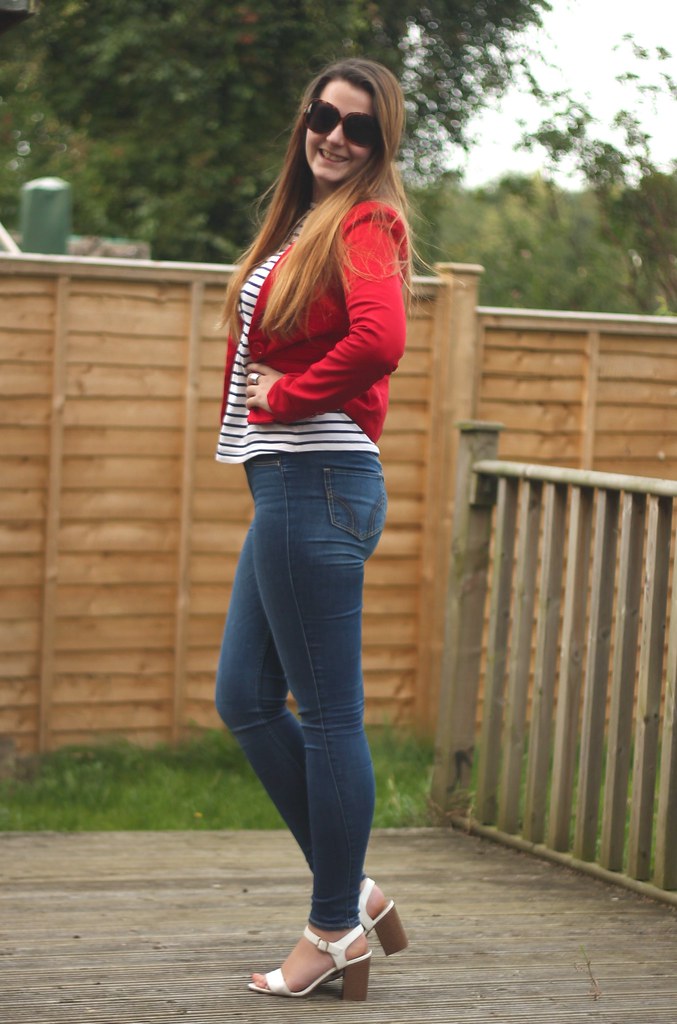 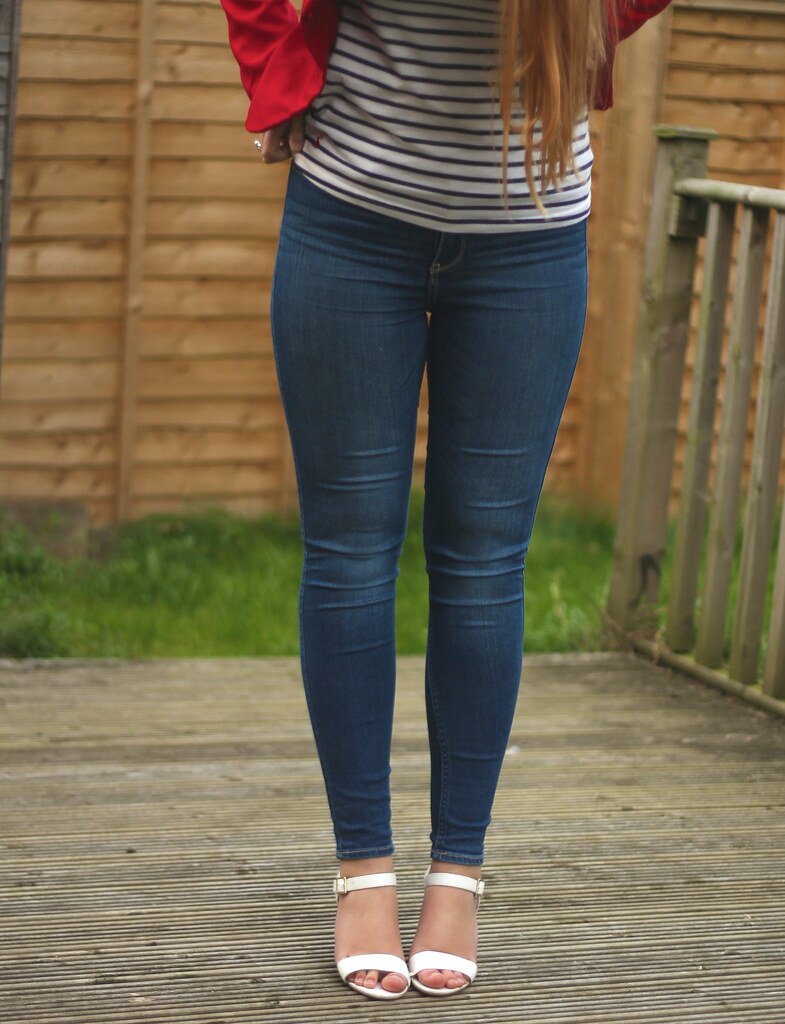 So, what’s been going on lately? Not a lot too exciting really to be honest! Lots of work as usual, but also a few things outside work too. I met up with a local lady on Friday evening to talk about signing up for Brownies – yes, I know I’m too old for that, I mean becoming involved in Brownies! I’d registered my interest in volunteering online, so went to chat to her about it. And tomorrow night I’m going to be going along to the first meet of the term to see what goes on and how I might be able to get involved. I’m excited to go along and see what I can do. As some of you know, I taught for nearly a year, over a year ago now, and did actually really enjoy working with the kids. But due to my health and deciding that teaching wasn’t ultimately what I wanted to do as a career, I gave it up to work in Digital Media. I do miss working with children though, and I’ve always especially loved being with the younger ones, so I thought it would be fun to give it a go.
September is also exciting because it’s the month of my biiiirthday! I’ve been making wishlists for months, although I kind of had to go back through them and make them actually affordable since they were mostly comprised of corsets and expensive lingerie, oops. And I’ve been thinking about more interesting things to do too. In the past I’ve been given gifts such as tickets to the ballet in York, and I’ve bought tickets for my sister and I to see the pantomime too for Christmas, so I’ve been looking at what’s on at theatres for ideas. I love the idea of seeing The Marriage of Figaro, but it’s a bit far for me to travel – fun story, at school I used to be part of the Opera Society! It meant that every couple of months we were taken on trips (usually to Leeds) to see an opera that was on at the time. We also got a nice meal and the occasional quick stop at the shops too, but my group of friends also in the society all actually loved the opera too, so it was always fun. I would also never say no to a musical (but you have to bear in mind that I’ll be singing whatever it is for weeks afterwards!) or a local play. Ben has made some suggestions to me, so we’ll see what happens when it reaches my birthday! But I think I’ll be going out with my family to a local pub or restaurant as we always do, so I’ve been trying to decide which one as I’ve got lots of ideas! Anyway, it’s not until the end of the month yet, and I should probably stop talking about myself now! 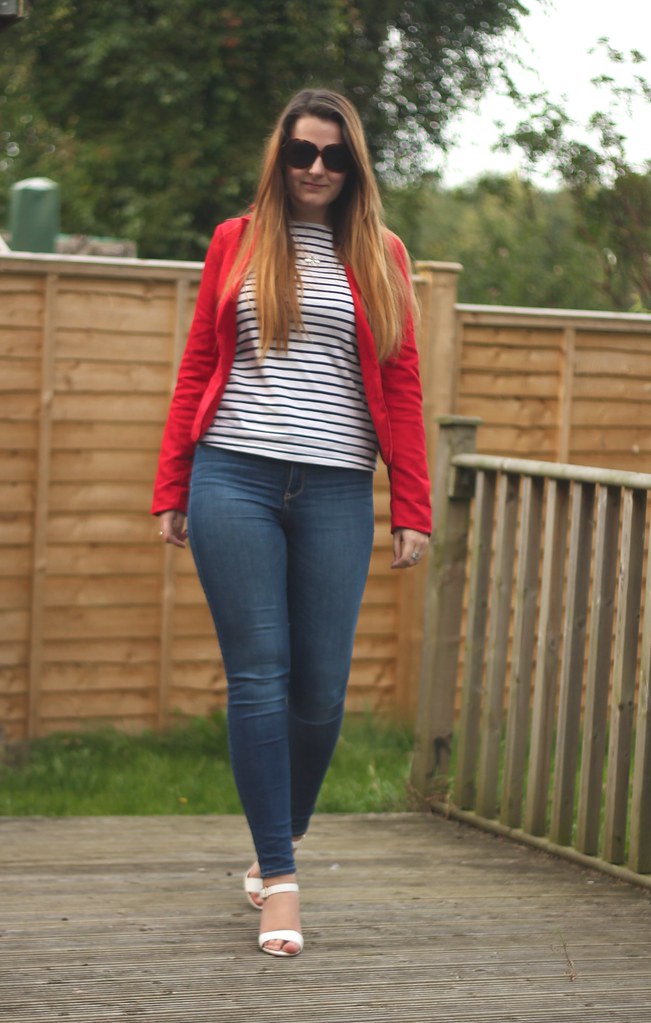