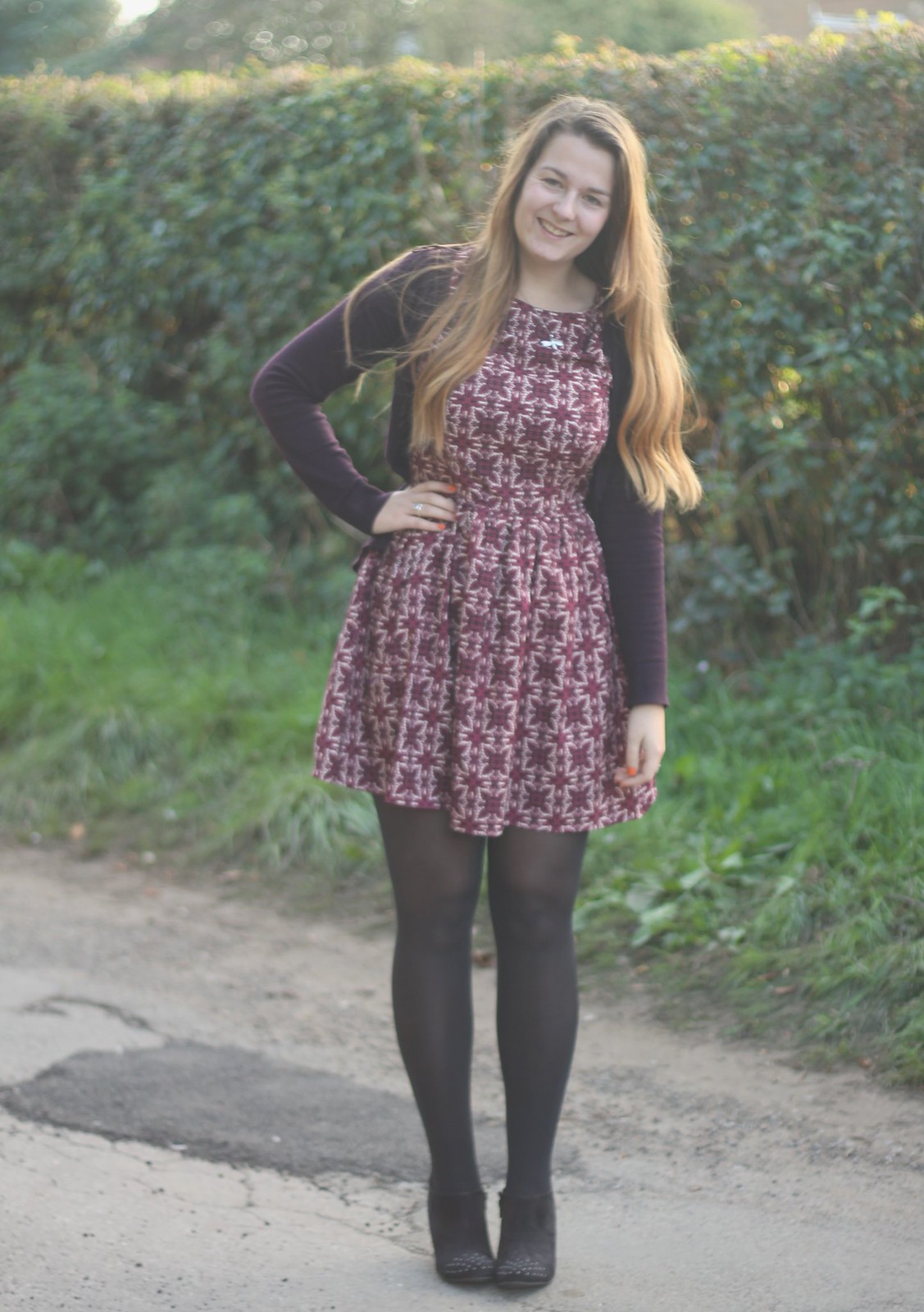 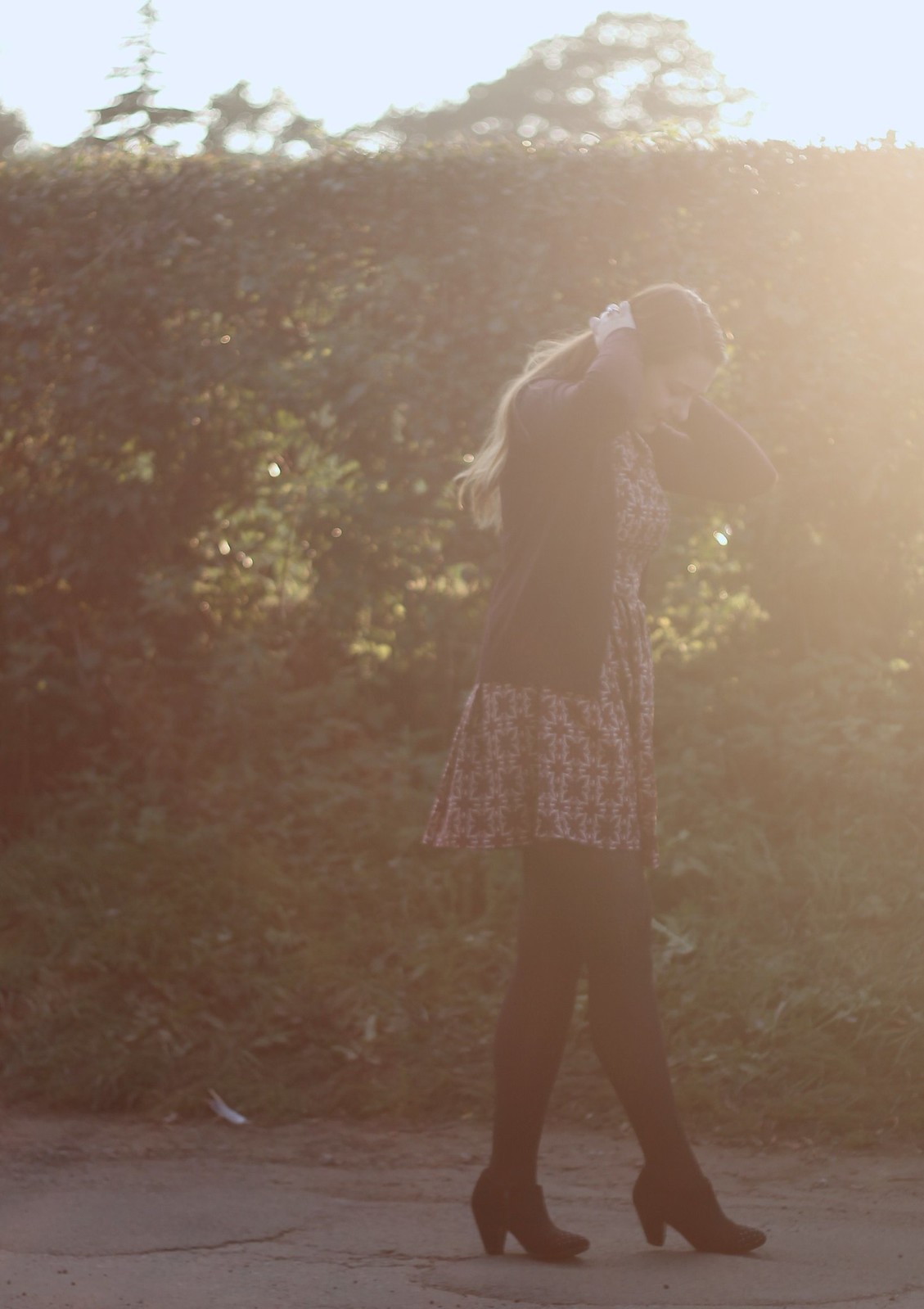 Burgundy Cardigan: Dorothy Perkins
Paisley Dress: Primark
Heeled Boots: F&F
So, I have a confession: I gave up on my 15 for 15 🙁 But I do have a reason – my horrendous cold/flu I had last week. I did wear an outfit made up of 15 for 15 items on the first proper day of feeling ill – the stretchiest, most comfortable pieces I could find, but when I felt even worse on the next day, I ended up in a onesie and duvet all day. I was really poorly that day to be fair – I ended up a little bit delirious from the high temperature I had, and, apart from crying down the phone to Ben because someone had texted me and I didn’t understand what it meant (it is pretty clear now, it was an easy question…), I don’t remember much of that day. I’ve now only just reached the point where I’m feeling like I have a “normal” cold as opposed to whatever was going on last week, so I just have to get properly over this now. But as I said, it meant the end of the 15 for 15 unfortunately, although I do still have a couple more Instagram pictures of outfits and a properly taken set too to show you still, and I would imagine the clothes will make other appearances on the blog in future too!
Anyway, aside from having flu, let’s get updated on what’s going on in my life…as of yesterday, I’m now 24 – scary! I was still feeling not so great last night, but my parents came over to see me, and I spent most of the weekend at their house – I went round on Saturday, watched a Saving Mr Banks with my sister, then out for a meal in the evening at a local pub, then we went to pick sloes for Sloe Gin on Sunday morning and were harassed by a pair of nosy horses! 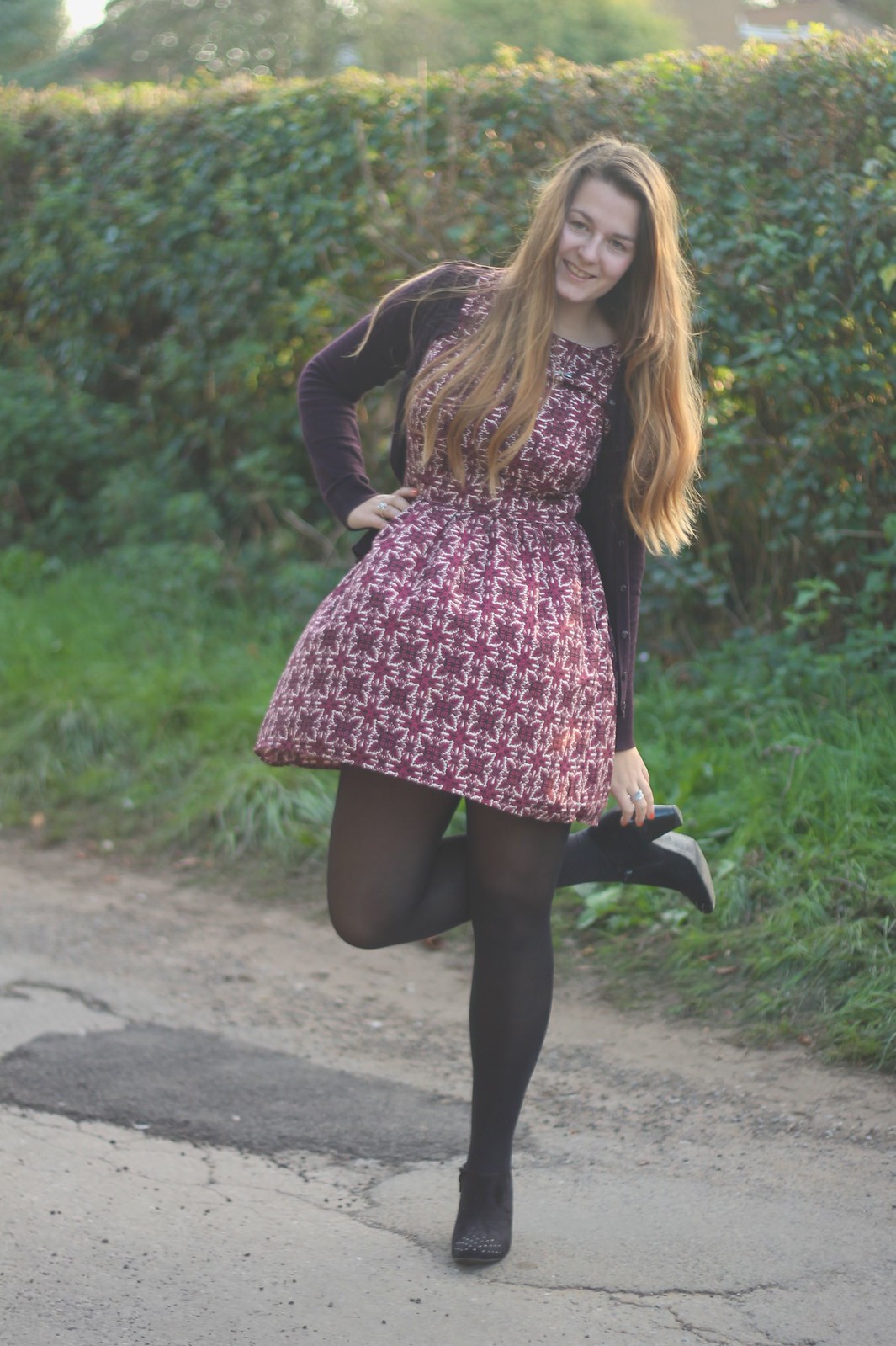 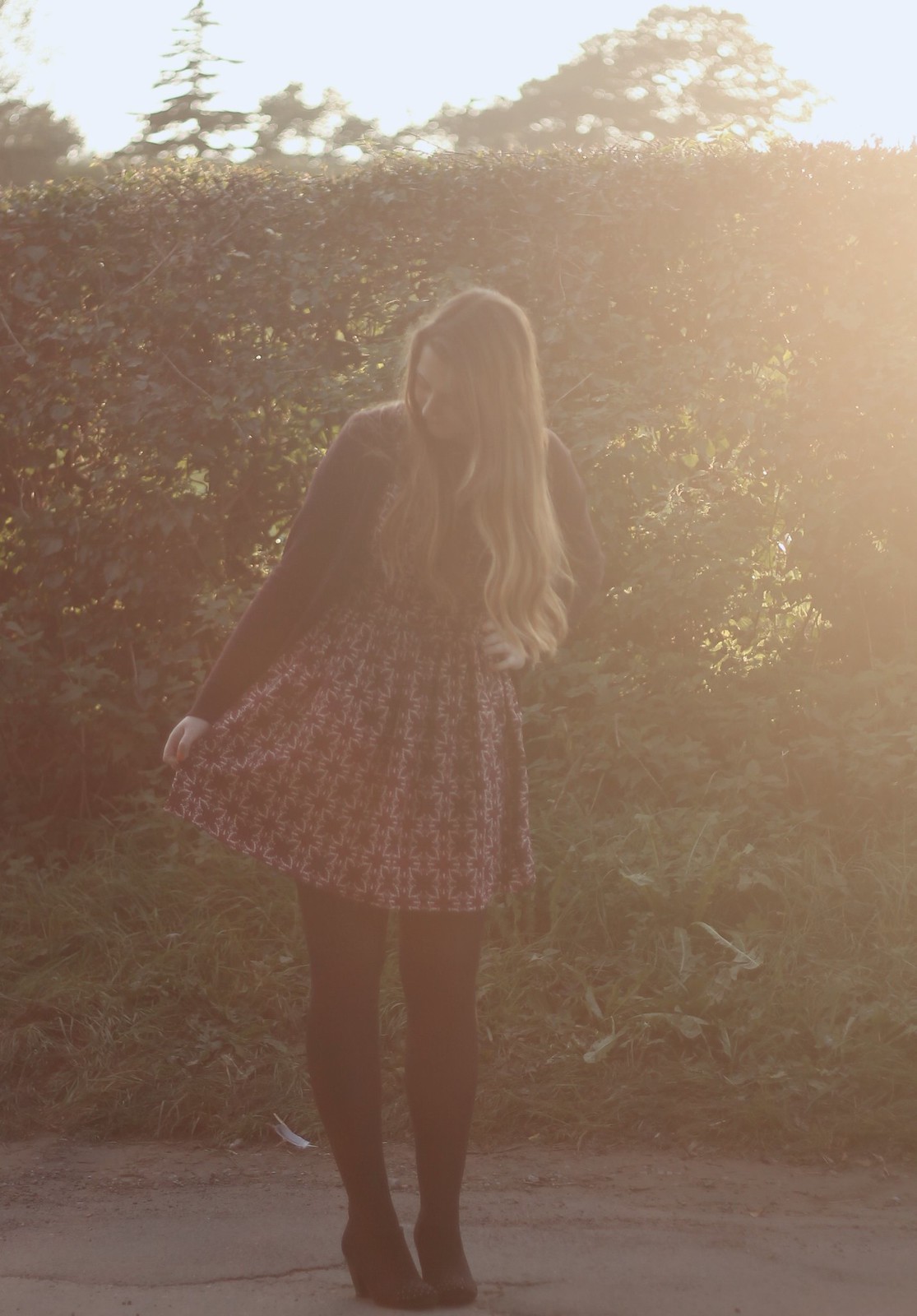 It wasn’t the most exciting of all birthdays, considering that I was still feeling poorly, but I still had a lovely time and got some really really lovely presents – I can never believe how well people know me and what to buy me, despite apparently being “difficult” to buy for because I like everything! I’ll maybe do a proper round up sometime, but the first present I opened was from Charley – this gorgeous pair of gloves from our favourite vintage shop, Bowler Vintage, in York. My sister created this spectacular cake for me, complete with Belle and Charlie plus a little sign that says “Happy Birthday” in Ancient Greek, of course!! From the parents I got a cardigan from Voodoo Vixen (which I’m wearing today), a Pepperberry dress, tickets to the opera, chocolate…and the list goes on, and from Ben, a corset making kit (oh my goodness!!), lots of chocolate, some Duck Tape (I will explain this in a future post…maybe! Hint: it’s to do with sewing!) and a Great British Sewing Bee book complete with 25 patterns! Lots of sewing stuff from everyone 😀 There are plenty more, but as I said, I’ll do a proper round up soon 🙂
Onto the outfit, finally! I’ve had this dress since last year, and it seems to work well in every season, but I like to wear it best in autumn because of the colour, which, as you can probably tell, I’m usually obsessed with at this time of year. I’m having problems with shoes at the moment, because I mostly want to wear flats or lowish heels before the weather really kicks in and I have to wear boots all the time, but I’ve almost destroyed all my flats from too much wear (one pair I’ve left at a friend’s house too, oops), and they look really scruffy. So I’ve been trying to find another pair to wear, but don’t really want to go for another pair of cheap Primark ones which I ruin in a matter of weeks or other high street brands which are usually flatter than flat and make your feet sore. I’ve been searching online for a pair which are reasonably comfy and not excessively expensive, and also the Designer Outlet at York, but still haven’t managed to find the right pair yet, any suggestions? Really I think I’m looking for some white quilted, black toe cap style, like ones I always go for every year, but I’m struggling to find ones I like this time! 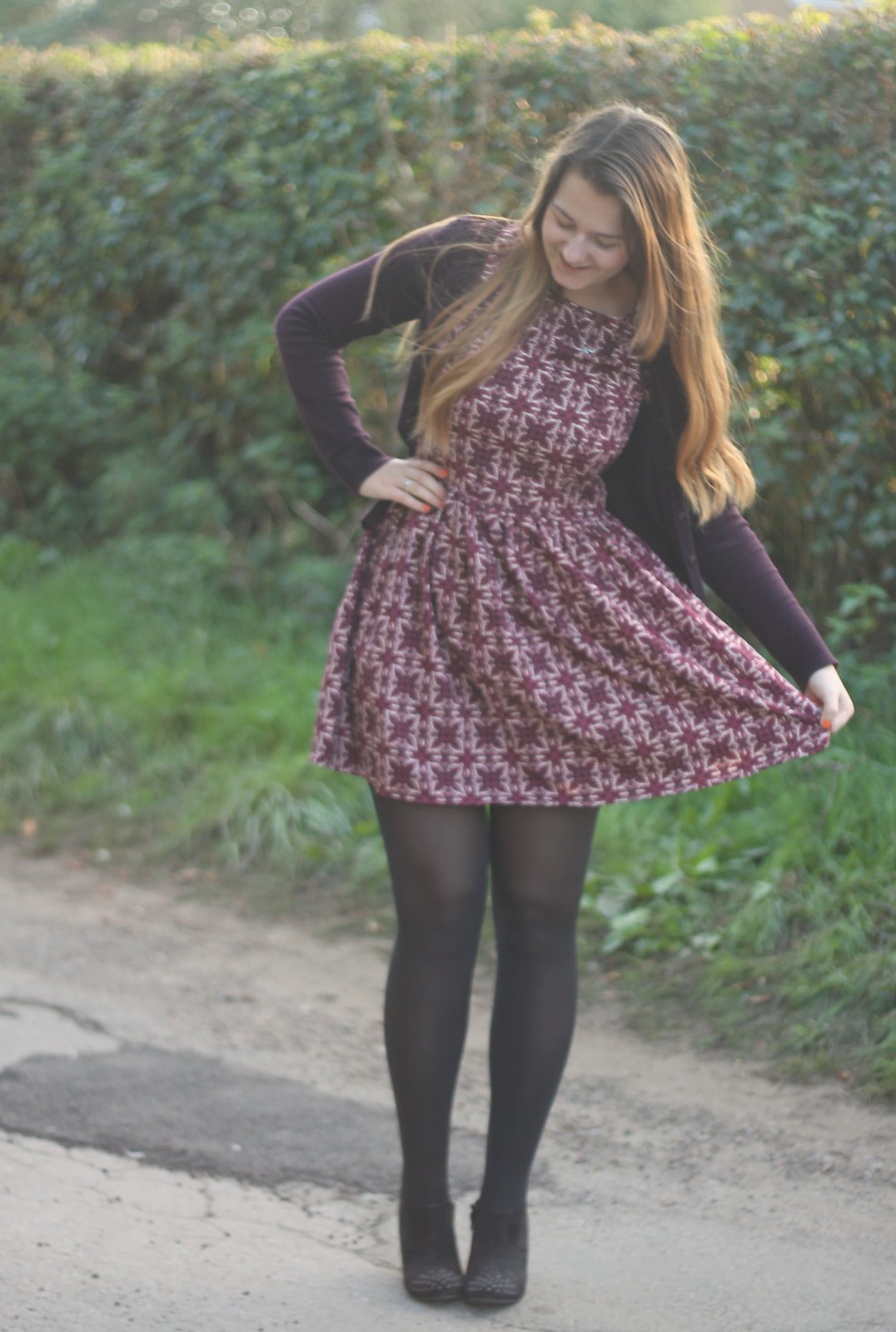