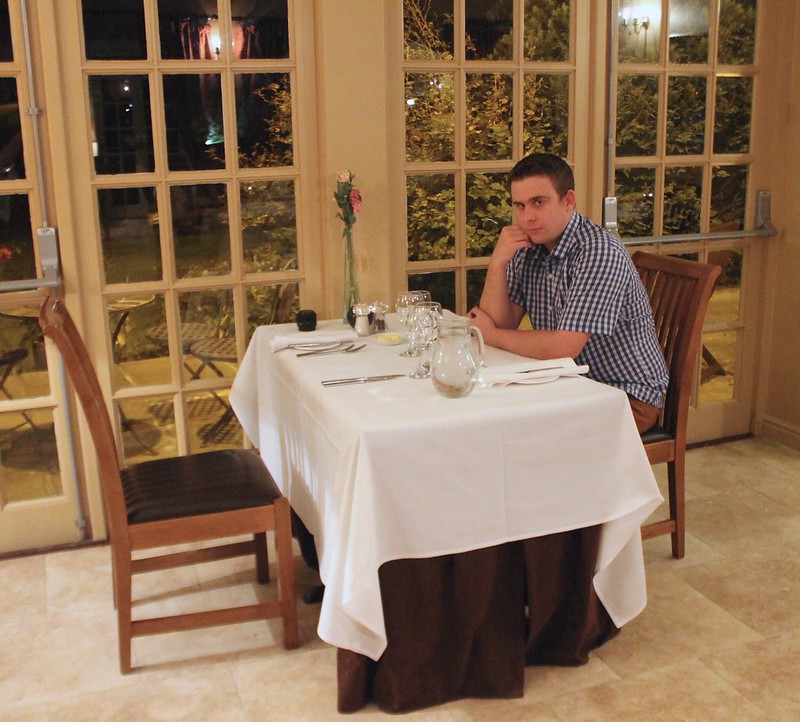 So you might remember that all the way back in November, Ben and I were invited for a weekend away to stay at Ox Pasture Hall near Scarborough. No? Well go read this post then! Anyway, back when I moved the blog over from Blogger to WordPress, there were a few little things went awry, and this post was one of them – it disappeared from the schedule! But no fear, I’m back with it now to give you a quick run down of the amazing food we sampled during our overnight stay there.
To be honest, the food was the part we were most looking forward to of the whole stay. Ben and I love food, especially good food and new things. I used to be extremely fussy when I was younger, but when I met Ben, he forced me into trying loads of new things including food I claimed to hate such as onions and tomatoes. Well, now you’d never know I’d once been so fussy! When he met me, I’d only recently tried pasta properly (I know!), and pizza and chips were my idea of a good meal (I have always liked most veg though to be fair). I’ll now eat pretty much anything I’m offered – I’ve even eaten bugs! – but am not fond of mince and sausages, then again, I will eat them where before I would have felt sick at the sight! Anyway, all the rambling is to say – I now love food and trying new things, so give me a good looking menu and I’ll jump on it. And as soon as we saw the Ox Pasture Hall menu, I was already choosing what I’d eat! Unfortunately though, I was a little bit poorly on the night itself so didn’t enjoy the food as much as I usually would (boo!), but no fear, as we’re planning a return to the hotel and restaurant again soon, and let’s hope I’m healthy enough to enjoy it properly this time!
So, above we have Ben sat at the table (which actually we were moved from almost immediately afterwards – turns out they’d sat us at the wrong one!), and the appetisers – a glass of bubbly each, some flavoured breads (really good) and a little mug of fresh tomato soup with sundried tomatoes. The tomato soup was seriously amazing – to think I never liked tomatoes before! – in fact, it was my favourite part of the whole meal, so creamy and tomato flavoured. 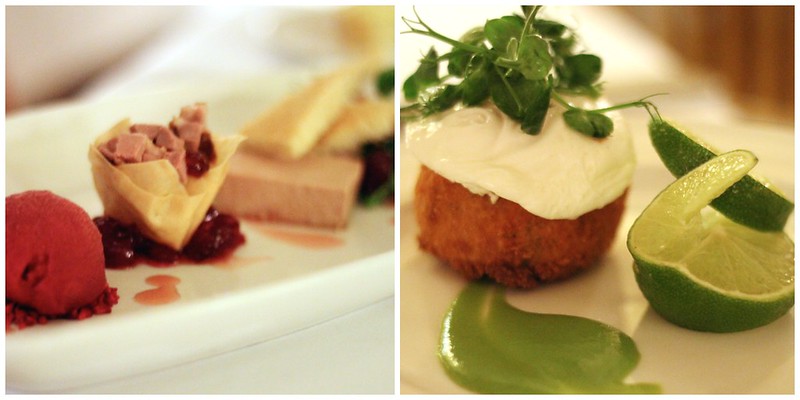 For starters, Ben chose the Duck starter which included duck liver pate and cherry sorbet among other yummy duck related pieces; I had the crab cake with a poached egg and pea shoots. Both were really tasty and so well presented – I can only dream of plating things up like that! 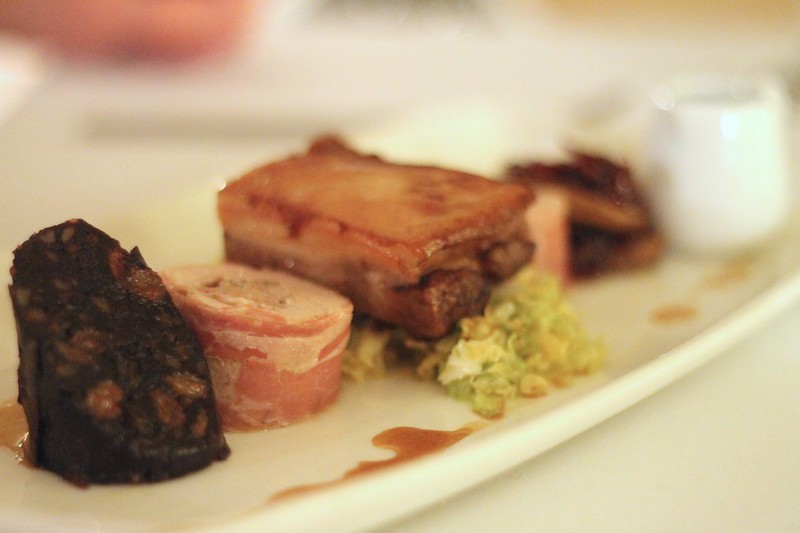 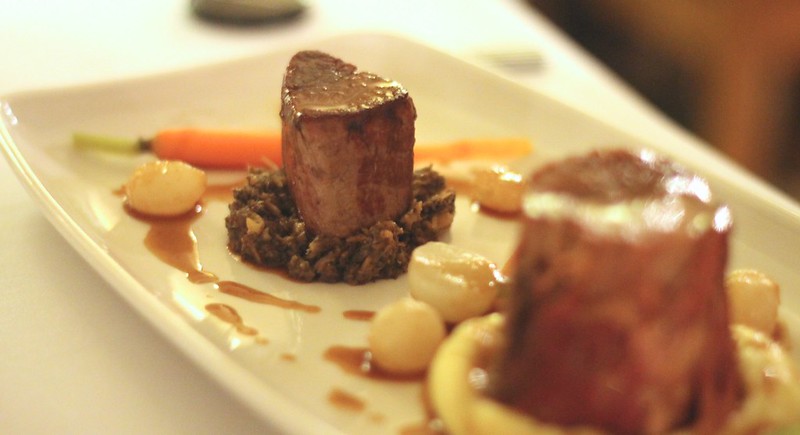 Main courses! Ben went for the Pork option which included a homemade black pudding, a piece of pork belly, a piece of pork tenderloin, savoy cabbage, sauteed potatoes and red onion marmalade. I chose the Beef – a mini beef fillet, a piece of brisket, creamy mash, mushroom duxelle and baby turnips and carrots. Again, both were so yummy, but unfortunately I mostly just managed to taste mine and not really eat it thanks to feeling quite poorly 🙁 The meats were all cooked to perfection, my beef was all very tender, and the dishes were thought through well so that everything complemented everything else on the plate. 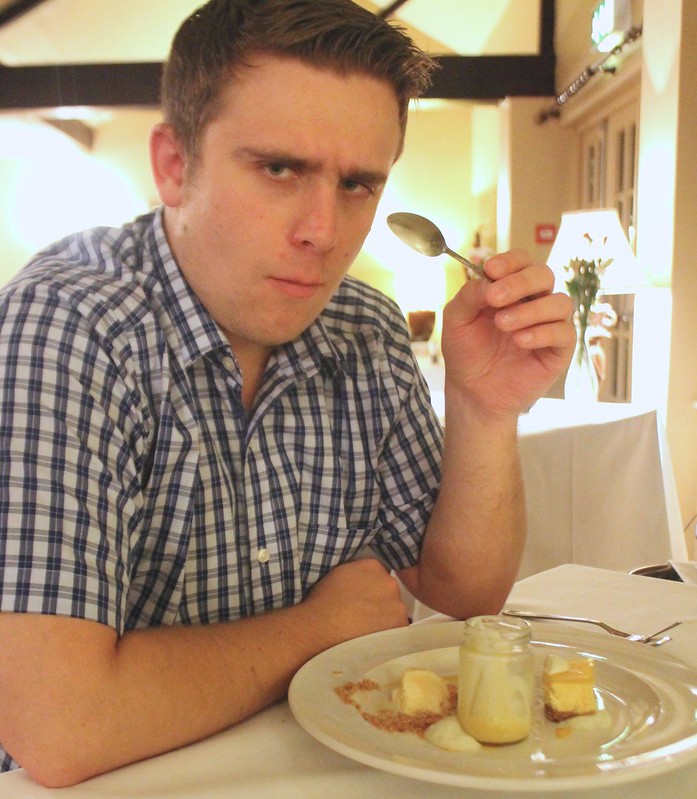 I just had to include this one! I desperately wanted a dessert after spotting them on the menu – they were several AMAZING sounding options (seriously, “Caribbean Cocktail” was one of the options, featuring cocobut panacotta, mango rice pudding and passion fruit sorbet), but again, due to feeling poorly (I’m sounding like a broken record!), I knew I wouldn’t be able to manage it. Ben did order one though and had the “Lemon” with cheesecake, yoghurt, warm mousse and lemon tart ice cream. Despite the odd look on his face, he very much enjoyed this! We finished up the meal with a drink each (mint tea in an attempt to make me feel better, more fizzy wine for Ben if I remember rightly), then headed back to the room. 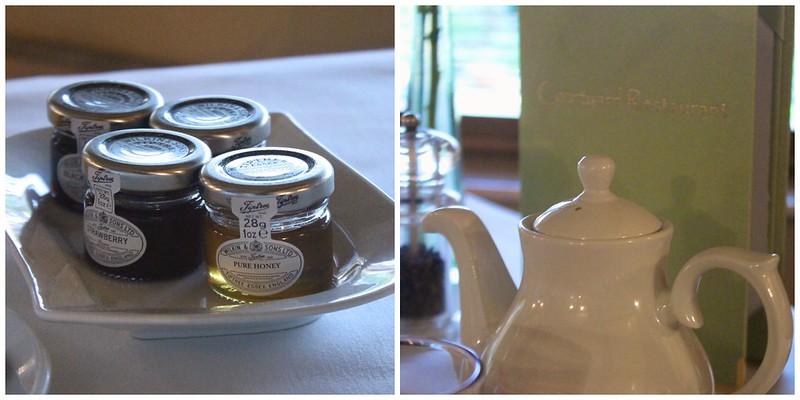 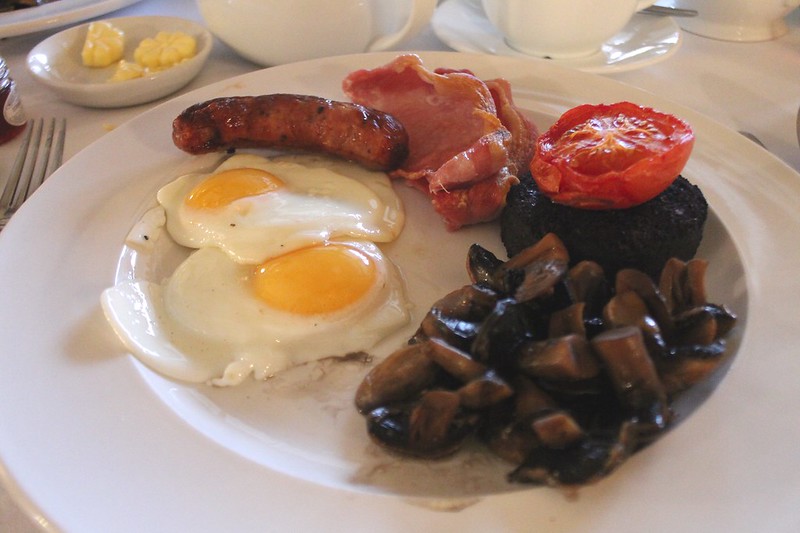 And I couldn’t end the post without mentioning breakfast, could I?! We got a pot of tea between us, tried the jams and honey on toast, and of course, had a cooked breakfast each to see us through the rest of the day. As I mentioned above, sausages are one thing I’m not bothered about eating, so I handed mine over to Ben in return for a few mushrooms. He does want me to mention though that the sausages were very good quality!
As I said before, we’re already planning our trip back there in a couple of months for our anniversary – I’m already looking at the menu again and choosing what to have!