I’ve seen a few variations on this “Things I’ve Liked” or “Things I’ve Done” over the years. Last night I couldn’t sleep (who woulda thunk it?) and was thinking about a podcast I’d been listening to and a series I’d been watching. I realised I really enjoy these things but I haven’t really talked about them on the blog all that much. So I decided I’d delve into the world of these blog posts and share what I’ve been reading, watching, listening to and doing recently. It’s a bit more of a personal look at my life so makes a nice break from the guide style posts I’ve fallen into the habit of writing recently – enjoy! 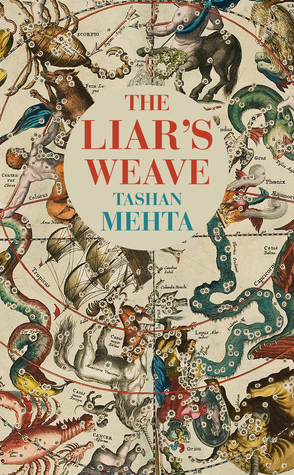 The Liar’s Weave – by Tashan Mehta. Before we start, Tashan is my friend Charley’s friend who lives in India – I’ve only met her a couple of times but she’s one of those people I know very well through a friend. But that does not influence my thoughts on her novel in any way. And seriously, I am stunned by this. I’m around a third of the way through but am taking it slowly because the writing is just so gorgeous, the setting so fantastic and the story so interwoven, that it needs to be taken that way to enjoy it to its full extent. More on this one soon, but seriously, this is a book that is just as beautiful (if not more so) than its cover.

The Walls – by Hollie Overton. I read Baby Doll by this author last year and enjoyed it, so this makes a good lunchtime reading book to dive into. More soon, again!

Then She Was Gone – by Lisa Jewell. This book balances up mystery, creepy and clever all in one go and I really enjoyed it. It was only just short of reaching my favourites list. Full review soon.

So apparently I’ve recently been doing a lot of watching! I mostly tend to spend evenings in front of the TV with Ben as it gives us that bit of downtime after work we need after working all day, coming home and making tea. We always watch things we both like on an evening, so if there’s something I like but he doesn’t, I tend to wait until he has to work on a Saturday (he used to work every Saturday, now just fills in on holidays).

American Horror Story – I’ve watched the first episode of Season 7 but didn’t really get into it. I plan to catch up on the rest sometime, but have recently rewatched Asylum and I think it’s overtaken Murder House as my favourite season.

Great British Bake Off – Ben’s absolute favourite. We were worried about the switch over from BBC to Channel 4, but controversially, we’re not missing Mary Berry all that much (sorry!) and are enjoying the refresh it’s had with the move. I think they’re coming up with better ideas that are more accessible – there were a lot of bakes in the last couple of series that no one had ever heard of!

The Yorkshire Vet – We watch this weekly as it’s set at a practice very local to us, so we often recognise friends and family on there! Some scenes can be a little graphic, but it’s also super interesting.

Riverdale – oh my goodness, I am seriously obsessed with this! We discovered the first season only a couple of months ago and watched them within a couple of weeks. Ben hates binge watching, but I actually got him to watch 2 episodes in a row of Riverdale! I love the slight teen drama aspect, the mystery, the setting – if Riverdale wasn’t so…corrupt, it’s totally the kind of place I’d want to live.

13 Reasons Why – I read this book about 4 years ago and enjoyed it but didn’t love it – I gave it 4 stars on Goodreads. When I saw it was coming out as a series, I was intrigued as it seemed like it would be a difficult one to get across onto a screen, but they’ve definitely succeeded. I put off watching it for a while, thinking it might be a bit heavy or I wouldn’t enjoy it, but I really did. Highly recommend it, but be careful of triggering suicide, self harm and sexual assault scenes.

I was given the opportunity to review a new service called Cinema Paradiso this month and that’s reopened my eyes to all the great movies out there. We used to use LoveFilm, but with them shutting down, there was a bit of a gap in the market. Cinema Paradiso is a DVD postal service where you pay a monthly subscription fee and DVDs are picked off your list and sent directly to you. They’ve been around since 2003 and have an impress library of more than 90,000 titles. I was able to test out a free trial for 2 weeks (and you can too!), but prices range from £4.98 per month for 1 DVD at a time and 2 per month, to £29.98 with 4 DVDs at a time and an unlimited amount per month. My 14 day free trial came with the usually £9.98 package of 2 DVDs at a time and up to 6 per month.

So how is this any different to your usual streaming services? To be honest, it’s not that much different except for the fact that you can get physical copies to watch, a broader choice in a single service and access to a lot more films than both Netflix and Amazon have to offer. Ben’s also let me know (as he works in home cinema & TV) that discs will also always be of higher quality than streaming is, so if you’re a stickler for video quality like he is, this is definitely something to bear in mind. I also like the fact that you’re getting post – woohoo! – and that it’s a surprise which DVDs you’ll receive from your list. Over this time, I received Maleficent, Inferno and La La Land from my list – a mix of different titles and genres, some modern, some not.

You receive an email letting you know when your DVD(s) is on its way, and for me, these have then arrived the day afterwards – super speedy and very simple! What we loved about it was the fact that they have lots of new releases as well as the option to receive 4K, 3D and UHD options too. When you sign up, there’s a very quick survey that allows you to select which format you’d prefer to receive your DVDs in. I’m looking forward to watching more on my list!

I also watched a couple of other movies too:

The Circle – I watched this alone then forced Ben to watch it too. He doesn’t get on with films (he gets distracted and wandered off) but enjoyed this one. I thought he might as it depicts a world not too dissimilar to our own now and makes for an excellent topic of conversation and debate. I also love anything with Emma Watson in, so it was a winner.

What Women Want – I spotted this film online and had to watch it – it was one of those chick flick type ones that we used to pick up in the “Video Shop” when I had sleepovers with friends in the early 2000s! It’s definitely showing it’s age a little but was fun to rewatch!

I don’t listen to a lot of music, mostly because I have very specific tastes and tend to listen to the same thing over and over! So those same things recently have been:

Disney’s Fantasmic – yes, this is the soundtrack to a show in Disney, and yes, both Ben and I listen to it daily. We can dream we’re back in Disney if we want to, okay?!

I Choose You – by Sara Bareilles. I discovered this song recently and have been playing it on repeat.

Lullatone – I literally read about this in Jimsy Jampot’s newsletter today and then forgot to take my headphones out as I carried on working, it was that good! I don’t normally listen to music when I work, but this just blended into my background.

Then podcasts. I’m planning a full post on all the podcasts I have in my listening list soon, but for now, here are the two podcasts I’ve been listening to over the past couple of weeks:

And That’s Why We Drink – Michelle recommended this podcast and I’m addicted! Em and Christine take you through one paranormal and one true crime story per episode, while sipping on wine and milkshakes – the world’s a scary place, and that’s why they/we drink! This podcast hugely appeals to two things I love – ghosts and unsolved mysteries, so it’s like the perfect podcast match for me.

Just A Story – seriously, Michelle’s recommendations are the best because this is another fave she’s talked about! Just A Story is a discussion of urban legends told by husband and wife duo Jake and Sam. I love creepy stories and the myths behind them, so this is another perfect pod for me. Plus Jake and Sam’s chemistry is obvious throughout – they laugh at themselves and each other which is really fun.

Two weekends ago, Ben and I had our pre-wedding photoshoot with our photographer – eek! It came as part of our package which I was very pleased about, Ben not so much so! He doesn’t like having his photo taken. In the end though, he was glad to have it done as it meant the opportunity to meet Jemma properly and to get to know her a little. I’ve read so many things where people say how well they got on with their wedding photographers and how they made them feel at ease and I’d worried to no end that we’d be the exception to the rule and find it awkward and uncomfortable. This was not the case at all. Jemma is very relaxed with her photography and we were laughing the whole way through the photoshoot. I’m betting she had plenty of stupid face pictures she had to delete because of it – I kept pulling faces by accident! Above is a sneak preview of our photos and I’m waiting very patiently (not) for the rest to arrive!

After doing a Tough Mudder during the summer, my office has got obsessed with these kind of events! They did a Yorkshire Warrior (which I missed due to a Brownie trip) then this weekend, we ran an Inflatable 5K. It was really fun, but I was kind of disappointed as we’d all had a horrendous office cold which meant more than a few of us were gasping for breath through congested chests throughout. I found it harder than the Tough Mudder because of this! Nevertheless, I conquered every obstacle (including the terrifying Leap of Faith) and came out of it with another T shirt and my first sporting medal. And a very blistered and injured foot, but we shan’t talk about that ;D

It was also Ben’s 30th birthday this week, so we celebrated that at the weekend with his family – a meal at a local pub then back to his great aunt’s house for the “after party”. We call it that, but it’s really just 14 or 15 of us sat in the garden (which was possible in mid-October for the first time ever!) chatting and playing with William and Lydia, Ben’s two young cousins. Ben and I are also celebrating by going out to a local restaurant which is Michelin rated tomorrow evening which we’re really looking forward to. And my parents got Ben a voucher for the Best Restaurant in the World which is nearby too – I’m serious! You can probably tell he likes good food from these presents!

What have you been reading, watching, listening and doing recently?